Wondering if your Android phone supports the new A/B system updates? Through this post, you will be able to check Seamless Updates support on Android devices.

When Android 7.0 was first launched, it bought a couple of new features. Even before the official launch, Google announced a new feature that will accompany the first Pixel series phones. This was the new A/B partition system on the original Google Pixel and Pixel XL devices. The new partition layout completely changed how the way how software updates were handled on an Android device, known as ‘Seamless Updates‘.

While Google itself was the first to opt for the new A/B system partitions on their first and second generation Pixel devices, other OEMs started to join in as well. The list of supported devices is quite limited at the moment, but we are quite sure that in the coming time, this new layout will be served as a standard across multiple Android manufacturers. So, if your favorite OEM has recently announced a new device, and you can follow the simple steps below to check Seamless Updates support for your Android device. 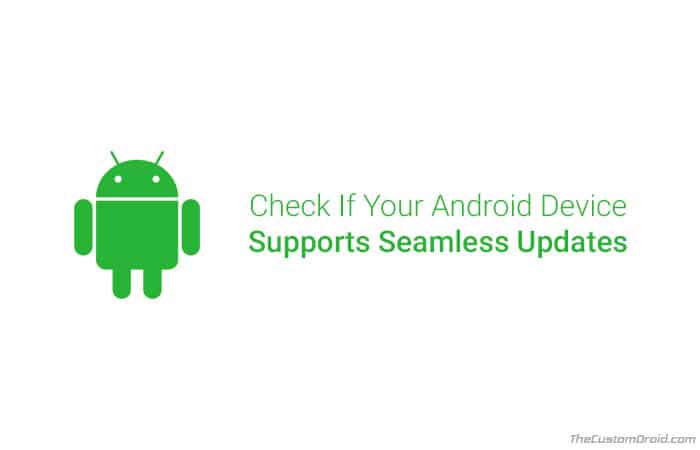 Android devices have a standard way of updating the software, known as Over-The-Air (OTA) updates. We have already covered the process of how an Android OTA update rolls out. While we can’t really control how fast a manufacturer pushes the updates, but with the new feature, we surely have a better chance of installing them without disturbing our current operations or usage. Normally, once an OTA is downloaded, your phone will automatically boot into the stock recovery, check the system integrity and perform the update. Already sounds troubling, doesn’t it?

Before you check Seamless Updates support, read a bit more about what the feature actually is.

What are Seamless Updates or A/B System Updates on Android?

Android devices that support the new partition layout have two sets of partitions, referred to as Slot A (a_slot) and Slot B (b_slot). So, your phone will always be running on a single slot (current slot), while the unused one stays completely intact. So, when an OTA update is downloaded, it is directly installed on the inactive partition slot, that is why they are known as ‘Seamless Updates’. All this while your current usage will stay undisturbed. And once the installation is complete, you will just need to reboot your phone like normal. Upon the reboot, the OS will automatically switch to the second slot or vice-versa. 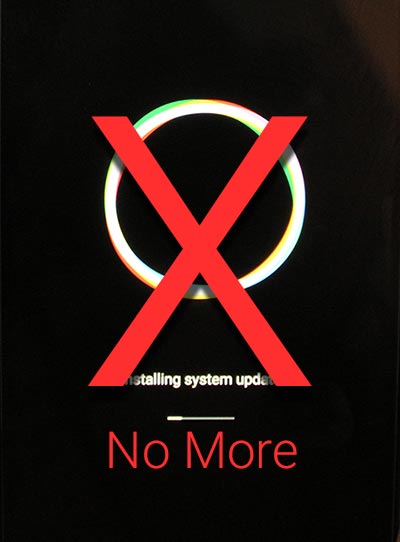 While manufacturers are not forced to do so, it is highly likely that will soon start adapting to the new partition on their upcoming devices. Currently, the Google Pixel 3/3 XL, Asus Zenfone 6 2019, Essential Phone, Moto Z2 Force, Xiaomi Mi A2/Mi A2 Lite/Mi A1 are a few devices that already support it.

This has a set of advantages and also a few disadvantages. The advantage is that you will less likely to get any stuck in a bootloop or run into errors after performing an update. In such a case, your Android device will automatically boot into the previous slot and use it as a failsafe.

Now, let us talk about the disadvantages that it holds. The first one is that has already proved to be a serious hindrance to the development scene. For example, the 2016 Pixel/XL users had to wait for months before they could actually have the things rolling, like working root, a custom recovery, and ROMs. Developers had to work on several new methods to get around the A/B partition layout. However, after more than a year now, the community has managed to surpass such issues. The next disadvantage is the extra storage space that the system consumes due to two sets of partitions.

It is not something that you would normally find on your phone’s spec sheet elsewhere. ‘Seamless Updates’ is a feature that resides in the OS itself. So, if you have just got a new Android phone, you can easily follow the instructions below to check Seamless Updates support on your device. The availability of Seamless Updates could easily be checked using a shell command on your device itself OR by using a third-party app.

Another way to check is by using an app called ‘Treble Check’. Simply install Treble Check on your Android device and run it. While it is mainly focused on telling if your device has Project Treble support, it also provides the information on whether or not the Android phone supports A/B partition system. 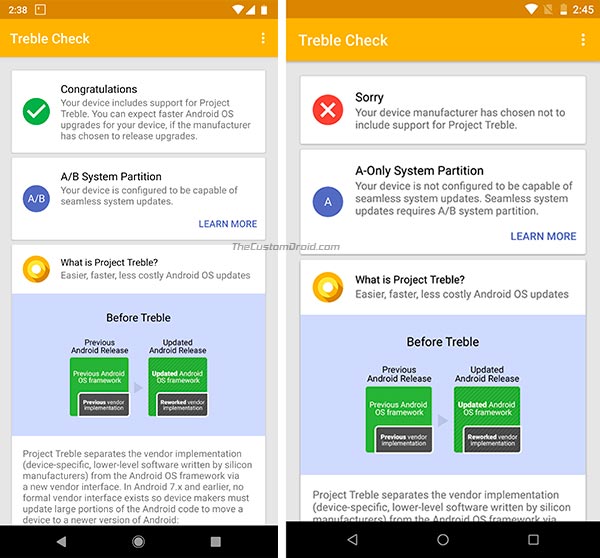 So these were two ways to check Seamless Updates support (A/B System Updates) for your Android device. It’s certainly not possible for older devices with only single partitions to support it.