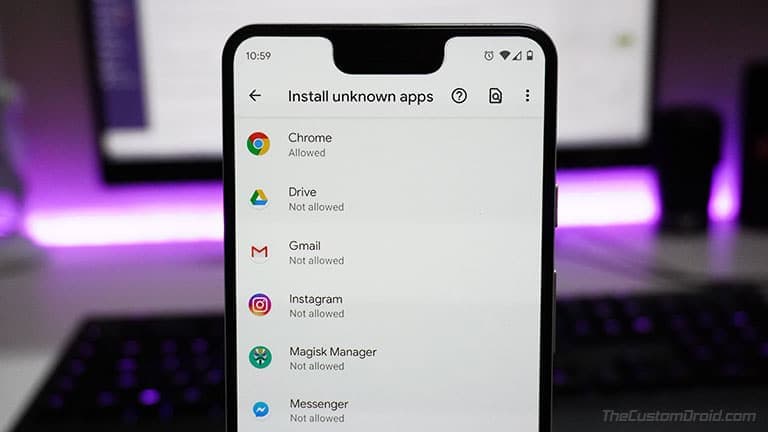 Sideloading or Manually installing APK files on your phone/tablet can help you get apps that are not available on the Google Play Store. The process is quite easy and could be finished with just a few taps. But there are a few things that you must do first. In this post, you will learn what an APK file is and how to manually install Android APK Files.

The instructions below can be followed for any Android smartphone or tablet running Android 10, Android 9 Pie, Android  8.1/8.0 Oreo, Android 7.1/7.0 Nougat, Android 6.0 Marshmallow, or below.

What is an APK?

Android Package Kit (abbreviated as “APK“) is the standard file format for mobile apps used in the Android operating system. An APK file to Android is what an executable EXE file is to the Windows OS. It is an installer file that you can open in Android to install applications.

When would you need to manually install an APK?

The Google Play Store is filled with millions of Android apps that offer a variety of features that make our lives easy. And it is surely the safest and most recommended way to get apps. But that doesn’t mean that it is the only place where you can download and install apps on your Android phone. There are certain apps that you may not find on the Play Store due to various reasons. Now in such instances, you may need to manually install the Android APK file of the said app(s).

A few of these instances when you’d need to manually install an APK have been listed below:

So whatever your reason may be, you can download and manually install Android APK files pretty easily.

Now before you head below to the instructions; a word of caution.

Warning: Not all apps available outside the Play Store are safe. Make sure that you do not download pirated apps, which may also contain malware. And also, stray away from online websites/resources that might distribute them.

Always download APK files from reputable sources (like the ones we have linked below) or those which are directly distributed by the app’s developer.

But if you’re absolutely sure of what you’re installing, then Android does offer a simple option with the settings menu, which when turned on allows the installation of APK files. Once this option is turned on, you can download the APK file of your desired app and use the in-built Package Installer to manually install the Android APK file on your phone.

Now we have covered the complete process in the instructions below.

The first step is to enable ‘Install unknown apps’ on your Android phone running Android Oreo and above, or ‘Unknown Sources’ if your phone is running Android Nougat and below. We have split the instructions into two sub-steps depending on the Android version installed on the phone.

Step 1.1: Enable ‘Unknown Sources’ on Android Nougat and Below

With Android Oreo, Google replaced the ‘Unknown sources’ option and introduced a more granular model of controlling which sources are allowed to install apps from unknown sources. The new option can be enabled as follows:

With the option enabled, your phone is now ready are now ready to install Android APK files.

The installation could take a few seconds to finish. Once it is, the app should be installed. You can now launch it from the app drawer of your phone.

Now before you leave, know that Google Play Store is still the quickest and safest way to install apps on your Android device. It’s Play Protect protection mechanism makes sure that all apps are free from malware even before you install them. So, you should only resort to the manual installation if and when necessary. And it would also be a good idea to disable the installation of apps from unknown sources to further prevent any malicious installations.

More from our Android 101 Series:

So, this was our guide to sideload/manually install Android APK files. We hope you found it to be helpful. This post is also a part of the Android 101 series where we cover basics of using and operating Android devices. If you have any questions regarding the APK files or their installation, feel free to let us know through the comments.