Through this page, you can download Samsung’s Odin Flash Tool for Windows computers. This includes the latest version of Odin, as well as all previous versions, along with a handful of patched versions.

Further, we will discuss some of the common uses of the Odin tool, its terminology, and show you how to use Odin to flash stock firmware on Samsung Galaxy devices.

Odin (also called Odin3, Odin Downloader, or Odin Flash Tool) is Samsung’s official firmware flashing software for Windows that communicates with Galaxy devices in Download Mode. It can be used to flash official stock firmware for manually installing software updates or unbricking the device. It can also be used to flash custom recoveries (such as TWRP or Safetstrap) or Magisk patched firmware binaries for rooting.

The tool is generally used by Samsung internally, in their authorized service centers, and in their factory for flashing and testing the software. However, it was leaked out to the public through XDA-Developers and is now freely available for the end-users to use.

Below, you will find the links to download all versions of the Odin Flash Tool, including the latest version as well as some patched versions.

Which version of Odin should I download? – In most cases, it’s strongly advised to use the latest version of the Odin tool as it supports flashing Android 11 (One UI 3.1) and Android 10 (One UI 2.5) firmware on the latest Samsung Galaxy devices like Galaxy S22, Galaxy Note 20, Galaxy Z Flip, Galaxy Tab S8, Galaxy Tab S6 Lite, Galaxy Fold, etc.

More recently, a newer version of the tool, that is v3.14.4 has been floating around the internet. According to XDA member/developer realbbb – “It appears to be a hacked version 3.14.1 (same filesize); has internal modifications and includes a known cloud-based client-server communication dll (cpprest141_2_10.dll)“.

Here’s a little discussion between the users on the same topic over at XDA.

If you want to use an older version of the Odin tool, refer to the table below for all the versions and their corresponding download links.

Modded and patched versions of Odin

Now, here are some known patched versions of the Odin Flash Tool. These are often used while performing procedures like rooting, installing a custom recovery such as TWRP, flashing custom binaries, etc.

This version was patched by XDA Senior Member realbbb and sourced from the official XDA thread. It allows you to bypass “FAIL! Model mismatch fail”, “FAIL! SHA256 is invalid”, and “FAIL! Blocked carrier” errors in Odin:

Raymonf’s version is needed when flashing custom binaries on the Snapdragon Galaxy S9/S9+ and Note 9 sold in the US.

This version is generally needed when flashing firmware or custom binaries on Snapdragon models of the Galaxy S8, Note 8, and Galaxy S7 sold in the US.

Now that you have been able to download the Odin flash tool, let us move forward and take a look at its usages, terminology, and instructions on how to use Odin to flash the firmware.

To sum up, the Odin Tool is useful for both an average user and an enthusiast who wishes to customize the software on their Samsung Galaxy device.

Odin is a very easy-to-use Windows software and most of the options/parts of its GUI are pretty self-explanatory. However, for someone who’s new to the software, it could also be confusing initially.

So below, I have listed all the different options available in the Odin tool GUI that you’d be using, along with a brief explanation for each of them.

Some Myths & Misconceptions Regarding Odin

Since Odin is a very popular tool, it does attract a fair share of misconceptions from various online communities and resources.

According to Wikipedia – “There is no account of Samsung ever having officially openly released Odin”. The software was rather leaked out to the public through community forums such as XDA-Developers.

So, if you come around any online communities/websites claiming to be the official source of the Odin tool from Samsung, you have probably opened the wrong link when you searched.

Odin does not require USB debugging

Use Odin to Flash Firmware on Samsung Galaxy Devices

Odin is a portable software, which means that you can just run it by launching the included executable file on your PC without any installation. To run the flashing software on your Windows machine, download the Samsung Odin tool from the links above. Then extract the downloaded ZIP file to a suitable location on your computer.

Next, open the extracted folder and simply double-click on the Odin executable file (e.g. Odin3 v3.14.1.exe) to launch the Samsung Odin tool on your PC. 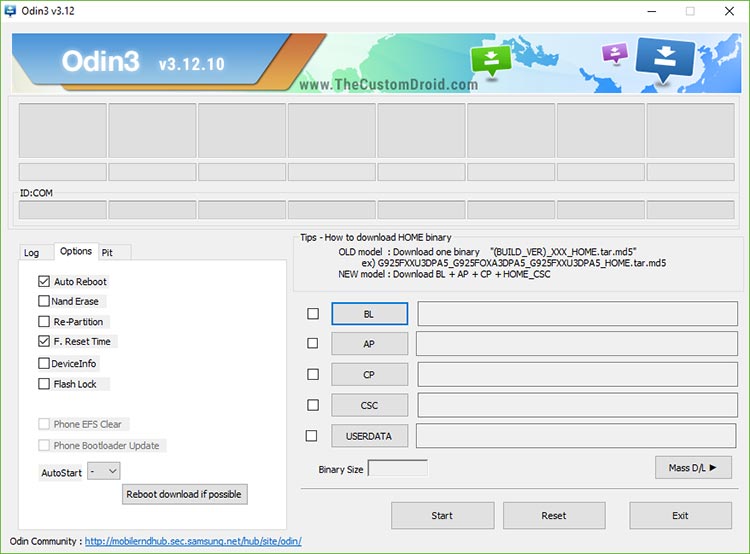 So by now, you have been able to download Odin Flash Tool and learned about its common use-cases, terminology, and also how to use it to flash the firmware.

The tool plays a very crucial role when it comes to dealing with the software on Samsung Galaxy devices. If you’re an average user, you can use Odin to flash the firmware to manually update the software. If you’re an enthusiast who likes tinkering with the software, then Odin can be used to install TWRP recovery and gain root access. In which case, it is also the tool you’ll rely on if you ever wish to restore the stock firmware or unbrick your Samsung Galaxy device.

If you have any questions regarding the software or its usage, feel free to ask. When asking for help, please mention details like your Samsung device’s name/model, CSC code, and the Android version installed.