Samsung is already rolling out Oreo for the Exynos variant of the S8 and S8+. But there’s still no official news on when the 2016 S-series devices will receive the update. However, there has been a recent chatter that has surfaced. According to AndroidU.ro, some user in the S7/S7 Edge Telegram group posted two images of an S7 Edge (G935F) running Android 8.0 Oreo. Allegedly, the said user received the update accidentally. Well, we are not sure whether the screenshots are authentic or not. But even if they aren’t, you still have the chance to install Android Oreo on Galaxy S7 Edge using the Samsung Experience 9.0 ROM.

XDA senior member ProtoDeVNan0 has come up with Samsung Experience 9.0 ROM based on Android Oreo. Like the stock firmware, the ROM also runs updated Samsung Experience 9.0. The developer was able to compile the ROM because of the added contribution of another member – Kill-switch, who recently provided the full system and kernel dump of the S7 Edge firmware. The ROM can only be flashed on the G935F model of the S7 Edge (Exynos). Before you even follow the steps to install Android Oreo on Galaxy S7 Edge, let us talk a bit more about the ROM itself. 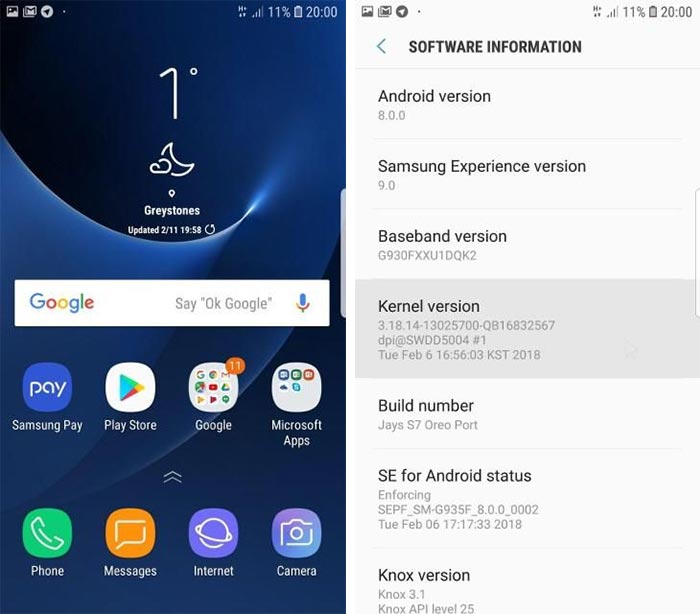 Samsung Experience 9.0 ROM sports January 2018 security patch, which does indicate that Samsung probably testing the update internally. The developer has further taken a step, debloated the ROM and fixed S-Health app issues. His focus is to keep the ROM as close to stock as possible. While all else works flawlessly, a few users reported that Samsung Gear was not functional. A quick tip from another member indeed fixed the problem. All you have to do is, grab the latest Gear S Plugin APK and install it on your device.

It’s quite an exciting news for those using the device since they have been long expecting to see the Oreo update. So, if you totally dig flashing custom ROMs, then go ahead and follow the steps to install Android Oreo on Galaxy S7 Edge.

The ROM developer suggests users to Format Data via TWRP, in order to avoid any issues. He has also provided a flashable zip to disable forced-encryption on this ROM.

Once you have fulfilled the stated requirements, go ahead and install Android Oreo on Galaxy S7 Edge.

Your Samsung phone will boot into the updated firmware. If you further want to root your S7 Edge running Oreo, you can download latest SuperSU and flash it using TWRP.

The leaked screenshots and system dump clearly indicates that Samsung is already working on the update for the S7 series. Yet, there’s still no news of any public beta program to be announced. Until it is official, using the Samsung Experience 9.0 ROM seems like a really convenient option. Users have already claimed that the ROM itself works flawlessly and the performance is outstanding.

There you go! You have just been able to install Android Oreo on Galaxy S7 Edge. Those who have already installed the ROM, have managed to run into some issues. After browsing the official release thread, we have been able to find solutions to some of the common problems.

So you have just been able to install Android Oreo on Galaxy S7 Edge using Samsung Experience 9.0 ROM. If you have any questions, ask us through the comments.