Samloader is a cross-platform replacement for firmware downloading tools like SamFirm and Frija. In this guide, we will show you how to download and use the Samloader Tool to download stock firmware updates for your Samsung Galaxy device.

Unlike many other Android device manufacturers, Samsung doesn’t make stock firmware packages for their Galaxy smartphones and tablets available for the end-users. Thus they do not officially provide the device-owners the ability to flash the software on their phones/tablets in any manner. The stock firmware file could be extremely helpful when dealing with/fixing software issues, for manually upgrading the Android software, and also for restoring the stock firmware to unroot and unbrick the device.

For a long time now, stock firmware update packages for Samsung devices have been made available unofficially through online databases such as SamMobile, Samfrew, Updato, etc. Since the firmware packages are quite large in size (2-6 GB) and online storage is an expensive resource (to say the least), these databases limit the download speeds for free downloads (which we think is fair).

This certainly made it difficult for users to quickly download the stock firmware for their Samsung Galaxy devices in moments of need. This issue was resolved with the release of the SamFirm tool, and the Frija tool after that. The said tools allow users to download Samsung stock firmware updates directly from Samsung’s official servers without any data speed caps.

So how is Samloader different from SamFirm & Frija? There’s nothing wrong with these tools, they both still work fine and do their job well. However, there’s one particular limitation that comes to one’s mind when using these tools.

Both SamFirm or Frija tools WORK ONLY ON WINDOWS computers and are NOT OPEN-SOURCE. They use a particular library from Samsung’s Smart Switch software to authenticate with the Samsung Firmware Update Servers. The said library is protected by an advanced Windows software protector (Themida), which makes it extremely difficult to port these tools to other operating systems.

The developer (nlscc) reverse-engineered the download protocol used by Smart Switch and wrote a cross-platform tool known as “Samloader”. This means you can use Samloader to download stock firmware from Samsung servers on any computer with Windows, macOS, and Linux. Moreover, since it’s possible to use Python on Android as well, the tool could also be used on any Android device. We are already testing to see if it works and will update this page with more info regarding the matter.

The only little downside of using Samloader is the absence of a user-friendly GUI, something that’s offered by SamFirm and Frija tools. However, you might consider this as more of a learning curve than an actual downside. It will give you the basic idea of using Python-based tools, not just Samloader, but other useful tools as well, such as Payload Dumper.

Since its initial release, the tool’s syntax has been updated and is now comparatively easier to understand. If you are currently using a previous version, make sure to download the latest version of Samloader from Github and configure it again.

Below is a reference for the syntax used by Samloader to communicate with Samsung servers to download the stock firmware for your Galaxy device. (Source: Github README) 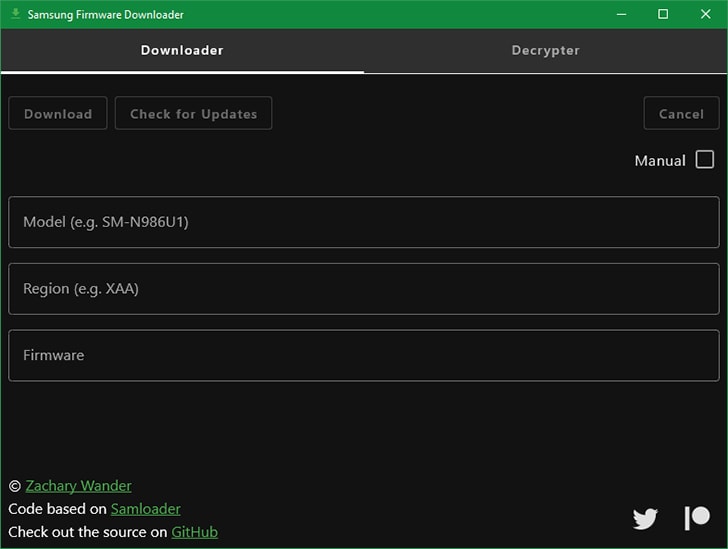 XDA Recognized Developer Zacharee1 has built a new tool based on Samloader that offers a Graphical User Interface (GUI) for users who are not comfortable with using Command-line Interface (CLI).

This new tool is called – “Samsung Firmware Downloader“. It was released by the developer over the XDA-Developers forum and has already started receiving due attention and appreciation from the forum members.

But don’t we have GUI-based firmware downloading tools like Frija and SamFirm already? Yes. But they are not open-source, and more importantly, they only work on Windows. On the other hand, the new “Samsung Firmware Downloader” tool works across different platforms like Windows, Linux, macOS, and even Android.

Yes, you read that right, it supports Android as an app. Since Python can be installed, and Samloader is a Python-based program, it was already possible to use it on Android. But now, it gets even better as you don’t have to mess around with CLI commands and enjoy a user-friendly interface.

Of course, you have to download the tool depending on the platform you’re going to use it on – Windows, Linux/macOS, or Android. If you’re a developer who’d like to contribute to the project, then you can view the source code on GitHub.

This is an initial release, so you might face some issues. If you encounter bugs, please report them over at the GitHub Issues section.

Samloader tool works for all Samsung Galaxy smartphones and tablets, from the newer ones such as Galaxy S20 and Note 20 series, all the way back to the older devices.

Since the tool is Python-based, not everybody would know how to use it out-of-the-box. So, we have laid down step-by-step instructions below for an average user, to guide you from setting up Python on your computer to downloading and using the Samloader tool.

Without any further ado, let’s begin.

Step 1: Install and set up Python on your computer

Since the tool is written in Python, you’d first need to install and set up Python on your Windows, macOS, or Linux computer. To do this:

Once you have installed Python, restart your computer to ensure that Python is added to the PATH variable.

The second step is to download the latest version of the Samloader tool to your PC. This can be done in the following two ways.

Now, you must open the command-line window on your PC inside the folder where the tool and its required files are present. Depending upon your PC’s operating system, follow the provided instructions.

At this point, everything on your computer is ready and you can now use the tool.

The fourth and final step of this guide is to use the Samloader Tool for downloading the stock firmware updates for your Samsung Galaxy device. To do this,

Once done, you can extract the decrypted firmware update (.zip) to get the individual firmware files (AP, CP, CSC, BL, etc). From here on, you can download Odin and use it to flash the stock firmware update to your Galaxy device.

Downloading the stock firmware files for Samsung smartphones and tablets is often confusing because the manufacturer doesn’t officially publish them online for end-users. Moreover, it is also troublesome, given that users ultimately had to rely on third-party online firmware databases, which offer slow download speeds. And that’s where firmware downloading utilities prove to be indespensible.

Samloader is indeed a great tool, for one it is open source, and two that it works across multiple platforms (Windows, macOS, Linux, and more). These things make it a better alternative to tools such as Frija and SamFirm. We would like to thank nlsccc and everybody else associated with the development of this tool.

If you’re a developer and wish to contribute to the project, you can create a pull request on the official Github repo. If you face any bugs/issues while using the tool, you can report them to the developer here. We already came around a minor bug and reported it, and the developer was extremely quick in fixing the issue and pushing it to Github.

Also, if you have questions regarding the tool’s usage, you can post a comment below or consult with the developer directly on the official XDA forum thread.