Samsung has indeed come a long way since Samsung Experience and moved on to One UI as the default UI skin on all its phones and tablets. No doubt, One UI is great, fast, a bit more pleasing to the eyes, and much improved in terms of overall user-experience.

Even with One UI, there’s something in particular that Samsung hasn’t been able to completely get rid of. Yes, we are talking about the system apps that come preinstalled on the Galaxy Tab A7, and every other Samsung Galaxy device for that matter.

Samsung forces certain apps at a system-level on its devices

Despite all the improvements in One UI, the OEM still forcibly delivers apps to its device users that are often useless to end-users. These are what we call “Bloatware”.

These preinstalled system apps not only acquire space in the device’s storage but may also sometimes include services that might run in the background. And thus hog the system memory and affect the battery life.

Microsoft’s Office, OneDrive, Outlook, and Netflix are a few examples of these pre-installed system applications. Of course, it’s completely subjective to what is actually considered as bloatware and what is not.

Although there is an option to individually disable such apps in the Settings, that doesn’t stop the specific app(s) from using the storage space. In this tutorial, we will be using ADB to completely remove bloatware from Samsung Galaxy Tab A7 10.4 without root.

List of Package Names of Preinstalled System Apps on the Galaxy Tab A7 10.4

Below, you will find the complete list of package names for the majority of system apps that come pre-installed on the Galaxy Tab A7. The following list shall act as a reference for the system apps that you want to uninstall using the instructions in the next section.

A few things to note

If you couldn’t find the package name for a specific app you want to remove in the list above, then don’t worry. The instruction below has some alternative ways that you could use to get the package names.

How to Remove Bloatware from Galaxy Tab A7 10.4 without Root

Uninstalling system apps through ADB is quite easy. The trick isn’t new, I have personally been using ADB to remove bloatware from different OEM devices for years. To help you easily understand the process, I have the instructions broken down into a few simple steps.

The first step is to enable USB debugging on your Galaxy Tab A7. It’s a special debug mode on all Android devices that needs to be enabled in order to work for your computer to recognize your tab and execute ADB commands. 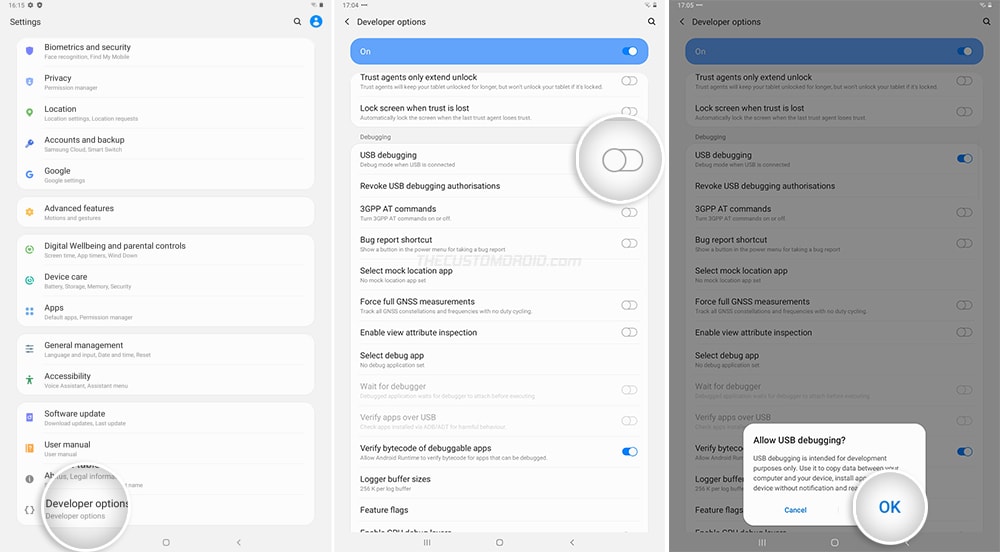 The USB Debugging option resides inside the ‘Developer Options’ menu in the Settings. This menu is by-default hidden to prevent accidental access. The tutorial linked below will walk you through the process of enabling USB debugging in a step-by-step manner.

Step 2: Install ADB on your Computer

Now, you need to manually install the ADB tool on your computer. While you might find yourself inclined towards using one-click ADB installers like Minimal ADB and Fastboot, I wouldn’t advise that. That’s because these installers may contain outdated binaries of the tool which might not work on the latest Android versions.

Don’t worry, the manual installation is quite easy. To begin, download the latest Android Platform-tools package for your computer using the links below.

Extract the downloaded ZIP package to get the “platform-tool” folder. This folder should contain the binary files of the ADB tool, along with the rest of the Android platform-tools. 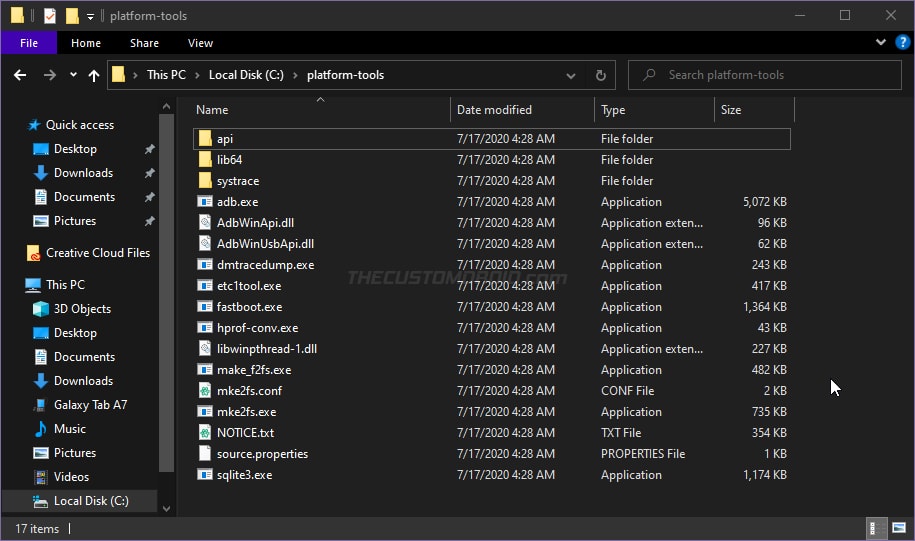 Step 3: Launch the command-line inside the ‘platform-tools’ folder

When entering the command(s) in PowerShell on a Windows computer, make sure to precede them with a dot and backslash [.\]. In macOS/Linux Terminal, these commands should be preceded with and a dot and forward slash [./].

Step 4: Verify the connection over ADB

Now that everything is ready, connect your Galaxy Tab A7 to your computer using the USB cable. Your PC will automatically recognize the tablet over the ADB interface. To verify the connection, enter the following command in the PowerShell/Terminal:

As soon as you enter the above command, you will be instantly prompted to allow USB Debugging on your Tab A7. Check the “Always allow from this computer” option and press “Allow”.

The command-line should return your tab’s unique ID like so:

Step 5: Get Package Name for the App you Want to Uninstall

Before you could start removing the bloatware, you have to get the package names for the system apps you want to uninstall. You could simply refer to the list we shared above for package names of the most common system apps.

If you could not find the package name for a particular app in the list above, there are a couple of ways to get it.

Once you have the package names for the system apps you want to remove, it’s time to uninstall them using ADB.

To do this, initate the ADB shell on your computer using the following command first:

Now, enter the following command to uninstall the preinstalled system app and remove the bloatware from your Samsung Galaxy Tab A7:

As soon as the command is entered, ADB will uninstall the app and show a “Success” message in the command-line window.

You will need to repeat the commands for different package names corresponding to the apps that you want to uninstall. To verify that the commands worked and the apps were uninstalled completely, go to

Generally, users often think that removing bloatware and getting rid of the preinstalled system apps could only be done through root access. Removing bloatware via root is rather an extreme measure and should definitely not be the primary reason for you to root your Galaxy Tab A7. In that case, getting back the removed system app could only be done by re-flashing the stock firmware.

But with ADB there is a very good possibility of reverting the change easily. So if you accidentally removed a package that you didn’t mean to, or if the removal caused any errors, you can easily restore the app by using the following command:

Again, you should replace “<app-package-name>” with the actual name of the package you want to reinstall.

So by now, you have learned how to properly uninstall system apps and remove bloatware from the Galaxy Tab A7 without root, using ADB. The process was fairly simple and shouldn’t take more than a couple of minutes. If you have any questions or find yourself in a difficult position while performing the instructions, let us know.

How to Restore Samsung Galaxy Tab A7 10.4 Back to Stock Firmware

How to Perform a Factory Reset on Galaxy Tab A7 10.4