In this tutorial, we will show you how to get Google Pixel 3 Flip to Shhh feature on your Android device. The feature can be easily used on any Android phone using Tasker.

The Google Pixel 3 (XL) was launched recently and it comes with quite a list of unique features. One such feature that was exclusively demonstrated during the launch event was ‘Flip to Shhh‘. The feature does exactly what it reads. Once enabled, flipping the phone and resting it on the screen will automatically enable ‘Do Not Disturb’ mode.

Google Pixel 3’s Flip to Shhh feature is part of the Digitial Wellbeing program that introduced in Android Pie. It is basically a set of features that aim at balancing your day-to-day life and smartphone usage. Digital Wellbeing itself is still in a beta phase and only available for the Pixel and Android One devices running stable or beta Pie firmware. 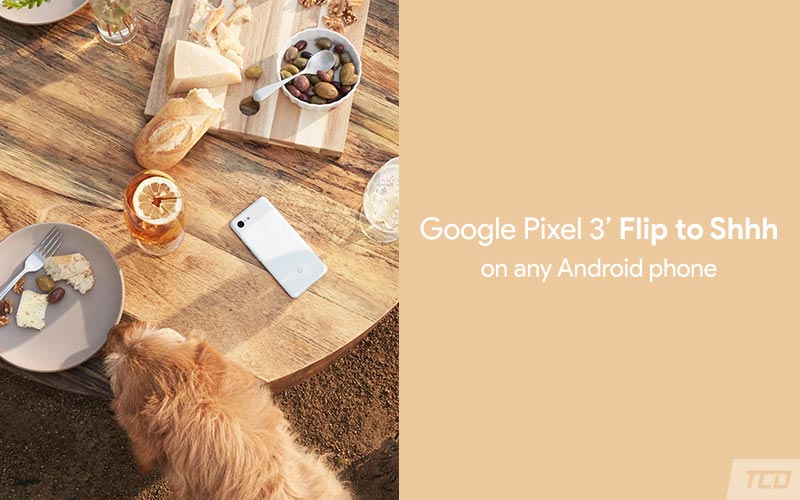 Now before we show you how to enable Google Pixel 3 Flip to Shhh feature, take a minute to understand what permissions does the specific task requires. The task requires ‘Notification Access‘ and ‘Device Admin‘ permissions to work properly. The former will help put the phone in Do Not Disturb mode when it is flipped over on the surface. The latter will put the phone into sleep mode (Turn off the display) when the phone is flipped over (Via: XDA-Developers).

How to Get Google Pixel 3 Flip to Shhh Feature on your Android Device?

You must first install Tasker on your phone. Although it is a paid application but is definitely worth buying. Automating the ‘Flip to Shhh’ feature is one of the thousand cool things you can do with it. Once you have it installed, follow the simple steps below.

Now try putting your Android device upside-down on a surface. You shall instantly hear a beep sound ensuring that Flip to Shhh has been launched and Do Not Disturb mode is enabled. Picking up the phone back from the surface will automatically disable DND mode. Cool! Isn’t it?

I successfully enabled the feature on my Pixel 2 XL running Pie. Below is also a video that demonstrates the complete procedure, courtesy of the Tasker developer himself.

So, you have just been able to get Google Pixel 3 Flip to Shhh feature on your Android device without Android Pie or Digital Wellbeing. Our appreciations go to João Dias for creating the Tasker profile for everyone else to use it. Enjoy the new feature now!