OnePlus phones have long been one of the most developer-friendly. Ever since the OnePlus One, it was quite easy to unlock the bootloader on every OnePlus device. It could be easily done using a mere fastboot command. But now, OnePlus has an unlock form, as a requirement to unlock the bootloader on their phones. This might have something to do with the upcoming OnePlus 6T, that will allegedly be sold by T-Mobile too.

Unlocking the bootloader has always been easy as a pie for OnePlus users. One could simply use the ‘fastboot oem unlock‘ command and enjoy an unlocked bootloader within seconds. There are various manufacturers like Motorola, Sony, HTC, etc who use some sort of unlock form or a special unlock code for unlocking the bootloader. These only make things difficult for users who’d like to go beyond the manufacturer’s OS and opt for custom ROMs.

The official OnePlus unlock page went live and was first pointed by AndroidPolice. You can visit the unlock page here (You will first need to log in using your OnePlus account). According to the page, the user will be required to fill in the phone’s IMEI, an email address where he/she would like to receive the confirmation, and a device-specific unlock code. After successfully entering the required details, the user shall be notified within 1-to-2 weeks with the confirmation. 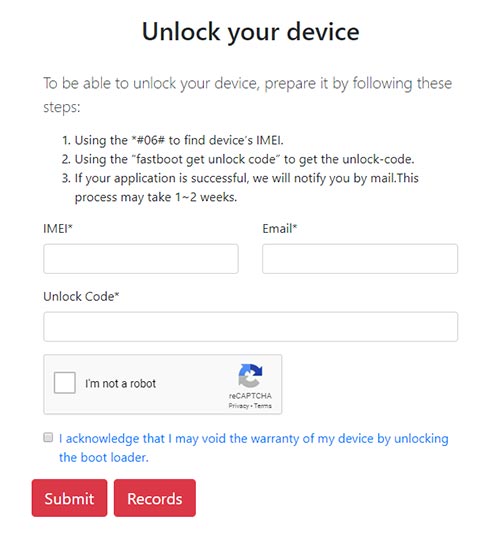 If you have a closer look at the OnePlus Unlock Form, you shall see a checkbox at the end, stating – “I acknowledge that I may void the warranty of my device by unlocking the bootloader“. Up until now, the manufacturer has stayed pretty warmed up with users who unlocked their phone’s bootloader or rooted it. Doing so, wouldn’t have affected the phone’s official support/warranty period, until and unless a damage was caused due to the modification(s).

But is that about to change? Our best guess is – No. We think the possibility that the OnePlus 6T will also be sold as a carrier-branded model by T-Mobile, has some involvement in this. We believe that the regular 6T variant will still be bootloader unlockable without the form. And that sold from the T-Mobile will force the users to go through these extra steps and patiently wait for the mentioned time before they can unlock the bootloader.

Also, we personally do not think that this would change the old and easy way to unlock the bootloader on older devices such as the OnePlus One, Two, X, 3/3T, 5/5T, and 6. Older users would probably not need to go through these additional steps and a long wait time before they can unlock the bootloader, but that’s just what we wish. Nothing is sure yet since we still don’t have an official word from OnePlus about this. We might just have to wait until 30th October, when the 6T will be officially launched.

What do you think about this?