Google Phone v17 now supports an in-call Floating Bubble feature for extended controls and better multi-tasking while on a call.

Over the past year, Google has fine-tuned and added many features to its own dialer app – ‘Phone’. The app itself is based on the AOSP dialer, but with a series of added features including Caller ID, number blocking, assisted dialing, spam recognition, nearby suggestions and what not. The developers over at Google have been internally testing a new in-call bubble for its dialer application. Yes, it’s probably something like Facebook’s chat head, but yet more functional for any smartphone user.

Today, out of nowhere, Google dropped in an update and pushed Google Phone v17 to the Play Store. It was surprising to see that the new update also brings the Floating Bubble functionality to the devices. The feature was initially reported back in August, last year by 9to5Google. At that moment, there was no confirmation on when the new feature will be publicly available. Traces of the feature were also found in Google Phone v12. Over the months, the bubble feature has been improved in terms of the UI. The app, however, can only be accessed by Google devices including the Nexus and Pixel phones. Before you download Google Phone v17, let us take a quick peek at the changes and options that it offers.

To engage the feature, all you have to do is press the Home button during an ongoing call. The floating bubble should automatically appear on the screen. You can easily move it to another location on the screen for non-intrusive multi-tasking. As soon as you start dragging the bubble, you shall see options to hide the bubble or end the call. So you may just drag the chat-head to the desired option. 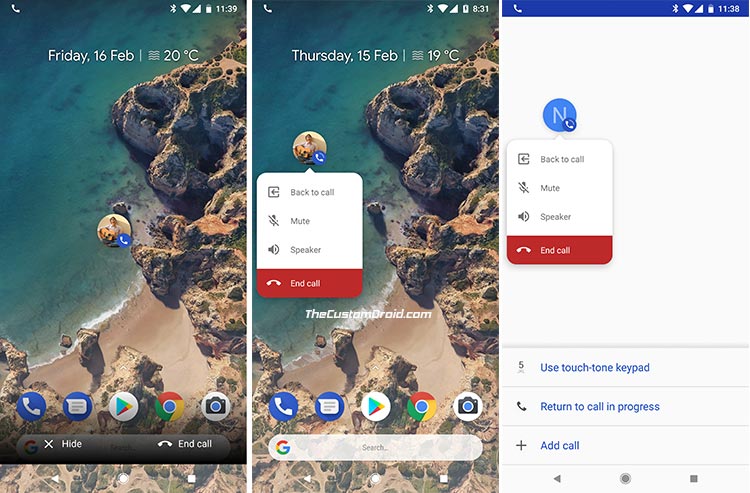 The chat head displays the avatar of the contact image. Tapping on it will horizontally expand a drop-down menu with in-call controls. You will have options to mute the call, switch between the speaker/handset mode, go back to the on-going call, or hangup.

According to AndroidPolice’s APK teardown, the new feature was found in v17.0.184919600. We previously guided you on how to force enable Floating Bubble on Google Phone App. That was achieved by modifying a boolean value in the app preferences. The process itself was limited to those having root.

Get Phone on Google Play

Users can now easily get this feature without modifying their device internally. All you have to do is install Google Phone v17 on your phone. The app is available on Google Play, so just click on the download button and update it. If the newer version of the app is not yet reflecting in your region, you can download the APK from APKMirror.

There is no dedicated setting to enable/disable the feature manually. But if you’d really like to get rid of it, go to Settings and disable “Display over other apps” permission for Phone. It is good to see that Google is finally adding cool and functional features like this in their apps. We’d love to know your opinion on the same, so drop a comment below.