Google Pixel 5 and Pixel 4a (5G) recently got a new Adaptive Sound feature that tweaks and improves the phone’s audio quality based on the surroundings. In this tutorial, I will show you how to enable Pixel 5’s Adaptive Sound feature on older Pixel phones. These include the Pixel 4/XL, Pixel 4a, Pixel 3a, and Pixel 3/XL. This new feature can be enabled on both rooted or unrooted phones using a Magisk module or ADB commands, respectively.

Back in December 2019, Google announced the concept of ‘Pixel Feature Drop’, wherein the company’s own Pixel lineup gets major updates in terms of new features. Google updates the users about these feature drops over the official Pixel Google Blog.

That being said, the fifth and latest Pixel Feature Drop was released in December 2020. This brought a lot of exciting new features like Hold for Me, Extreme Battery Saver, the ability to export Now Playing playlist, and more to all support Pixel devices.

Included with these were certain features that were exclusive to the newer Pixel 5 and Pixel 4a (5G) devices. The one that we are here for is the Adaptive Sound feature. According to Google, this feature “improves the sound quality of your phone speaker based on your surroundings. It uses the microphone to assess the acoustics near you, then adjusts the sound equalizer settings in certain apps.“.

Although the feature isn’t the “must-have” kind, it would be good to have it on your Pixel phone. And that’s what this tutorial is about. Below, you will find the instructions to enable the Adaptive Sound feature on older Pixel devices, with or without root.

The credits go to XDA Recognized Developer Freak07 who posted about this method on the XDA forums. Make sure to visit the thread and give him a thumbs up!

How to enable Adaptive Sound on older Pixel phones with Root

If your Pixel phone is rooted, then enabling the Pixel 5’s Adaptive Sound feature is as simple as installing a Magisk module.

The Device Personalization Services app installed on older Pixel phones does not include the Adaptive Sound feature. Thus, you will need to install the one that’s meant for the Pixel 5. So, begin by downloading Pixel 5’s Device Personalization Services app to your device from APKMirror. Then launch the file manager app and install the APK on your device (Info: How to Install an APK).

Next, download the Adaptive Sound Enabler Magisk module (Adaptive_Audio_Settings_Enabler.zip) on your device. Then, open the Magisk Manager app and go to the ‘Modules‘ section by pressing the icon on the extreme right of the navbar. 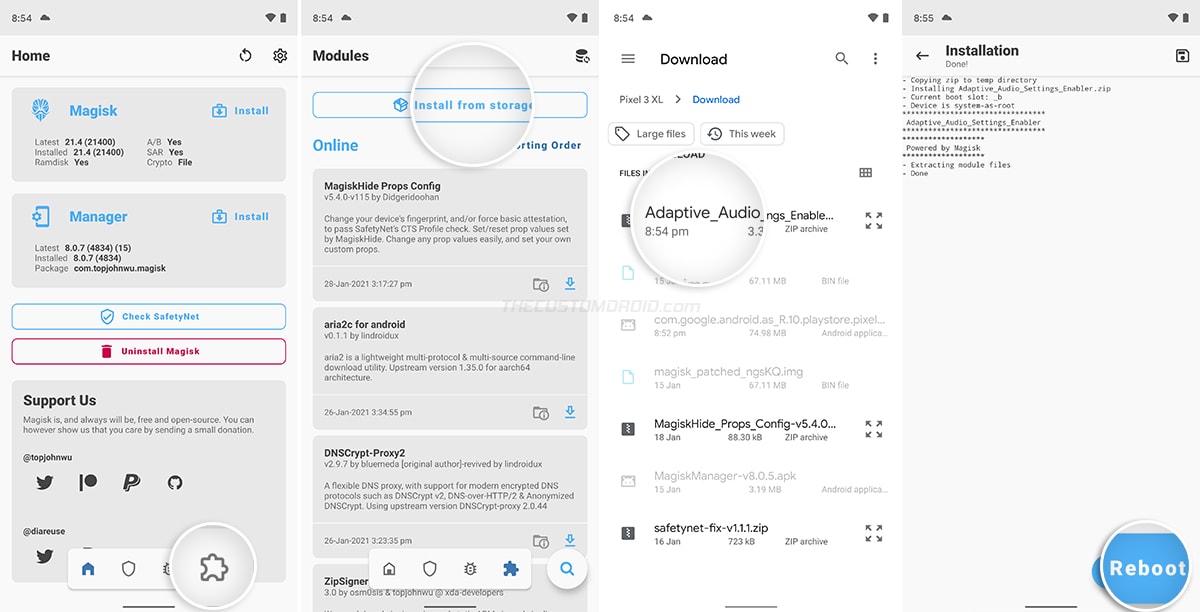 Select ‘Install from Storage‘ and navigate to the location where the module was downloaded. Tap on the module’s ZIP file and wait for the module installation to finish. Finally, press the ‘Reboot‘ button on the bottom-right of the screen.

The module works in an install-and-forget manner, so you don’t need to configure anything. Once your Pixel boots, navigate to ‘Settings’ > ‘Sound and vibration’ > ‘Adaptive Sound’ and turn ON the feature.

Note: You might have to wait for a few minutes after your phone restarts before the settings for this feature are visible.

How to enable Adaptive Sound on older Pixel phones without Root

It is also possible to enable Pixel 5’s Adaptive Sound feature on Pixel devices without Root by using a bunch of ADB commands. All you will need is your computer, a USB-C cable, some basic knowledge of using command-line, and your Pixel phone, of course.

The only downside of this method is that the feature will be disabled once the phone is rebooted. In which case, you will need to re-execute the mentioned command to enable back the feature.

After executing the commands, close the command-line window and disconnect the phone. Then go to ‘Settings’ > ‘Sound and vibration’ > ‘Adaptive Sound’ and turn on the toggle.

That’s it! You have just learned how to enable Pixel 5’s Adaptive Sound feature on older Pixel phones with and without root.

It’s hard to tell why exactly Google decided to force the older Pixel phones into the back row and made the feature exclusive to only the newer phones. If the feature uses on-device microphones to analyze the sound and the software to assess it, then it makes little sense to not have it enabled for older Pixel phones that are supported (I may be wrong).

Anyways, now that you can enable Adaptive Sound, go ahead and try it out. Let me know if turning on the feature makes any significant difference to audio quality when your surroundings change.