Through this post, you can download DarQ, which is an Android app that allows users to enable Dark Mode for individual apps without root. In this guide, we will show you how to enable per-app Dark Mode on Android 10 devices using “DarQ“.

Android 10 was launched back in September 2019 and it came with a heap of new features like Smart Reply, improved Gesture Navigation, Live Captions, Privacy & Location Controls, and much more. And among those, was a feature that was most anticipated and that is Android 10’s system-wide Dark Mode. It took quite a while for Google to realize the importance of dark themes in Android. It not only makes it easier for users to view their phone’s screen at night or in low lit environments but also helps save a bit of battery, especially on phones with OLED displays.

When enabled, the Dark Mode feature shifts the complete UI from light to dark colors. Not only does the system UI turns dark, but the UI of the installed apps too. Google made sure that all its apps would support the system-wide dark theme, even before the release of Android 10. When it comes down to third-party apps, developers can add support for Dark Theme, either by implementing their own style or by forcing it and letting Android do it for them.

Developer Options in Android 10’s settings do offer an option to force-enable Dark Mode on apps that don’t support it specifically. But there’s still no option to turn on the dark theme in third-party apps individually. 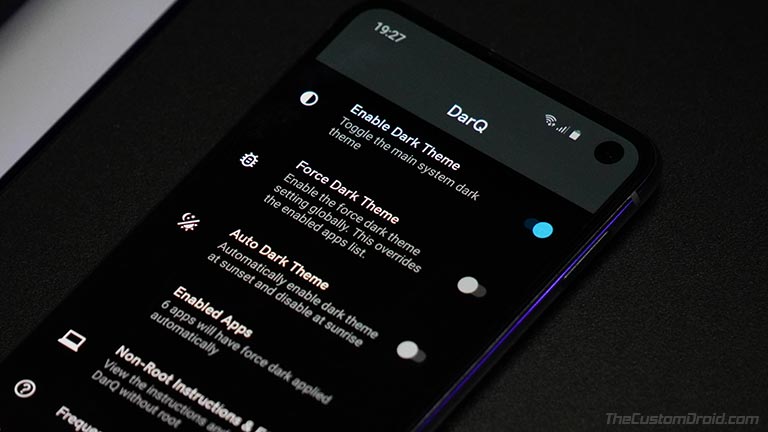 DarQ is an Android app developer by XDA Recognized Developer Quinny899 (Kieron Quinn), that allows users to enable per-app Dark Mode in apps that don’t support the feature (yet). Not just that, it also allows you to automatically schedule light and dark themes on sunrise and sunset. The app isn’t exactly new, it was first released even before the stable Android 10 update was announced.

But up until now, the app required a rooted Android phone to do this. The good news is, the developer has recently released v1.2 of the DarQ application that now allows users to enable Per-App Dark Mode on Android 10 without root. I have already tried it on my Google Pixel 3 XL and Samsung Galaxy S10e running Android 10, and it works flawlessly.

That’s not it, the new version of the app also adds support for OnePlus devices running OxygenOS and brings some new features for maximum accessibility. For starter, the app’s interface now has a search bar in the apps list, so that you can easily find your favorite apps and turn on Dark Mode for them, instead of scrolling through the list indefinitely. Also, the app now has a filter to show system apps, which is hidden by default.

Below is the full changelog as provided by the developer on the original XDA thread:

Unlike many other root apps, DarQ isn’t available on the Play Store. It can be downloaded either via the XDA Labs download page or through APKMirror, both of which are pretty trustable sources.

How to Enable Per-App Dark Mode on Android 10?

Using DarQ is the easiest on rooted devices and requires just a few steps. But to enable Per-App Dark Mode on unrooted Android 10 devices, you’d need to do some extra work. According to the developer, you will need to use the provided ADB script to run the required background service for the app to work. It’s quite easy actually.

That’s it! Your selected apps should now have forced dark theme, even if it doesn’t support it yet. Below are screenshots for a few apps that don’t support a dark theme yet, but it has been enabled via DarQ. Cool! Right? 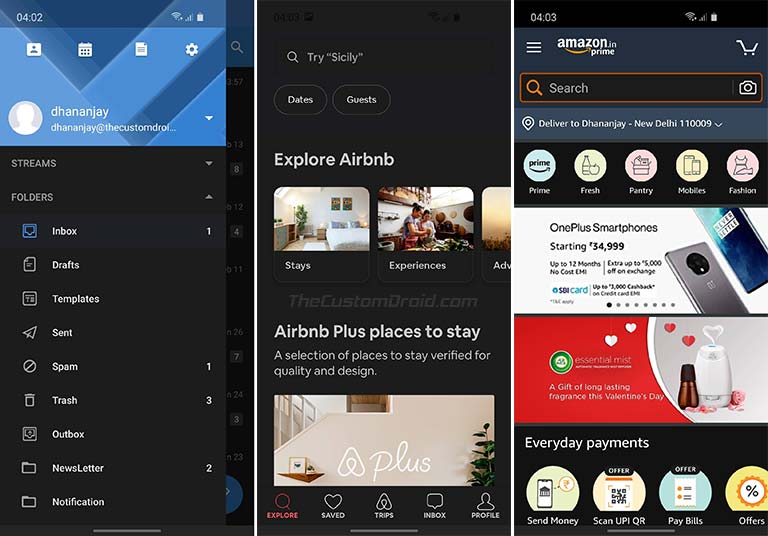 Note: You do not need to keep your device connected to the PC for DarQ to run, but only until you reboot the device. That’s because when the device is rebooted, the background service required will also be killed. So, to use DarQ on unrooted devices, you will need to run it every time your reboot/restart your phone.

We’d like to thank Quinny899 for developing such a useful app, and even more for making it work on unrooted devices. It’s a great treat! So, this was our guide on how to enable per-app Dark Mode on Android 10 devices without root. What do you think about it? It’s pretty cool, right?