If your device is running Android 10, you probably don’t need to download and install a third-party app to record your phone’s screen anymore. Google’s Android 11 Developer Preview comes with an in-built screen recorder. Apparently, Android 10 has this feature too. In this guide, you will learn how to enable Android 11’s Native Screen Recording in Android 10 without root.

Note: This feature is currently experimental and has bugs in Android 10. If you own a Pixel device, you can install Android 11 Dev Preview, wherein the feature works fully.

When the first beta version of Android Q was released last year, it was discovered that it had a hidden screen recording feature. The feature, at that time, could easily be enabled using the ‘settings_screenrecord_long_press‘ feature flag in Android 10’s Developer Options. Online publishers like GadgetHacks, along with many others also covered a tutorial on how to enable it.

However, it was later removed in the following beta updates and never made it to the stable Android 10 update either. It clearly indicated that Google had planned on including this feature in the next major Android version, that is Android 11 (R). As it turns out to be true, Google just pushed the first developer preview of Android 11 and it comes with the screen recording feature built right into the system.

Also read: How to Enable Per-App Dark Mode on Android 10 without Root 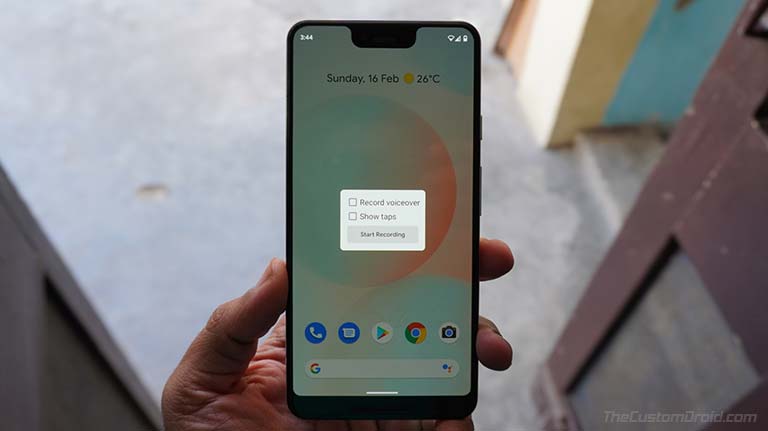 Redditor u/Xenofastiq found that the built-in screen recording feature started working again on his Pixel 2 unit running Android 10 software with January 2020 security update. But unlike before, this couldn’t be enabled using the flag in the device’s developer option. Another Redditor u/Hung_L shared an ADB shell command that could easily the feature.

So, you can now enable Android 11’s screen recording feature in Android 10 using ADB and without rooting your device. We have already tested the method on our Pixel 3 XL and can confirm that it works and enables the feature flawlessly. It should probably also work on other Android 10 devices too, like the Pixel 4 and Essential PH-1.

Before you proceed with the instructions, make sure that you have installed and set up ADB on your PC and enabled USB debugging on your Android 10 device.

Important Note: The fact that the feature still remains hidden, means that it is not fully ready for an average user, and contain bugs. If you’re really interested in trying it out, then sure, just go ahead and follow the instructions. It’s not like it’s going to do any harm.

The only requirement to enable Android 11’s native screen recording is that your phone should be running the Android 10-based January 2020 security update or later.

The ADB shell command mentioned above basically turns on the hidden flag in the device settings. The same flag that was discovered in the early Android Q beta.

Once enabled, the feature will stay on even through reboots, unless you factory reset your device or flash the stock firmware on it.

How to Record Screen in Android 10

Now that you have enabled the feature on your Android 10 device, you can start using it to record your phone’s screen.

The option has been hidden right on your device’s Power Menu. So, just long-press the power button until the Power Menu appears on the screen. You should see the Power, Reboot, Screenshot, and Emergency options. Simply long-press on the ‘Screenshot’ button until a new window pops up. 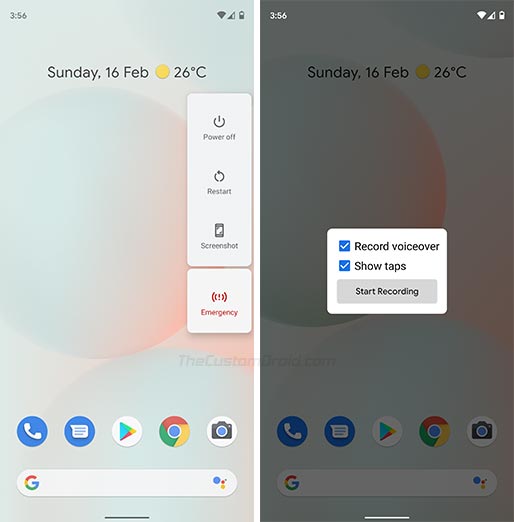 The Android 10 screen recorder offers two options – (1) To record voice using the device’s microphone, and (2) show taps when recording the screen. Now press the ‘Start Recording button’. As soon as you press it, you should see a precautionary warning on the screen about how you may expose sensitive information during the recording process. If you feel comfortable and sure, just tap the ‘Start Now’ button to finally start recording your device’s screen. 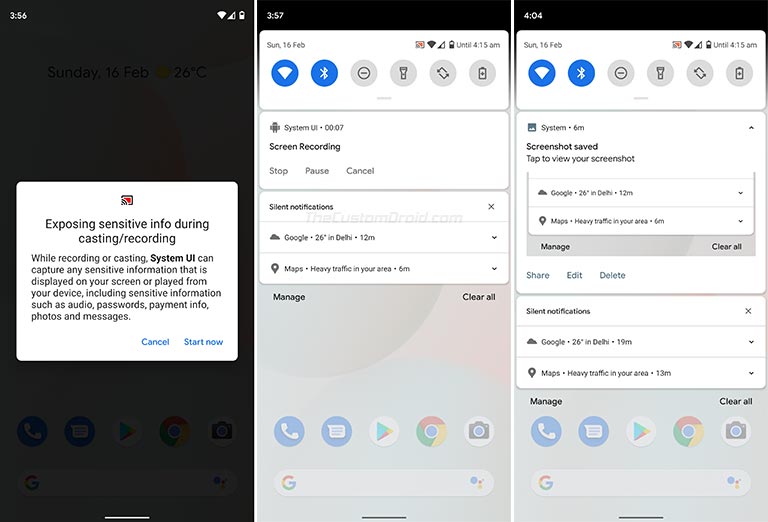 Pull down the notification tray and tap on ‘Stop’ after recording. The system will process the recorded screen video. You can then share it using the ‘Share’ button.

Like we mentioned earlier, the feature isn’t fully ready to make its way to the settings. In our period of testing, we found out that only the top half of our device’s screen was recorded. We aren’t alone, several other users have reported the same on Reddit. While there were others who didn’t face this issue. So, be prepared and good luck!

The feature is surely very useful in different scenarios. It took Google quite some time to realize and accommodate it.

So, this was our guide on how to enable Android 11 screen recording feature in Android 10. If you have any questions regarding the method and instructions shared here, please leave a comment. Also, do let us know if you didn’t face the aforementioned bug and were able to record the whole device screen.