Android’s open-source nature makes it versatile and easily customizable too. For those who just got into the Android modding/customization scene would surely be well-aware of Magisk. Apart from being a powerful tool to root Android devices, it also allows users to customize their phone’s software using ‘Modules’. And all without touching the system partition and passing Google’s SafetyNet checks too.

Well, before Magisk even existed, the Xposed Framework was a tool that every Android modder had in his/her arsenal. Xposed is developed by XDA Recognized Developer rovo89 and is a framework for modules that can customize the software of Android devices without touching any APKs. Unlike customizations offered by custom ROMs, Xposed allows users to easily undo the changes by disabling/removing the modules. Which makes it quite great!

The huge collection of Xposed Modules allows users to customize almost every bit of their phone’s software, irrespective of the device’s OEM or the installed Android version. But unlike Magisk, Xposed applies customizations directly to the system partition, making it its own downside now, since Magisk does the same systemless-ly.

Current Status of Xposed; and Introduction of EdXposed Framework

The last official version [v90] of Xposed was made for Android Oreo. Although in the beta stage, it still was quite as stable. Since then, Android Pie was released in 2018 and Android 10 in 2019, but the developer (rovo89) has yet to update us on the current development status of official Xposed for these newer Android versions.

Since Xposed is open-source, a team of developers (solohsu and Jim Wu) carried over the unofficial development of Xposed for newer Android versions. The project is known as the ‘EdXposed Framework‘ and uses the Riru module (by Rikka Apps) to inject code into Android’s Zygote process. This combination of EdXposed and Riru modules allows users to install Xposed Framework on devices running Android 10, Pie, and Oreo.

Now, without any further ado, let’s get to the instructions! 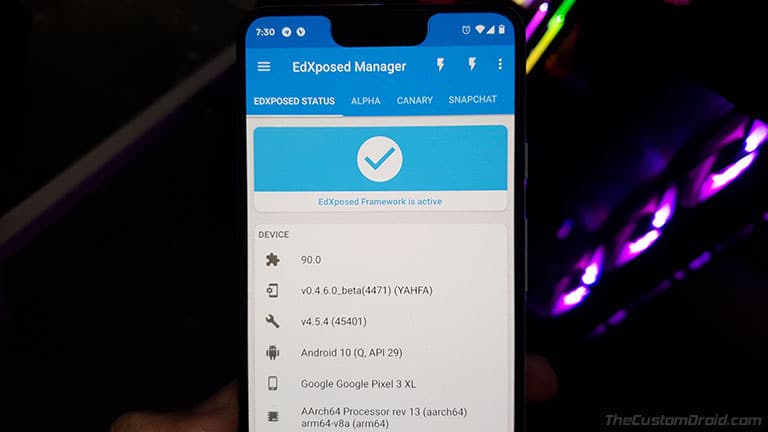 How to Install Xposed (EdXposed) Framework on Android 10 or Below

In brief, you will have to start by downloading and installing the ‘Riru – Core‘ and ‘Riru – EdXposed‘ Magisk modules on your Android device. Once that is done, you can simply install the EdXposed Manager application to install, uninstall, and manage Xposed modules on your device.

I have split the instructions into three major steps for your better understanding. Make sure that you follow all the steps in the given order and do not skip any part of the instructions.

The first step is to download and install the ‘Riru – Core’ module on your device. This module can be installed directly from the Magisk Manager app. Just follow the instructions below.

. As of 29th February 2020, the latest version of the Riru-EdXposed module (v0.4.6.1) can be installed directly from Magisk Manager. The instructions have been updated.

Magisk Manager will now install the module. Once the installation finishes, press the ‘Reboot’ button on the bottom-right to restart your device.

Note: If you face problems like random reboots, non-working modules, or any other sort of unusual behavior after finishing all the steps, then try using the alternate version of the Riru-EdXposed module. For instance, if you installed the YAHFA version, then uninstall that and try the SandHook version, and vice-versa.

At this point, Xposed Framework has been successfully installed your device running Android 10 or below. Now, the final step to download and install the ‘EdXposed Manager‘ companion app. It will be used to manage Xposed modules, and will also verify if the framework was properly installed and is currently active.

Simply click the link below to download the latest version of the EdXposed Manager app, available as an APK file.

If you have downloaded the APK on the PC, transfer it to your phone’s storage. Then, open a file manager of your choice and navigate to the location where the file was transferred/downloaded. Simply tap on the APK file to begin the installation process. 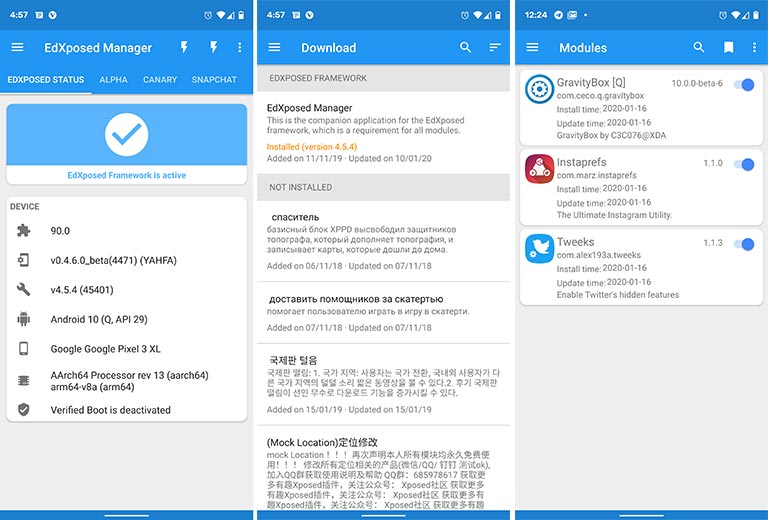 Once installed, go to the app drawer and launch the application. The status card should show the “EdXposed Framework is active” message along with other relevant information about your phone. You can tap the menu icon and go to the ‘Download’ section to download Xposed Modules of your choice. To manage the installed modules, simply go to the ‘Modules’ section of the app.

That’s it! You have just been able to install Xposed Framework on Android 10, Pie, or Oreo.

Now that you have the framework installed, check the list of Xposed Modules that support Android 10 and work with the EdXposed Framework.

Note: If any of the below-listed modules cause a bootloop on your phone, you can easily use TWRP to disable/remove EdXposed module to boot your device.

There you go, this was our guide on how to install Xposed Framework on Android 10, Android 9 Pie, or Android 8.0/8.1 Oreo devices, using EdXposed. With the growing list of supported Xposed Modules available, you can now easily customize your phone’s software.

For some time, I thought that Xposed will no longer support the latest Android versions, and be forgotten soon. It’s quite nice to see the development being picked up and carried on voluntarily by other enthusiastic developers! So, a huge thanks to them.

If you face any issues while installing EdXposed using the instructions provided in this post, please feel free to comment below.