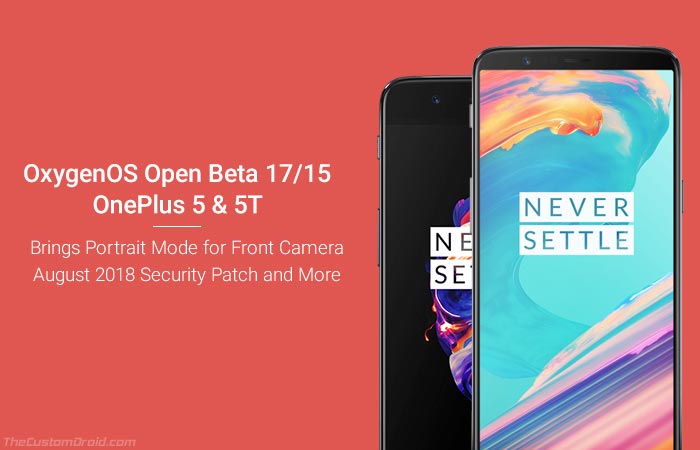 OnePlus is currently rolling out its latest iteration of the Oxygen OS Open Beta software for OnePlus 5 and 5T. Though the OEM has its all-new and super efficient Oneplus 6, it has not given up on its older flagship duo – OnePlus 5 and 5T. Both the older devices are duly getting their fair share of big and small updates. Speaking of which the current OnePlus 5/5T Open Beta 17/15 brings a massive changelog for both the devices. These devices are now getting Portrait Mode for the front camera and the latest August 2018 Android security patch.

The huge upgrade also brings optimization for the background power consumption, fixes up the call recording issue in India. It also adds the Toast message source for Toast messages that are sent by the background apps. Again to inform the users, it adds a description about sleep standby optimization when it is turned on for the first time. Besides, an all-new Oxygen OS UI comes packed in the latest Open beta update from OnePlus. The Switch App is also getting an interface optimization.

As told before, this release also brings the latest August 2018 security patches that fix several vulnerabilities in the Android framework and related components. For more info about the fixed vulnerabilities, visit the official bulletin. 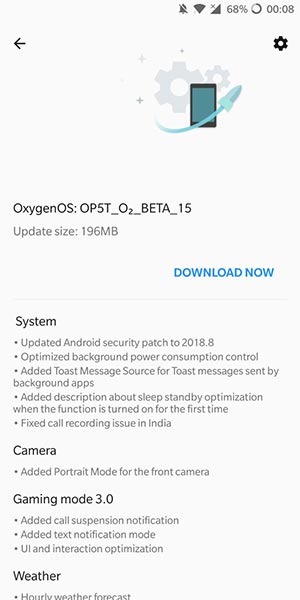 Following is the complete changelog as mentioned on the original release thread:

That’s quite a lot of new features and changes for an individual release. All these changes will further make their way to the stable OxygenOS software after thorough testing and feedback.

You can wait for the OTA to roll into your devices gradually. OTA business always takes place in a phase-wise manner. If waiting is not your game, then you can go to phone Settings -> Software Updates. Check for the latest software. If after manual searching it shows up, then download and install it. The latest OxygenOS beta update weighs around 196 MB, so we advise you to update over Wi-Fi to avoid any excessive data charges.

Alternatively, You can also manually download and flash the OnePlus 5/5T Open Beta 17/15. Download the latest Oxygen OS Open Beta from the official servers. So, do not miss this major update from OnePlus. Security, optimization, performance, gaming and everything else is getting an update in the latest Open Beta release. Make sure to catch the airborne update as it rolls, or manually flash the OTA.