Unlocking the bootloader is now possible for Nokia phones running Android. If you’re looking ahead to install ROMs, kernels, mods or root, then you must first unlock Nokia 8 bootloader using the official method.

Back in August, Nokia released a software update that blocked the only known bootloader unlock method. Although not all the phones were able to utilize the specific method, those which were capable were suddenly blocked from using it. The method involved using a software exploit to unlock the bootloader, and naturally, Nokia patched it.

To the passionate developer and modding community out there, we have news to share!

To start with, you can now unlock Nokia 8 bootloader by following the instructions provided in this post. But before you get to it, take a look at the information below and know the risk involved in unlocking the bootloader.

First and foremost, unlocking the bootloader will void your phone’s official warranty and support provided by HMD Global. On the official unlock page, Nokia also mentions that once a device is unlocked, it cannot be undone. So, if you’re planning to unlock, make sure to be very certain. Also, DRM-protected features and content will no longer work.

Neither we or HMD Global will be held responsible if your phone gets damaged during or after this process.

So, why is unlocking the bootloader so important? For instance, when the manufacturer chooses to drop software support for an older device, a user may opt for a custom ROM to revive his/her Nokia 8 with the latest OS updates. Not only that, but it also enables a user to gain root permissions for running root-enabled apps and using mods.

The process is pretty simple. You will need to start by validating your phone. Once validated, you will get access to download your device-specific ‘unlock.key’ file. And finally, you can flash the downloaded file and thus unlock Nokia 8 bootloader.

Unlocking will give you access to the device partitions and the ability to modify them. Which means you can then install a custom recovery like TWRP, root your Nokia 8 using Magisk, install mods like Dolby Atmos/ViPER4Android for enhanced audio, and more. 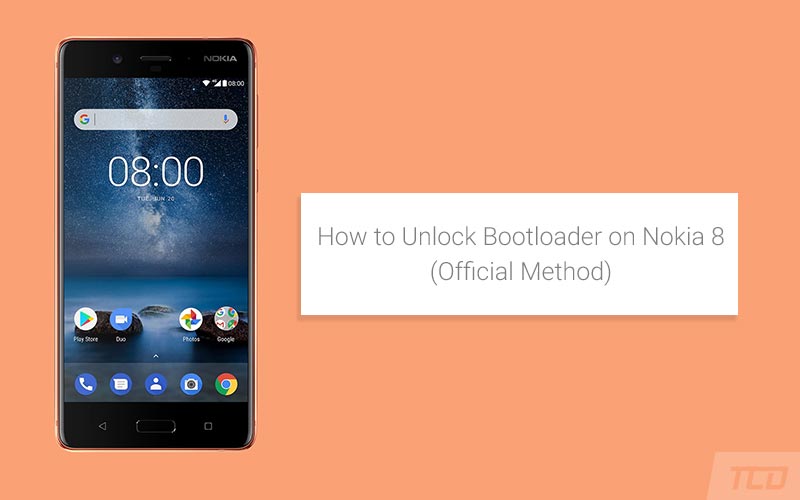 How to Unlock Nokia 8 Bootloader

As told earlier, this is a 2-step process. The first step is to validate your phone using the Bootloader Unlocker app. Once done, you will need to download your device-specific ‘unlock.key’ file. The second and final step is to flash the downloaded unlock key file using fastboot to unlock Nokia 8 bootloader.

When Step 1 is complete, you will receive an email containing your device-specific ‘unlock.key’ file on the registered email address.

Your Nokia 8 should now boot into the OS. As told earlier, all the apps and data on the phone should be wiped. So go ahead, set up the device by following the on-screen instructions and restore your backup. You can now go ahead and install TWRP on your phone and further use it to root, or install mods for additional features.

For now, it seems like that Nokia 8 is the only supported device for bootloader unlocking via this method. We believe that more devices will be added soon to the list.

So, this was our tutorial on how to unlock Nokia 8 bootloader using the official method. If you have any questions, please ask us by commenting below.