Through this page, you can download the latest official TWRP 3.4 recovery for all officially supported Android devices. Further, you can follow the provided instructions and learn how to install the latest TWRP on any Android device using fastboot or Odin.

For those who are new to modding, TWRP (Short for “Team Win Recovery Project”) is an open-source custom recovery that allows Android users to install third-party firmware like custom ROMs, kernels, or mods and root their devices. Further, it also facilitates taking full system backups, formatting/erasing device partitions, and do much more.

Since the release of TWRP 3.3 a year ago we have observed some of the most drastic changes in the Android ecosystem. From the new System-as-Root implementations to dynamic partitioning system in Android 10, a lot of these changes have posed new problems in TWRP development and real-time usage.

TWRP 3.4 is possibly one of the biggest updates to the custom recovery considering the large variety of changes it brings. So before you head over to download links and installation instructions, let us discuss these first.

If you’re interested, you can find the complete changelog of this latest version on the official website. You’d observe that the list of changes, new features, and bug fixes is quite stretched. And a lot of these wouldn’t make sense if you’re not a developer.

But there are a handful of major changes in TWRP 3.4 that you should know of as an average user. These are as follows.

Apart from the ones mentioned above, there are several fixes and changes concerning the decryption, and much more.

What about support for devices running Android 10?

Earlier last year, the team’s lead developer dees_troy published a post to give the users an update about TWRP and Android 10 support. Some users might ask that there are several devices running Android 10 and already have a fully-working TWRP.

Well, it’s not exactly Android 10 that poses the problem, but the new changes that are introduced with it, which are applicable to devices that ship with Android 10 as their original version. This includes phones like the Pixel 3, Pixel 4, and future devices that will come with Android 10 out-of-the-box.

The most notable change, and the one that poses the biggest problem with TWRP development is the new dynamic/logical partitioning system. Android 10 devices now use a super partition, instead of dedicated partitions like system, vendor, etc. This in turns make it really hard for TWRP to mount the system partition. Which makes it extremely hard to flash ZIP files like ROMs, GApps, etc since the /system is read-only and couldn’t be mounted easily.

The developers are constantly working to find a proper solution for implementing TWRP to handle the super partition. However, the ETA is yet unknown. But what we do know for now is that TWRP 3.4 doesn’t support devices with the dynamic partitioning system, at least not yet. At the same time, it is also worth noting that other non-Pixel devices shipped with an older Android version (Android Pie, Oreo, etc) and received upgrades to Android 10 are not affected by this.

Considering the amount of dedication the developers have put into it, we are quite certain that they will surely find a way to get TWRP to support the dynamic partition system at some point in the future. It’s quite similar to the challenge the developers faced back when the A/B partition scheme was introduced with the original Google Pixel devices back in 2016.

Related Article: How to take a NANDroid backup of your phone via ADB

Below, you will find the links to download the latest TWRP 3.4 recovery image for all supported Android devices, along with the Installer ZIP files for devices that support the A/B partition scheme.

There are 400+ officially supported devices from different OEMs (manufactures) including but not limited to Asus, Google, HTC, Huawei, LG, Motorola, Oppo, OnePlus, Realme, Samsung, and Xiaomi. However, the latest TWRP 3.4.0-0 builds could take some time before they are released for each and every device.

Since the list is very long, you can use Ctrl + F in your browser and search for your device name, model, or codename.

How to Install TWRP 3.4 Recovery?

Installing TWRP is quite an easy task. But before you begin with the instructions, it is required to enable OEM Unlocking and unlock the bootloader of your Android device. That is because without an unlocked bootloader, flashing anything to your device, including TWRP would not be possible.

Further, you will also need to install your OEM’s USB drivers and set up Android SDK platform-tools on your PC. The platform-tools includes the Fastboot tool that you’ll be using to flash TWRP.

Once you have fulfilled these requirements, you can follow the instructions in the guide linked below to install TWRP 3.4.

How to Update to TWRP 3.4 from an Existing Version of TWRP?

In case you already have a previous version of the TWRP custom recovery installed on your device, you can easily update TWRP 3.4.0-0 or above through the recovery’s interface itself.

To do this, download the latest TWRP recovery image (.img) file for your Android device and transfer it to your phone’s internal/external storage. Once transferred, boot your device into TWRP recovery mode using the buttons sequence, or by issuing the “adb reboot recovery” command from your PC. 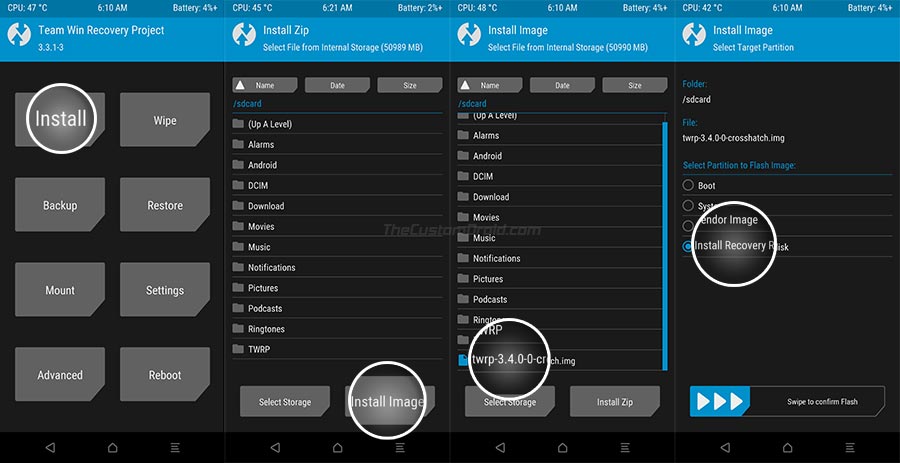 Now, tap on “Install” in TWRP’s main screen and press the “Install Image” button at the bottom-right of the screen. Then navigate to your device’s storage and select the TWRP 3.4 image file that you transferred earlier. As soon as you select the file, you’d be prompted to select the target partition, choose “Install Recovery Ramdisk” and swipe the button on the screen to flash the image file.

Once the file has been flashed, go to the “Reboot” menu of TWRP and press the “Recovery” button. This will reboot your Android device into the updated and latest version of TWRP recovery.

Now that you have the latest TWRP installed on your Android device, you can use it to flash custom ROMs like LineageOS or Paranoid Android. You can also install mods like Dolby Atmos Port or root your phone by flashing the Magisk zip.

There you go! You have just downloaded the latest TWRP 3.4 for your Android device and learned how to install/update it. If you have any problems regarding the installation process or the custom recovery itself, then please let us know.