Having an unlocked bootloader allows you to flash factory images/stock firmware, install a custom recovery like TWRP or flash a custom ROM like LineageOS. Not only that you could even root your device using Magisk and apply modifications to the software. In this guide, we will show you how to unlock bootloader using fastboot on various Android OEM devices in a step-by-step manner.

What is a Bootloader and Why Would You Need to Unlock it?

A bootloader is a software that runs every time the device starts up. It tells the phone what program it has to load to make your phone run. Not only that, but it is also used to boot up the device to recovery mode. All the devices nowadays are shipped with a locked bootloader. The reason is that the manufacturers only want their authorized operating system to run on the devices, thereby preventing the installation of third-party firmware/custom ROMs.

But many of the tech enthusiasts out there are always ready to tweak their Android device’s software for enhanced performance, battery life, features, etc. In spite of the risk involved in all these, they still want to go ahead and unlock their device bootloader. This is because it opens the gateway to tons of new features. The most important among them is the ability to obtain root access on your device, to make modifications to the software. Apart from that, you could also try out various MODs and frameworks, or capture much-improved pictures by installing different ports of Google Camera. 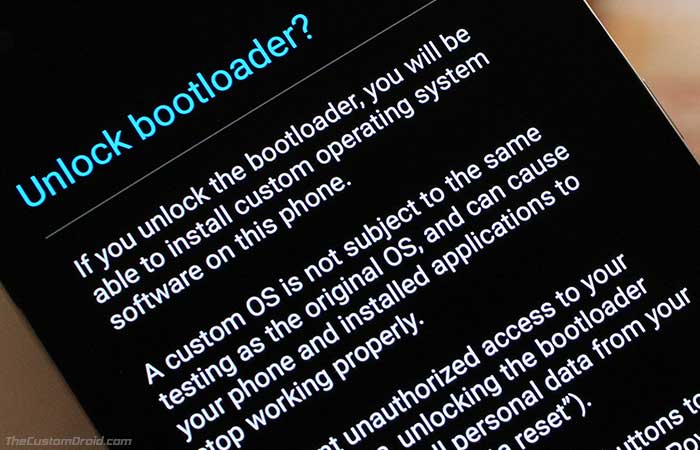 Unlocking the bootloader for most Android devices is a fairly easy process, for example, Google Nexus, Pixel, Essential Phone and OnePlus devices are easily unlockable. But not all Android devices follow this straightforward method. Other OEMs like Sony, HTC, Motorola or Nokia also allow their phones’ bootloader to be unlocked, but not directly. You’d need to get a device-specific unlock code/token from the manufacturer and then only you could carry on with the process.

Some devices and carriers don’t allow unlocking of their device’s bootloader in an official manner. In such cases, the user might have to wait until independent developers find an unofficial way (You can check for your device-specific section at XDA forums). In recent times, even Huawei has taken a rather strange route. They no longer provide the unlock-key for their devices launched after April 2018. As a result, users are left with no choice but to shell out extra money and purchase the code from third party websites- with no guarantee regarding the genuineness of such codes.

With all these pieces of information in hand, read on the below guide on how to Unlock Bootloader on Android Devices using Fastboot.

For your ease and understanding, we have split this guide into six steps.

The first step involves creating a backup of all your device data as they would be erased during the unlocking process. The second step will guide you to install the ADB and Fastboot (Android SDK Platform-Tools) on your PC. The third step talks about enabling USB Debugging and OEM Unlocking on your Android device. The fourth step is optional and only required in case of some OEM devices. In this step, you obtain an unlock-token from the device’s manufacturer. The fifth step is all about booting your device to bootloader/fastboot mode. Finally, the sixth step explains the procedure of unlocking the bootloader of your Android device using fastboot.

Step 1: Backup All Your Data

Unlocking the bootloader would completely wipe all the data from the device. So before beginning with the process, it is extremely important to have a complete backup of all your data- media files, contacts, call logs, app data, and other important data. Try to copy all the possible data to your PC/laptop.

Also, make sure to turn on the ‘Backup’ option under ‘Settings’ -> ‘System’ option. Upload your photos and videos to Google Photos. Also, make sure to keep all your app data synced with your Google ID. This could be done by turning on the sync feature present under ‘Settings’ -> ‘Accounts’. It is also advisable to remove your SD card before beginning with the process. If you want further help on this, refer to our detailed guide on how to make a complete backup of the data present on your Android devices.

In order to follow the instructions below, you must first install the Android SDK Platform-Tools on your PC. We already have a detailed tutorial on how to install them on Windows, macOS, or Linux. Alternatively, you can also use Minimal ADB and Fastboot Tool for this.

During this guide, we will refer to “C:\adb”, which would be the folder where the ADB and Fastboot tools are installed, if you’d have followed our tutorial. If the installation folder/directory is different in your case, then make sure to proceed accordingly.

Step 3: Enable USB Debugging and OEM Unlocking on Your Device

‘USB Debugging’ and ‘OEM Unlocking’ are two of the most widely used options we talk about while unlocking a bootloader or rooting an Android device. But what exactly are they and what role do they explicitly perform?

Whereas ‘OEM Unlocking’ is exclusively used for bootloader unlocking purposes. If you want to tweak with your device software, root your device or flash MODs then the first requirement is to have an unlocked bootloader. And this is where OEM Unlocking comes into play. Until and unless you enable this option, you won’t be able to carry on with the unlocking process.

Do note that both of these options (i.e. USB Debugging and OEM Unlocking) are present under Developer Options, which is hidden by default. So first you need to enable ‘Developer Options’ before enabling these two. Follow the below steps for the same:

You could also follow our separate guides on how to enable USB Debugging and OEM Unlocking.

Step 4: [If Applicable] Get an Unlock Key From Your Device Manufacturer

As mentioned before, not all devices’ bootloader could be unlocked directly via the fastboot. Some vendors like Sony, Motorola, HTC, Nokia, etc require you to get an unlock-token/key from them before you could proceed further.

So, below are the links to bootloader unlocking pages for various OEMs:

Once you have fetched the unlock key/code/token for your OEM Android device, follow the steps below to unlock the bootloader using fastboot.

Before entering the fastboot commands for unlocking the bootloader, you need to boot your device to bootloader/fastboot mode.

Different devices have different hardware key combinations for booting into bootloader mode. For example, OnePlus device requires you to press the Power and Volume Up button together for a few seconds whereas for Xiaomi devices it is Power and Volume Down. The hardware key combination for booting to fastboot for various Google Pixel/Nexus devices could be found on this page. 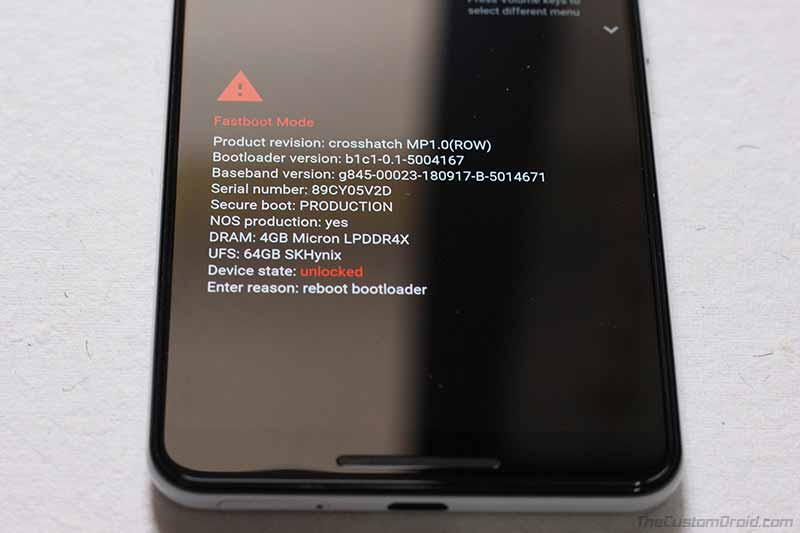 If you are unsure about your device, either Google it or follow the below procedure:

Your device will successfully boot into bootloader/fastboot mode. Now just follow the below steps in order to finally unlock your device’s bootloader.

That’s it. You have successfully unlocked the bootloader on your Android device. Note that when your device boots up for the first time, it might take up a little more time than usual. This is completely normal. Also, you will have to set up your device all over again as all the data on your device would have been wiped off.

With your bootloader unlocked, you could now install install a custom recovery like TWRP to flash custom ROMs/kernels, root your device via Magisk or even tweak your device software with the help of various mods like ViPER4Android.

Also, if you have any doubts with regards to unlocking the bootloader on your device, do ask in the comments section below.