Xiaomi is finally rolling out stable Android 10 for the Poco F1 (or rather known as ‘Pocofone F1) as MIUI 11. This new update comes with ‘V11.0.6.0.QEJMIXM’ build number and February 2020 security patch. Through this post, you can download the Poco F1 Android 10 OTA update and follow the provided instructions on how to manually install it using the in-built update mechanism or via TWRP recovery.

The Poco F1 came with Android 8.1 Oreo out-of-the-box when it was released back in 2018 and it was soon updated to Android Pie by the end of that year. However, with Android 10, which Google released in September 2019, Xiaomi seems to have slowed down a little.

The Chinese manufacturer originally started a limited rollout of Android 10 for the Poco F1 (with V11.0.4.0.QEJMIXM build number) back in January 2020, followed by a wider rollout in February. However, the update was soon halted due to a number of bugs that were discovered. The company stated that the rollout will resume once the said bugs have been addressed.

And it seems like the update has finally started rolling out over-the-air. The latest Android 10 update for Poco F1 comes as V11.0.6.0.QEJMIXM build number with MIUI 11 sitting atop. It is already being rolled out to the users who are running Android Pie on their phones, and also to those running the Android 10 firmware that was initially available in February. The OTA update weighs about 1.9 GB in size for the former, considering it’s a major Android version upgrade and just about 375 MB for the latter. 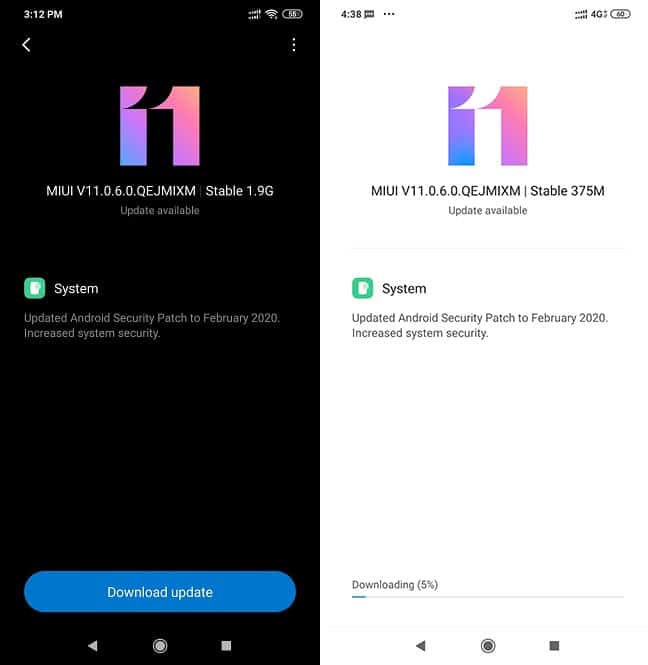 If you haven’t received the update notification, then you can go to ‘Settings’ > ‘About phone’ > ‘System update’ on your phone to manually check it. Since the rollout is staged, it may take some time before the update actually arrives on each and every Poco F1 unit. In this case, you might consider manually installing the Poco F1 Android 10 update. You can simply download the Android 10 OTA package from below and follow the instructions to install it and upgrade your phone right now.

But before you even get to the instructions, let’s take a quick walkaround of all the new features that this update brings.

Since Android 10 is a major version upgrade, you can definitely expect it to bring a lot of new features and enhancements over the previous version (Android Pie).

The first feature that I would like to highlight is Android 10’s system-wide dark mode. When turned on, the feature turns the complete system UI to dark black/grey colors. This not only makes it easy for you to view the phone’s screen in low-light situations but also helps curb a bit of battery usage. Since the dark mode is applied system-wide, it also extends to the apps’ UI as well.

Android 10 also has a major focus on users’ privacy and with that in mind, they have added a new privacy control system right into the device’s settings. Privacy Controls in Android 10 give you much granular control over the permissions required by the apps. The Location controls are more strict as well. You can optionally grant location permissions to individual apps only while you’re using them. This means the app won’t be able to access your location while it’s running in the background.

While the features mentioned above are more on the general side, there are some new bits and pieces which are specific to the Poco F1, and more precisely to MIUI 11. First off, the Poco Launcher in this update comes with some new transition animations while you open/close apps or switch between them. While it’s nothing huge, the new animations surely add up to the overall better user experience.

Secondly, the Game Turbo mode in Poco F1 has been revamped when it comes to the UI and also adds a few more features. And lastly, most of Xiaomi’s inbuilt applications in Poco F1, like Mi File Manager, Mi Share, Music app, Documents, etc have also been updated for Android 10.

As mentioned earlier, this latest update also comes with February 2020 security patch. Now, if you would like to upgrade right now, then you can download the Poco F1 Android 10 update from below and follow the instructions to install it manually. 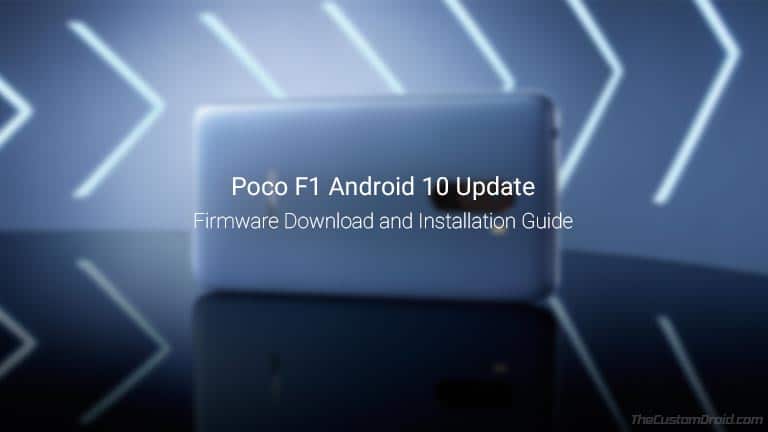 Make sure that you fulfill all the requirements listed below before you head to the download links and instructions.

The Android 10 update for Poco F1 is available as an OTA package. It can be easily installed either by using the in-built updater or via TWRP recovery. The package is available for both the Global Stable and Russia Stable channels. Make sure that you download the one that matches your device’s region.

As of now, the Android 10 Fastboot Image is not available. Once it is released, I will add it to the downloads section.

There are two different methods to manually install this update. The first method is for users whose Poco F1 is running the stock MIUI firmware without any modifications whatsoever. It involves installing the Android 10 OTA package using the in-built update mechanism.

On the other hand, the second method is for users who have TWRP installed on their Poco F1. This method involves flashing the OTA package via TWRP, followed by the Magisk and Forced-Encryption Disabler zip files to retain Magisk root after the update.

So depending upon your device’s current state, follow the corresponding method.

Your Poco F1 should now boot into the updated Android 10-based MIUI 11 OS and be rooted with Magisk at the same time. Quite easy, right?

Apparently, it seems like the first Android 10 update for a majority of Xiaomi devices has been recalled due to bugs, be it the Mi A2, Mi A3, or the Mi A2 Lite recently. Although the OEM did run a brief beta testing phase for the update first, it didn’t turn out to be as fruitful. Anyhow, the good part is that you can now enjoy Android 10 on your Poco F1. So go ahead and explore the OS for new features, try them, and let me know which ones do you like the most.

If you do face any bugs, please let me know via the comments so that others could know about it too. Also, don’t forget to share your feedback directly with Xiaomi, it will help them assess the issue.

So, this was our guide to download and manually install the Poco F1 Android 10 update. If you have any questions regarding the installation instructions or regarding this update in general, feel free to let us know.