After surrounding from several leaks and rumors, the long-awaited Xiaomi Poco F1 “Master of Speed” aka Pocophone F1 was officially announced at an event held in New Delhi, India. The Poco F1 is the most affordable phone to be powered by the Qualcomm Snapdragon 845 processor, with a reasonable starting price tag of INR 20,999 (~$300) only.

The Poco F1 is here to rule the mid-range smartphone market, delivering flagship standard specs at an unbeatable price tag. During the launch event today, Jay Mani (Head of Product, Poco Global) showcased the device and how it was carved out from scratch to take on the current flagship devices. According to him, the Performance, Camera, and Experience are three major factors that judge how you feel about a phone. 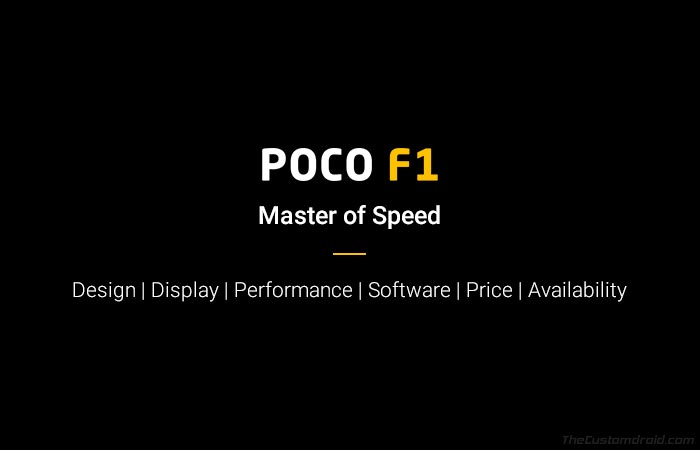 Here today, we will discuss everything that you should know about the Poco F1; the specifications, price, and availability. The factors below will act as a judge of how the Poco F1 will rule the current mid-range market and prove itself as a true flagship killer.

The new Poco F1 has an attractive appearance and a sturdy feel. During the event, Mr. Mani explained how almost every other smartphone user uses a case for their phone. So, if you’re applying a case of a smartphone with a beautiful glass back; you’re truly defeating the purpose of the whole design. The Poco F1 offers a polycarbonate body with a metal housing so that the device looks sturdy and feels great in the hands at the same time. 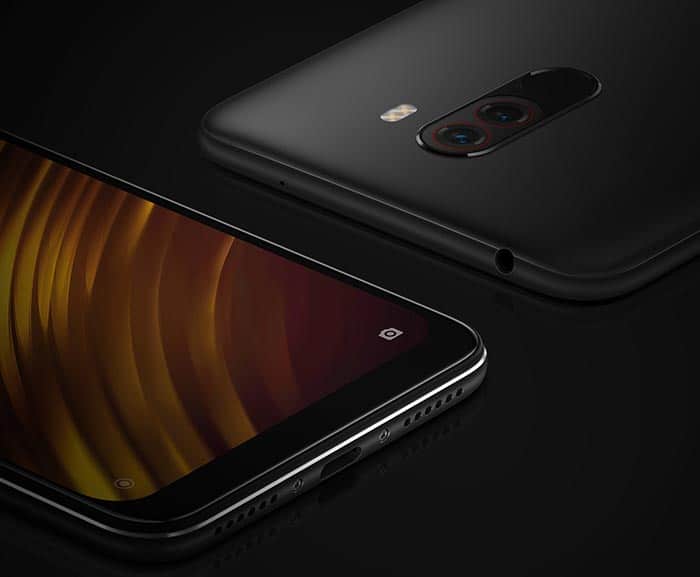 The front of the phone has a strong resemblance to the Xiaomi Mi 8, as it also carries a big notch and a short chin. On the bottom is a USB Type-C charging port and the camera lens is aligned vertically on the rear with the fingerprint sensor below them. The 3.5 mm headphones jack is placed on the top of the body.

To be truthful, while the design may not be a deal breaker, but Xiaomi has made up for it by focusing on the performance of the phone and thus – ‘Master of Speed‘.

The Poco F1 sports a large 6.18-inch FHD+ notched display, that has an aspect ratio of 19:9. It offers 500 nits of brightness and a contrast of 1500:1.  The notch at the top is slightly larger than one of the smartphones like OnePlus 6 and Zenfone 5Z. But that’s probably because it houses a lot of components – a 20MP front camera, Infrared lighting, Infrared sensor, proximity sensor, and an earpiece.

The display is aided by Gorilla Glass 3 for increased protection. The technology behind it is IPS LCD. While some might consider it as a downfall, but Xiaomi has done a remarkable job in manufacturing and it is capable of rendering a strong display experience.

In order to achieve fluid and sustainable peak performance, the Poco F1 is powered by the Qualcomm Snapdragon 845 SoC, as seen on most other OEM flagships, along with LiquidCool technology.

With such a powerful SoC, there’s always the good chance of heating and depreciating performance over longer usage times. So in order to maintain the temperature of the phone, Poco F1 is equipped with the ‘LiquidCool technology’, that would provide a more sustainable peak performance without any heating issues. The Poco F1 is built-in a copper heatsink over the top of the SoC that would distribute the heat evenly through the phone. As described by Xiaomi, the LiquidCool technology would increase the heat dissipation process by 300% faster than that of its competitors without it.

In addition, the phone is fueled by a massive 4000 mAh battery and supports Quick Charge 3.0. The processor is accompanied by 6GB/8GB of RAM with 64GB/128GB/256GB of UFS 2.1 storage. In addition, there’s also an ‘Armoured edition’ of the phone, that has a special Kevlar fiber back and packs 8GB RAM with 256GB inbuilt storage. The storage could be expanded up to 256 GB using a micro SD card. Although users may not actually need another 256 gigs of expandable storage, it could be worked out for transferring data with ease.

The Poco F1 comes with Android 8.1 Oro which is based on stock Xiaomi MIUI skin. The software experience designed for the Poco F1 is something special, as it is combined with Poco launcher. Just like the stock Android launcher, the Poco launcher is equipped with an app drawer that would let users find apps in a more convenient way. The company has also promised that Poco F1 will be updated to Android Pie in Q4 of 2018. 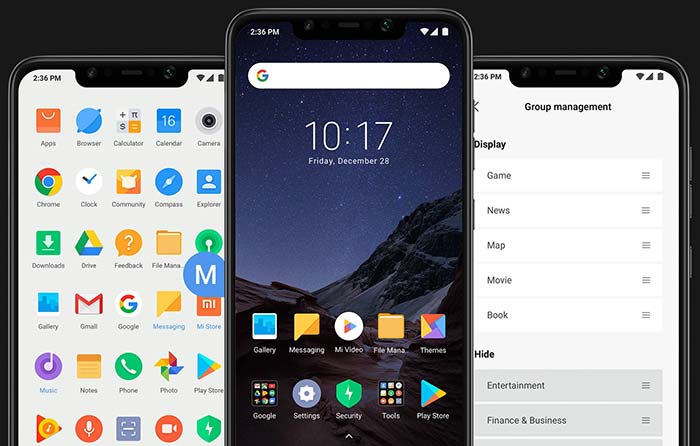 In case you don’t like a notch, the phone would also allow you to hide the notch using a simple toggle residing in the device settings. In addition, it is equipped with Infrared Face Unlock and would offer better facial recognition than other Android phones with software-based face unlock feature. Xiaomi demonstrated how the Poco F1 Infrared Face Unlock is capable of unlocking the phone in even dark environments and really low lighting.

According to Jay Mani’s statement, the kernel source code for the Poco F1 will be available on 29th August, at the official Xiaomi GitHub. Xiaomi has previously been attacked for not delivering kernel sources on time. Only this time, the manufacturer has made a prior promise for making it available at the earliest possible.

In photography department, the Poco F1 sports a dual camera setup. The primary camera sensor is Sony IMX363 with the pixel size of 1.4 microns, which is the same that Xiaomi has used in phones like the Mi 8 and Mi Mix 2S. The second sensor is a 5MP Samsung sensor for aiding better portrait mode pictures/bokeh effect. 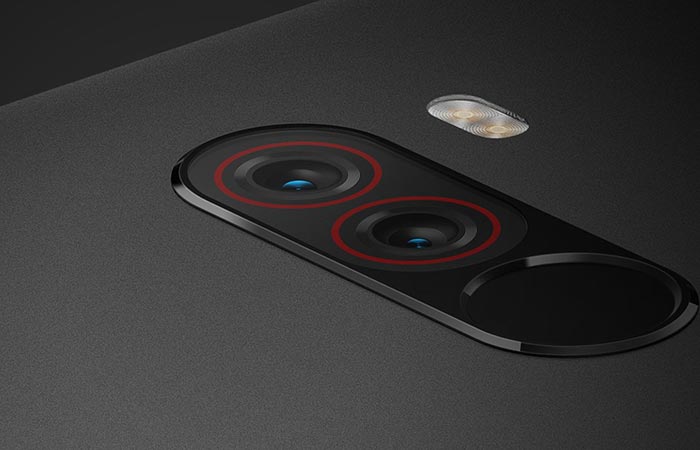 The rear camera is equipped with Dual Pixel Autofocus, the same that we have seen on Google Pixel 2 and Samsung Galaxy S9. In addition, it is also equipped with features like Real-time AI photography, AI backlit detection, Portrait mode and so on. The front camera is a 20MP sensor for selfies and comes equipped with the AI beautify feature.

The phone comes with three color options, Graphite Black, Steel Blue, Rosso Red. Furthermore, it has a premium ‘Armoured edition’. The smartphone will be available in India and should be up for sale exclusively via Flipkart, starting from 29th August 2018. 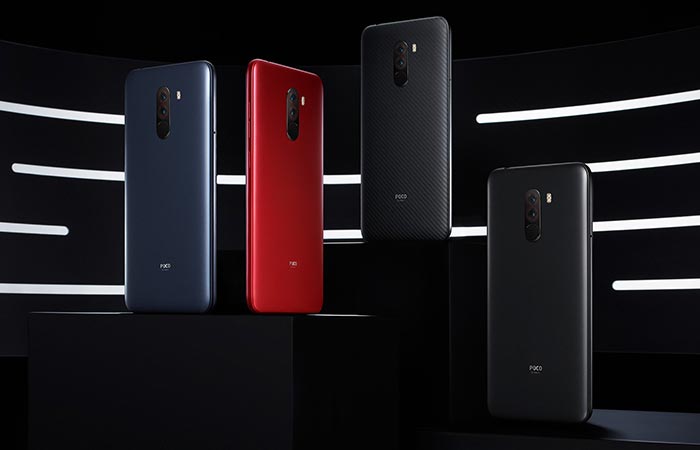 Xiaomi is already ruling the Indian smartphone market with devices like the Redmi Note 4 and Redmi Note 5 Pro with about millions of units sold already in the past 2 years. The manufacturer’s decision of building a phone from scratch while keeping the performance and speed in mind is definitely a good one.

So, should you buy the Poco F1 by Xiaomi? – Absolutely! The phone has everything you would expect from a standard flagship and is still tagged at a very affordable price. If you’re on a budget and are looking for intense performance, good battery life, excellent camera, and an overall better experience, then Xiaomi Poco F1 is the way to go.