Smartphones have seen a great deal of evolution over the past few years. This includes evolution in terms of both hardware and software. When we speak of smartphone hardware, the first thing that comes to our mind is the camera section of the smartphone. It has become an unwritten rule for all smartphones to offer a powerful camera experience. To add further, the Android framework itself has evolved to be more powerful with a lot of scope for customization. This customization also applies to the smartphone camera.

Today one can mod the camera of any device. While reading about that you must have come across a particular term – “Camera2 API”. And this tutorial will help you check Camera2 API support on Android phones. Before we even get there, let us take a quick look at what the term actually means and how it affects an Android device.

What is Camera2 API?

Camera2 in Android is an Application Programming Interface (API) that gives developers access to certain features of the phone’s camera via the software. It was first introduced by Google in Android 5.0 Lollipop, with the purpose to extend the camera quality by controlling aspects like the shutter speed (ISO), auto-focus, RAW Capture, etc.

With the support of this API, smartphone cameras can have access to various features and take full advantage of the camera sensor. This indicates technology like HDR or other such photography features can be available on smartphones. The Camera2 API also allows for much more fine-grained control of the sensor, lens, and flash per individual frame.

For more information about the API, you can also refer to the official Google documentation here.

How To Check Camera2 API Support on Android?

The steps below will take you through the procedure in detail.

By default, your phone’s stock camera app or any other section in the OS will inform you if the device supports the said API. So, we will be using a simple third-party application to check Camera2 API support on Android.

After installing and reviewing almost every other app available for the purpose, we finally concluded that the Camera2 API Probe app by March Media Lab is the best. We also tested the app across different OEM devices with different Android OS versions and it laid off the correct results every time.

So, start by clicking on the download link below and install the app on your Android device via the Play Store.

Once the app is installed, you can easily use to it check Camera2 API support on your Android device. The next step will explain to you how to use the app and the information provided by it.

Step 2: Use the App to check Camera2 API Support

Here is an important part of the guide, so follow it carefully. After you install the Camera2 API Probe app, launch it by going to the app drawer. It will show you detailed information about camera hardware. It will also provide the info about the device and the current Android OS that’s running on it, under a seperate section. 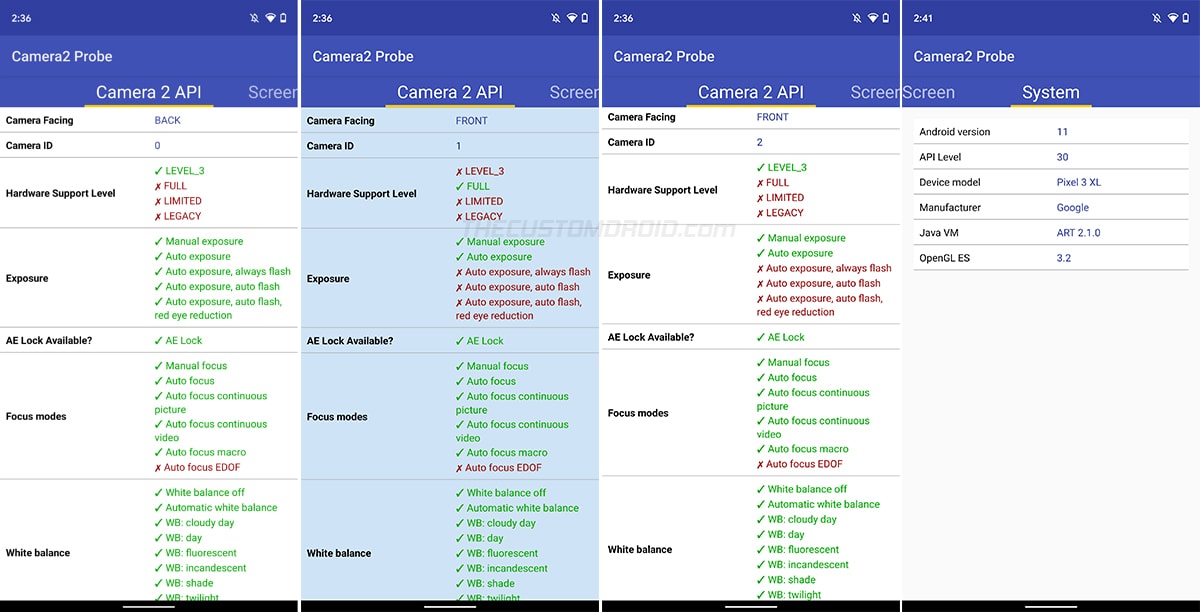 Under each Camera ID, there will be a sub-category of various features and their support details. One such sub-category is the ‘Hardware Level Support Category‘, which shows the Camera2 API support level on your phone.

The support levels here refer to the type of API implementation that been done on a specific device. And according to the official documentation, there are four different support levels for Camera2 API and these are Level-3, Full, Limited, or Legacy. Below is the explanation for each of these support levels in layman terms:

NOTE: A green tick means the feature under the category is supported. A red cross denotes no support for the feature.

While some Android phones do support camera2 API, it often is disabled within the software by the device manufacturer. These include phones like the Xiaomi Mi A1, Xiaomi Mi A2/A2 Lite, etc. So, for such devices, you will need to enable the said API by rooting the phone.

So you have just learned what Camera2 API is and how to check Camera2 API support on Android devices. The information comes in handy while you’re trying to install third-party camera apps like the Google Camera Port on your device that might require its support. The API is an example of how much of a big role the software plays to work with the camera hardware on any Android device.

If you have any questions, please let us know via the comments below.