Motorola is rolling out Android 8.0 Oreo to its latest X-series device. If you want to get it right now, then follow this guide to download and install Moto X4 Oreo Update.

The 4th generation of the infamous Moto X series was released in October 2017. The phone comes in two variants – Android One in the U.S and regular variant which is available in all other regions worldwide. Initially, users in the U.S reportedly received Android Oreo update on their Android One devices. As of the last few days, the update is also rolling out to the devices in India. It seems like it would take a bit more time before the update is available in all the regions. But if you are really keen on getting a taste of the latest Android version, then here’s your chance to manually install Moto X4 Oreo update.

Just like many other Android OEMs, Lenovo-owned Motorola is not staying far behind the line when it comes to pushing Android Oreo to its devices. According to the official announcement, at least 12 different Moto devices will receive the Android Oreo update. We recently saw the OEM pushing Oreo to the Moto Z2 Force on T-Mobile.

XDA senior member – lohanbarth has managed to get his hands on the official factory image. Thanks to his efforts that users can now easily install Moto X4 Oreo update. The new version is labeled as OPW27.57-40.

Several forum members have already tried and successfully installed this firmware on their devices. There are confirmed reports for the following models – XT1900-2 (India, Indonesia, Australia, New Zealand), XT1900-4 (LATAM), and XT1900-7 (Europe).

Of course, the update includes all the Oreo-exclusive features like Picture-in-Picture mode, Autofill framework, Background restrictions, and more. It also incorporates the December 1 2017 security patch. According to the users, the overall experience is now better than that on Nougat, which is quite as expected. 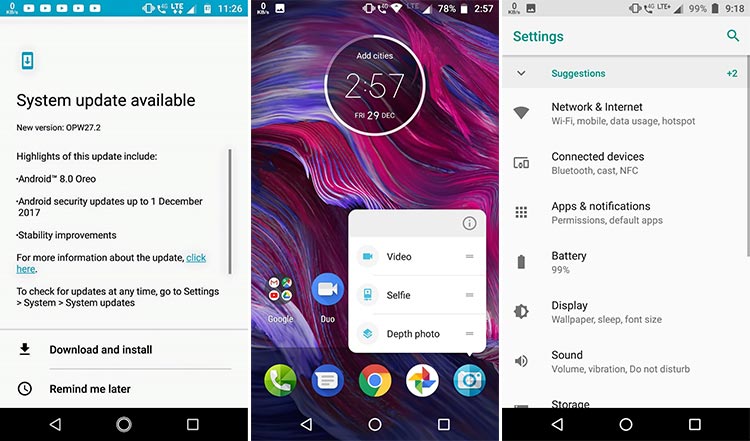 Before you install Moto X4 Oreo update using this method, make sure to check the OTA notification first. So, go to ‘Settings’ -> ‘System updates’. In case you have already got the OTA, there’s no need to go through all the hassle.

After the last command, your device will boot into Android 8.0 Oreo. So go ahead and enjoy all the new features. For more information on the process and user discussion, refer to the original XDA thread.

So you have just succeeded to install Moto X4 Oreo update. If you’ve got any questions regarding the update or the procedure, let us know by commenting.