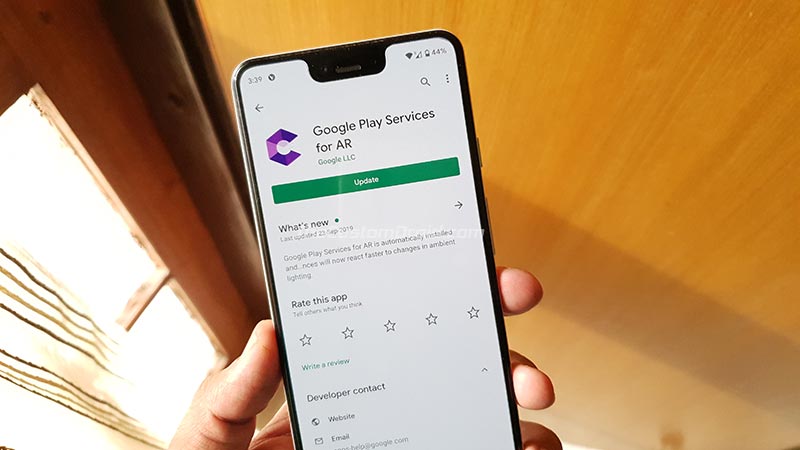 “ARCore” is now officially known as “Google Play Services for AR” in Play Store’s listing. However, it is still known as “ARCore” in Google’s developer platform. Through this post, you can download the latest v1.17.20042008 version of Google Play Services for AR (ARCore) app as an APK file, along with all the previous versions. Now before you do that, take some time to understand what ARCore actually is and how it works.

What is Google ARCore?

ARCore is Google’s Software Development Kit (SDK) for building augmented reality (AR) applications on various platforms including Android. According to Google, it enables your phone to “sense its environment, understand the world, and interact with information“.

So, how does ARCore work? – It uses three fundamental technologies to integrate virtual content with the real world using your Android phone’s camera.

* A majority of the information provided above was taken from this Google’s Developer page.

In order for an Android device to be officially supported by ARCore, it must pass Google’s certification process. The process involves checking the device’s camera quality, motion sensing capability, and hardware design, to ensure that users get a refined experience when using augmented reality applications.

According to Google, the following is the list of Android devices officially supported by Google ARCore.

Below is the complete changelog for the latest version of Google Play Services for AR app, along with that for the previous versions.

Google introduced ARCore back in 2017 and it was only recently renamed “Google Play Services for AR” to be a part of the Google Play Services. Android devices that are officially supported by ARCore can install and update the app directly via the Play Store.

However, if the app is not available on the Play Store for your device due to some reason, then you can download the latest Google Play Services for AR APK (courtesy of APKMirror.com) from below and install it manually.

Below we have also provided download links for all the previous versions of the app as well, in case you need them.

How to Install Google Play Services for AR (ARCore) APK

In order to install the APK manually, you must first enable the “Install unknown apps” or “Unknown sources” option on your Android device.

Once you have enabled the required option, follow the steps below to install ARCore APK on your Android device.

Now that you have ARCore installed, you can go ahead and try several augmented reality apps/features on your device. For instance, you can try Pokemon Go’s AR+ mode feature or download Google’s Measure app for taking everyday measurements easily. ARCore also enables you to use Playground (AR Stickers) in the Google Camera app.

There you go, you have just been able to download the latest Google Play Services for AR (ARCore) APK, along with the list of officially supported devices. Let us know your favorite AR app(s) that you would like to recommend via the comments.