In this post, you will learn how to easily fix Xiaomi Mi A1 Slow Motion video recording in Google Camera app.

Xiaomi Mi A1 is a widely accepted to be one of the top sellers of 2017 in the give price segment. The phone features a commendable hardware configuration that includes a Qualcomm Snapdragon 625 processor, a 5.5-inches IPS LCD display, dual 12MP+12MP camera setup with dual-LED flash and much more. Mi A1 also carries over the tremendous build quality with a premium finish. On the inside, is sports Android 7.1.2 Nougat out-of-the-box and can be upgraded to Android 8.0 Oreo as of now. Despite all the appreciable hardware and software, the owners have started facing a rather abrupt issue. Basically, the Google Camera app crashes while users shift to Slow Motion mode. If you’re facing the issue as well, then the steps below will help you fix Xiaomi Mi A1 slow motion video recording.

Although the phone has some supporting features, it is known for its not-so-good camera quality, even with a good dual-lens camera. To overcome the quality concern, we previously discussed how users can enable Camera2API on Xiaomi Mi A1 and use the Google Camera app for better imaging. Even though the pictures are of high quality, users identified crashes in the built-in camera application when they try to record slow-motion video. Thanks to XDA member sipollo for sharing a neat solution to fix Xiaomi Mi A1 slow motion video recording. 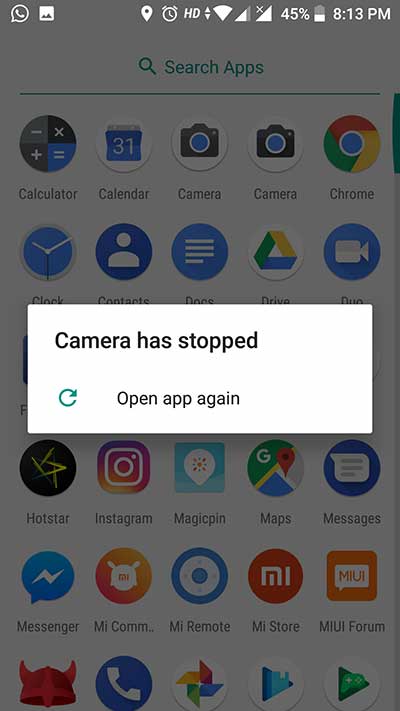 According to the original poster, the issue could be easily resolved using two different Magisk modules. These modules will not only fix slow motion video recording on Xiaomi Mi A1, but will also allow you to enable HEVC (High Efficiency Video Codec) for improved video quality. Apart from that, video capturing in bad lightning will improve as well. The former is primarily made to work with Oneplus devices, but it is found to be working fine with the Mi A1 too.

Now follow up on the steps to fix Xiaomi Mi A1 Slow Motion video recording.

This is a two-step process, so make sure to follow the instructions in the stated order.

By performing these steps you will be able fix the crashes. Users have reported that they are further experiencing long lags. So to finally fix Xiaomi Mi A1 slow motion video recording, follow the final step below.

These steps must have wiped the slow-motion issues that you were facing with the Xiaomi Mi A1. So, start recording the video without giving up the flow. We are quite certain that the issue will be addressed in the upcoming GCam mod release. But the time frame is not yet available.

So, this was our guide on how to fix Xiaomi Mi A1 slow motion video recording. If you have any questions regarding the procedure, let us know by commenting below.