Have you updated your Mi A1 to Oreo already? Then follow this simple guide to root Xiaomi Mi A1 on Android Oreo without using TWRP Recovery.

Xiaomi is much known for delivering Android smartphones in a pocket-friendly price tag. The company took a huge step last year by announcing the Android One powered Mi A1. The phone, while keeping Xiaomi’s standard build quality, design, and hardware configuration, offers the near-AOSP software. The major advantage of being a member of the Android One program is that the device will receive guaranteed software updates. That, in fact, has proved to be true. Xiaomi has already rolled out Mi A1 Android Oreo update. But if you’re not much satisfied with the regular stock features and want more, then you might want to consider rooting. The instructions below will help you root Xiaomi Mi A1 on Android Oreo using Magisk. 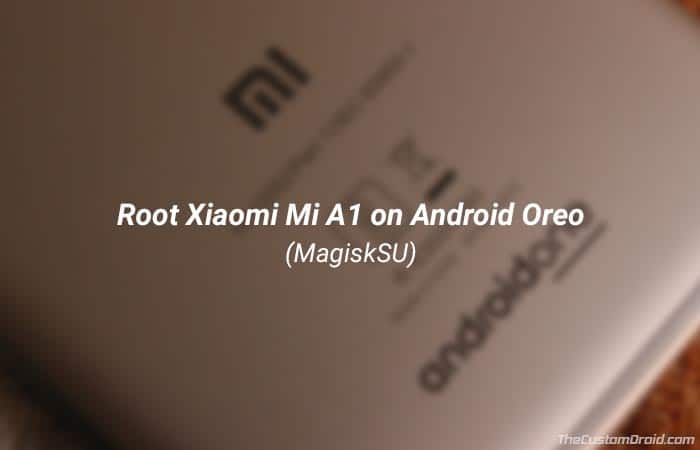 Xiaomi was on time and announced the first stable Android Oreo update for the device at the end of December 2017. The update initially had certain issues and was unfortunately called off mid-way. Later in January, the OTA was resumed with build number OPR1.170623.026.8.1.10. The new firmware not only fixed the specific issue but also brought the latest January 2018 security patch along with it. Now, if you’d like to root Xiaomi Mi A1 on Android Oreo, the steps below will cover it for you.

After updating the Mi A1 to Android Oreo, users can enjoy a list of hefty new features like Picture-in-Picture mode, Notification Categories, Instant Apps, and much more. However, it seems like even that is not enough. Several users out there (including me) have a tendency of rooting their device for the sake of additional features that the OEM doesn’t normally provide us with. For example, if you would like to use tweaks like ViPER4Android or Xposed Framework, you will need root permissions. In this tutorial, we will help you root Xiaomi Mi A1 on Android Oreo using MagiskSU. The additional benefits of using Magisk is that you can further install dedicated modules to enable third-party features on the phone.

Unlike the regular rooting process of flash the Magisk zip, we will be using the Magisk Manager app to patch the stock boot image. Once patched, the instructions will also help you to flash the modified boot image using fastboot. The steps are even simpler to perform. We will be updating this post with the links to latest stock boot images corresponding to the stable firmware released in the future. Rooting using this method will also allow you to install OTA updates using a simple trick.

Instructions to Root Xiaomi Mi A1 on Android Oreo

Once you have successfully flashed the patched boot image, your device shall be rooted running Oreo. If an OTA update arrives, just follow the steps laid down by Magisk Developer – topjohnwu. The method works flawlessly for different firmware versions. Once a new update is available, we will be updating the list of stock boot images for your convenience.

So, you have just been able to root Xiaomi Mi A1 on Android Oreo. If you have any questions regarding the procedure, let us know by commenting below.