Google has finally rolled out the first developer preview of the upcoming Android version. Follow this guide to download and install Android P Developer Preview on supported Google devices. These include the Pixel, Pixel XL, Pixel 2, and Pixel 2 XL.

The much-rumored Android 9.0 has finally made the touchdown with the very first developer preview. Ever since the launch of Android Oreo, the chatter has been going on for the next major release and it was alleged that Google has already started working on it. That has finally served to be true today when Google has pushed Android P Developer Preview 1 for the supported devices. Initial speculations proposed that the preview would land somewhere around 14 this month, but the Android-maker sure deserves a price for completely unexpected surprises. Google has already published the system images for this preview. So, developers/users who’d really like to test the upcoming Android version, can go ahead and install Android P Developer Preview.

The official timeline of the complete process has also been laid on the official program preview page. As you can see in the image below, the final release is set to be released in Q3, 2018. Even before that, we shall be seeing another four previews that would involve inclusion or subtraction of features during the complete testing phase. During this time, developers would be focusing on testing their respective apps with the latest API and help the Google developers in debugging any issues that may arise.

Users who are willing to test can easily install Android P Developer Preview system image. It’s worth noting that Google has significantly reduced the number of supported devices. The list is as follows:

You’d observe that older Nexus smartphones and tablets have been dropped from the support list.

Before you install Android P Developer Preview on your device, let us first take a look at the major highlights of the preview. The new version – Android 9.0 brings a ton of new changes and features to the OS framework. The major ones that were listed on Google’s own release notes is as follows.

That’s already quite a lot to mention. We have already noticed a series of serious new revamps in the user interface including Settings, Volume controls, Power menu and much more. We will soon be covering an extensive list of new features enlisting all the major and minor details of the changes that have took place. So keep an eye out for that. 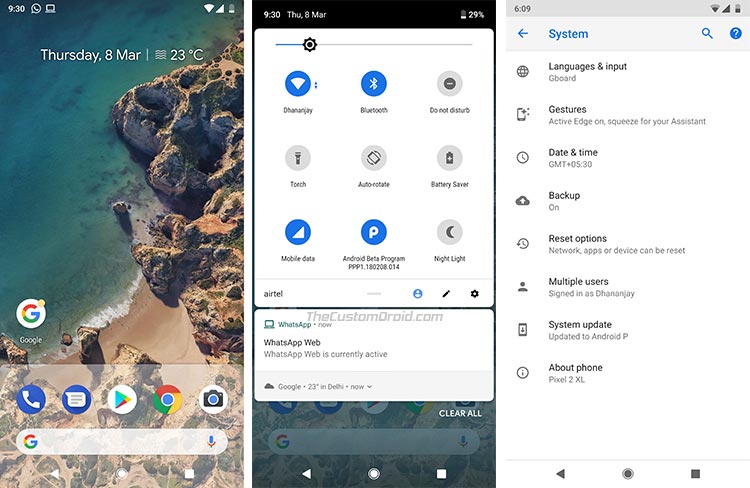 Now that you have acquainted yourselves with the features, head over to the instructions. In order to install Android P Developer Preview right now, you will need to flash the provided Android 9.0 system image onto your supported device. As of now, the Beta Program is not yet live, so you’d be forced to install this manually using the steps below.

Once you have fulfilled the requirements, follow the steps below to install Android P Developer Preview.

The links to the preview builds have been removed because the stable Android Pie update is now available. You can download Android Pie factory images or full OTA images for your Pixel device from here and here, respectively.

If you have downloaded the incremental OTA ZIP for your device, skip the steps below and follow our guide to sideload Android OTA updates using recovery.

When the booting process is complete, you shall set up your phone by following the on-screen instructions. Just as you’d start stepping in, you will notice several UI improvements in the system. So go ahead and enjoy Android 9.0 on your supported device now. Developers may start implementing the new behavioral changes and get their apps ready for the final release.

So, this was our concise guide to help you install Android P Developer Preview on Pixel/Pixel XL and Pixel 2/Pixel 2 XL. If you have any questions, leave them down in the comments.