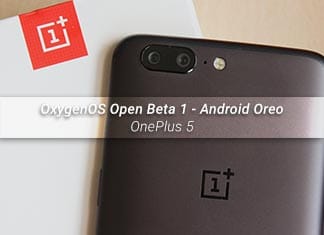 The first official beta release is here for the OnePlus 5. Follow the instructions here to download and install OnePlus 5 Open Beta 1 update based on Android Oreo.

With OxygenOS 5.0 for OnePlus 3/3T and the launch of OnePlus 5T, the manufacturer is now shifting its sole attention to Android Oreo. The company is standing by its statement and has finally rolled out the first ever Open Beta release for the OnePlus 5, as promised. The update will bring the Android Oreo experience to your device. Since this is the first Beta release for the said device, we will be guiding you on how to install OnePlus 5 Open Beta 1.

A few weeks ago, we saw the first Android Oreo beta leaked ROM for OnePlus 5. Today, OnePlus community member David has announced the first ever Open Beta release for the device. The level of excitement is at its peak, not just because this is the first Open Beta, but also that it brings the fine taste of Android Oreo to your device.

The update brings major fixes and new features to the OnePlus 5. The changelog mentioned in the source is as follows:

The current OxygenOS version of OnePlus 5 Open Beta 1 is OP5_O2_Open_1. We are not quite sure how far the device is from receiving the final stable update. But as per the official statement, it should be released sometime during early 2018.

The manufacturer has pushed the official link to the general public. We will be covering two different methods to install this update on your OP5.

This is a beta release and may be unstable for daily usage. We absolutely don’t take responsibility for any damage/dysfunction caused to your device after installing it. If you’re not sure what you’re doing, kindly wait for the official Stable update.

Now before you even get to the instructions to install OnePlus 5 Open Beta 1, make sure to fulfill the stated requirements.

Now, you can install the update and choose the method depending on your device’s current situation. If your OP5 is running OxygenOS 4.5.14, you can simply use method 1. In case your device has TWRP recovery installed, you can use method 2.

Your device will reboot into the recovery and install the OnePlus 5 Open Beta 1. Once done, your OP5 will boot into the updated ROM.

Your phone will boot into the system. You shall go ahead and experience the new features including Picture-in-Picture mode, updated launcher and more.

So, you have just been able to install OnePlus 5 Open Beta 1 update. If you have any problems performing the stated procedure, let us know through the comments.