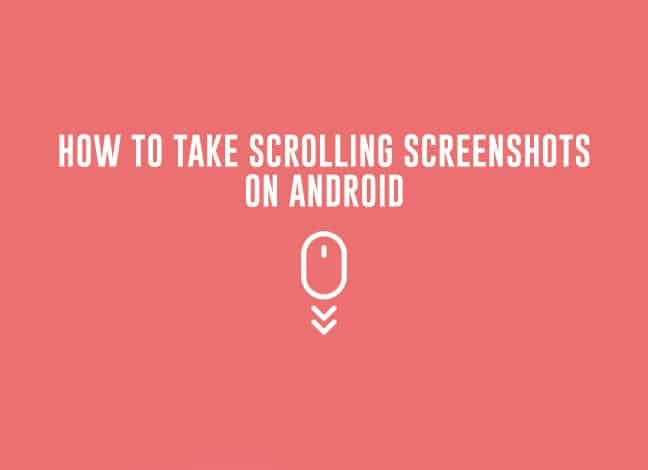 Instead of taking a number of screenshots and then further organizing them, it’s much more efficient to take one, which has all the information you wanted to share in a single image. So, in this article, we will show you how to take Scrolling Screenshots on any Android phone“.

Screenshots are the snapshots or images which show the exact view of a screen. It is very useful for sharing information like Conversation, as it shows the exact captured information. It’s pretty simple to take a screenshot on Android phones. But, regular Screenshots do not include the information outside the display frame in a single capture. That’s where, scrolling screenshot helps you to capture an entire webpage, your app drawer, or even a long conversation within your favorite messaging app.

A regular Screenshot can be easily captured by the unique button combination like Power button along with Volume down or by pressing power and home button together (Basically, depends on the OEM). But these are not that efficient. Take an example when you would want to share your WhatsApp chat with someone. Taking and sending screenshots of different parts of the chat could be very confusing for the person on the other end. And that’s where taking Scrolling screenshots works the best.

Some new Android smartphones like the OnePlus 5, natively allow you to take scrolling screenshots, which is a great feature. Well, if your phone doesn’t feature the long Scrolling screenshot, don’t be sad about it. There are a number of apps available on Google Play Store that allow users to take Scrolling Screenshots without much hassle. Here, we will be demonstrating you through a very popular app called Stitch & Share.

First of all, download and install the Stitch & Share app from the Google Play Store. Once you have downloaded and installed it, run the app.

Now, you can do two things, you can either choose automatic capturing and let the app do all the job, while you carefully scroll through the area. Or, you can capture individual screenshots on your own and then combine them using the Stitch & Share app.

Done! You have succeeded to capture Scrolling screenshots on your Android phone. Now, you can share a conversation Screenshot to your friends easily in one image.

I hope you enjoyed the article. Let us know, what do you think of this app?. If you have any problem regarding capturing Long Scrolling Screenshots, then feel free to drop a comment.