The Pixel 2 brings a considerable amount of new features, of which the new homescreen setup is also a part of. The new widget and re-positioned Google search bar on the homescreen now suit much better to the overall system. So download Google Pixel 2 Launcher and Pixel Wallpapers app on your Android device without any need of root.

The phone is an update to last year’s Pixel, offering a list of upgrades and new features including Assistant Squeeze, Always-on Ambient screen, new launcher layout, and much more. Today, we will be focusing on the all-new visual outlook that the software offers in the Pixel 2. If you’ve already seen the images of the latest device, you would have noticed that the homescreen is quite different than what you have experienced in Nexus and Pixel devices. Here, you will be able to download Google Pixel 2 Launcher and Wallpapers APKs for manual installation.

We will today shed some light on the software part, and to be precise, the launcher. You must have already seen the new layout in several press release shots and renders by now. And no doubt, it seems like something fresh. So read below to download Google Pixel 2 Launcher on your Android device and install it.

You must have already tried to mimic Google Pixel 2 Launcher style on your device using Nova Launcher and widgets like “Another Widget”. But it seems like there’s finally no need of them.

The APK file for the new Google Pixel 2 Launcher and Pixel Wallpapers is now available for download. It has been verified and uploaded on APKMirror by the user – Ooooooyeah. The new version is labeled P-4275643 (301). We conclude that the APK has been directly extracted from the Pixel 2 device itself and the package name just confirms this.

The launcher APK follows the same package name as that of the original Pixel Launcher – com.google.android.apps.nexuslauncher. This means, that if you have Pixel Launcher installed on your device, it will be updated to the new one.

Over to the features, the all-new Google Pixel 2 Launcher brings some serious changes to the native Google Now Launcher/Pixel Launcher layout.  The search widget has been pushed down to the bottom, just above the NavBar. The top part of the homescreen now shows a time/calendar widget, which is pretty new itself.

We will stop the talking right away now. Just go ahead and get Google Pixel 2 Launcher and Wallpapers app on your device right now. Before you proceed, you will need to enable Install unknown apps setting by going to Settings > Apps & notifications > Advanced > Special app access > Install unknown apps.

Once downloaded, use a file manager to navigate to the storage and install both the APKs manually. When done, tap on the home button and select Use Pixel Launcher as Home with “ALWAYS”. 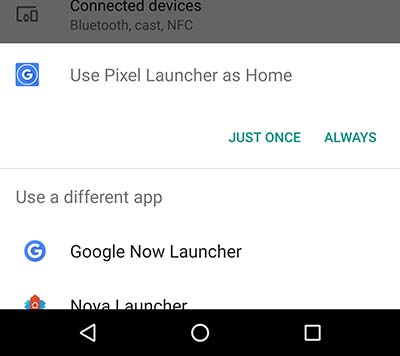 There you go! You were successful to download Google Pixel 2 Launcher and Wallpapers app on your device. Go on and taste the fresh new features.