Through this page, you can download the latest Google Camera 8.1 APK from Pixel 5 and install it on older Pixel devices. This latest Google Camera app update comes with a revamped UI and new features like Cinematic Pan & video stabilization, Night Sight in Portrait Mode, easier zoom controls, and more.

The Pixel series from Google are best-known for their camera experience with built-in AI camera features like Astrophotography Mode, HDR+, Night Sight, Portrait Mode, and more. We have seen every new Pixel device carry certain new camera features, which are limited to the said devices themselves. And the 2020 Pixel smartphones are no different.

Google has finally launched Google Pixel 5 and Pixel 4a (5G), along with some other products during the “Launch Night In” event. According to Google, the new Pixel phones carry over the Pixel camera legacy and bring “industry-leading photography features to the next level” with a new Ultrawide lens and several new camera features.

The latest Google Camera app on the Pixel 5 comes with some really interesting features, some of which were hinted at in the past by XDA-Developers. A lot of them have made their way into the production.

So before you head to the download links and install the latest Google Camera 8.1 app on your Pixel smartphone, let us take a dive into all the new features it brings.

The first noticeable change you’ll observe is a revamped UI (user interface) that looks much cleaner and more accessible. The images below will help you compare these new UI changes in comparison with the previous Google Camera 7.6 app. 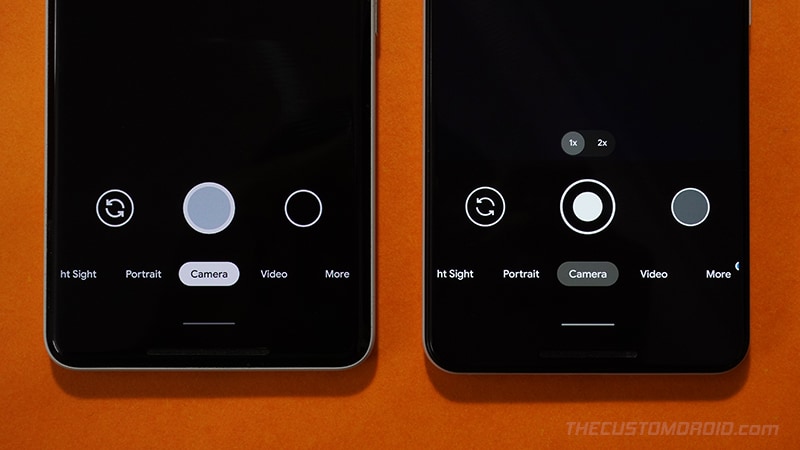 The most subtle change has been done to all the buttons in the camera app. The shutter button is now hollowed out, the rest of the icons are less dense, and a new grey accent is now used to highlight camera modes instead of white.

The app also introduces new quick zoom buttons at the bottom of the viewfinder. Users could further long-press these buttons to bring up the zoom slider, which was the only option up until version 7.6.

For the front camera, it is possible to quickly switch between 1x and 1.4x zoom in all three modes, with 1x and 1.2x zoom in Portrait mode. For the front camera on older Pixel phones, the zoom levels are .7x and 1x on all the modes, because they lack the additional ultrawide lens on the Pixel 5 and Pixel 4a (5G).

On Google Camera 7.6 (and below), switching to Slow Motion and Time Lapse video modes would require navigating to the “More” section on the extreme right of the app’s interface. With Google Camera 8.1, quick access to these modes has been added to the default video mode. So users can easily switch between Normal, Slow Motion, and Time Lapse modes with just a single tap of a button.

The revamped UI in the new Google Camera app is much more visually pleasing and accessible at the same time, allowing users to keep their focus on the viewfinder while capturing pictures and videos.

With the visual changes out of the way, let’s look at the new features.

Cinematic Pan is the next major feature that allows users to smoothly pan videos while capturing, eliminating a major amount of shakiness. According to Google, Cinematic Pan – “gives your videos a professional look with ultra-smooth panning that’s inspired by the equipment Hollywood directors use“.

The camera app now also offers new stabilization options in the Video mode. These are:

To know more about these stabilization options and how to enable them, see the official support article by Google.

As recently reported by XDA, Cinematic Pan and other stabilization options are now available for older Pixel phones via the latest Google Camera 8.1 app update. Non-Pixel devices might get the feature earlier in form of the infamous Google Camera Ports. 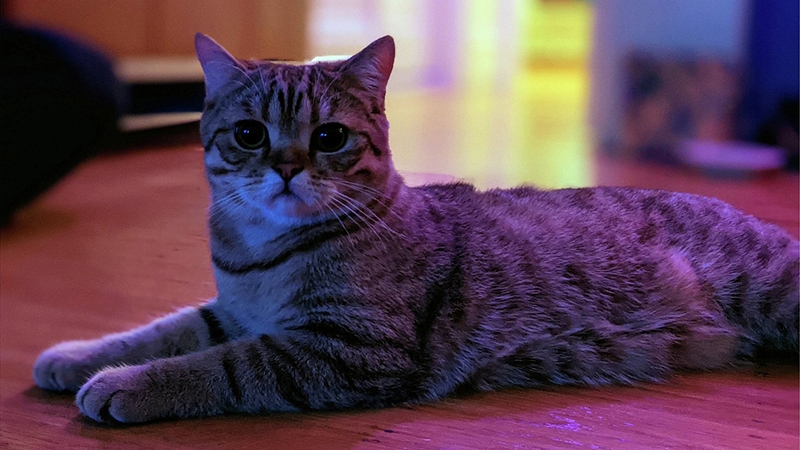 Night Sight and Portrait Mode are the two most prominent features of the Google Camera app. The former allows you to capture photos (even of the night sky using Astrophotography) in extreme detail under low-light conditions. The latter allows the users to capture photos with an artificially created (yet extremely precise) blurred background (bokeh effect) without a dedicated depth lens.

On the Pixel 5 and Pixel 4a (5G), Night Sight is now built into Portrait Mode as well. This means users can still capture images that focus on the subject and artificially blurs the background, even in low-light conditions. To accompany this feature, Portrait Light in these devices can further illuminate the subject when the lighting isn’t right.

Super Res Zoom was introduced by Google with the Pixel 3 as a ground-breaking improvement over the traditional digital zoom techniques when it comes to smartphone cameras.

The Google Camera app utilizes its burst photography to capture multiple frames of a scene, upscales a crop of a single image, and then combines the frames into a single high-resolution picture. With the new Pixel phones, several improvements have been made to Super Res Zoom, so you get sharp and detailed images whether zooming in or zooming out.

According to XDA, the community’s senior member and a renowned GCam Mod developer cstark27 was able to get the new Super Res Zoom working on his Pixel 4 XL and demonstrated the improvements in the Super Res Zoom feature in Google Camera 8.1. Below are the images shared by him.

Face Retouching Turned Off by Default

Photo filters, and especially “beauty” filters have got huge traction in recent years. These filters generally smooth out the skin, freckles, pimples, and other details of the face. As per a study published by Boston Medical Center and Google – “These default filters can quietly set a beauty standard that some people compare themselves against“.

Google, in an effort towards digital wellbeing, has created “people-centric guidelines” to give complete control to the users and let them decide if and when their appearance is changed in the pictures. Following the same guidelines, Google has turned off Face Retouching by default in the Google Camera app on Pixel phones. The app also provides information on various levels of face retouching and shows examples to demonstrate what kind of changes are applied. 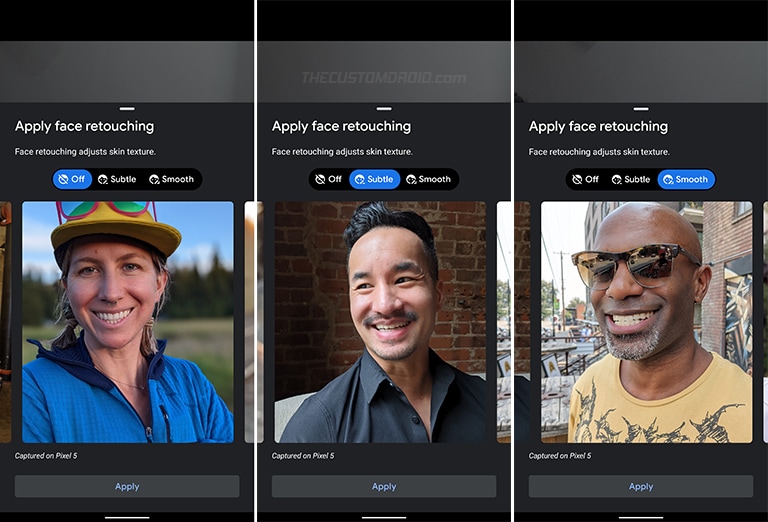 Additionally, when the phone is parallel to the ground, the levelers are replaced with crosshairs to help users tilt their phones when taking pictures of the sky, roof, or the ground.

While version 8.1 brings a couple of new things, it also includes all the previous features as seen on Google Camera 7.6 and below. These include the new options to toggle 4K video recording, DND access, Astrophotography Mode, and more.

As reported by several online portals like Android Police and 9to5Google, previous Pixel devices are now receiving the version 8.1 update of the Google Camera app via the Play Store.

If the update is not available for your particular device yet, you can download the latest Google Camera 8.1 APK from below. It was extracted directly from the Google Play Store and published by APKMirror, so you can be very certain of its integrity.

The app is available as an App Bundle in .apkm file format. It includes the one base APK and eight split APKs targeting ARM64 device architecture, xxxhdpi screen size, and 6 different languages.

When Google launched the Pixel 5 and Pixel 4a (5G) earlier last month, they shipped with Google Camera 8.0.018 installed on them. The XDA team was able to extract the camera app from Pixel 5 and published it for the users. Later on, folks at APKMirror also uploaded an updated version (v8.0.101) of the app.

Unlike the ones extracted from the Play Store, the GCam 8.0 APK provided by XDA comes in .apks file format. Although it’s a different App Bundle format, the installation instructions stay the same.

The official Google Camera app cannot be installed on non-Pixel devices, so do not waste your time trying. GCam developers have already started porting the Google Camera 8.1 app for such devices and we will update this post with the relevant links and information.

How to Install Google Camera 8.1 on Older Pixel Phones

You can install the Google Camera 8.1 app on any Pixel phone including the latest Pixel 5, as well as past phones like the Pixel 2 (XL), Pixel 3 (XL), and Pixel 3a (XL), Pixel 4 (XL), and Pixel 4a. The only requirement is that your phone should be updated and running Android 11.

Since the camera app is available as an App Bundle, you’d need to go through a few extra steps as compared to the traditional APK installation. The instructions below will take you through these steps.

Once the app has been successfully installed, press the “Open app” button to launch the updated camera app on your phone. 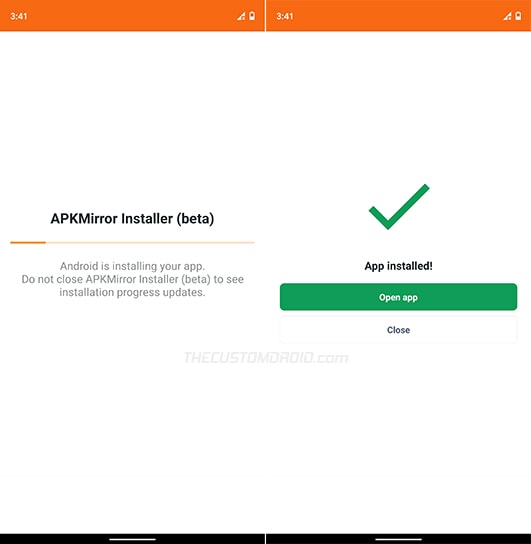 There you go, you have successfully downloaded and installed the latest Google Camera 8.1 app on your device. What do you feel about the new features and changes it brings to the UI? Do you think that Google Pixel 5 will still manage to outrun the competition such as the OnePlus 8T, Galaxy Note 20, etc in the camera department? Let us know via the comments.