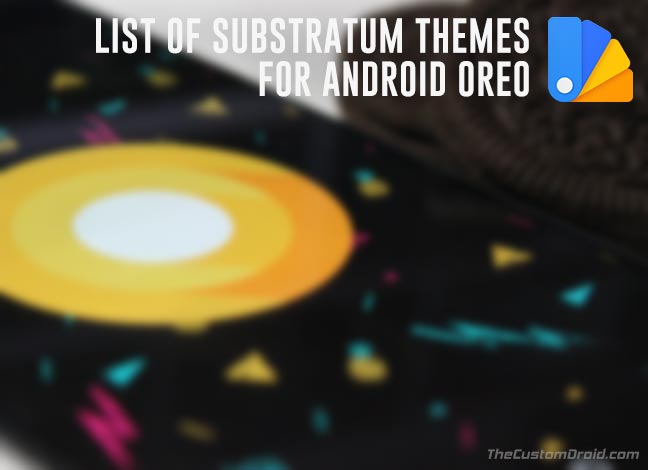 Check out the list of supported Android Oreo Substratum themes that you can install and use on your device right now!

We have talked a lot about Substratum on Oreo, lately. And why not? You don’t see such things everyday. Substratum could be used in multiple ways to customize your Android device from tip to toe or technically, from OS framework to apps. And Substratum helps you achieve all this without Root. Of course, we are thankful to Google for including native OMS (Overlay Manager Service) support. Anyways, you will be seeing a lot from us on this topic in the coming days.

As for today, we are here to provide the list of all Android Oreo Substratum themes that could be installed on your Oreo-running device. Many or most of these themes are PAID and considering the amount of hard work that goes into building them. The list will be constantly updated as more and more themes are released/updated with Oreo support.

How to Install Substratum Themes on Android Oreo

— How to Install Custom Themes on Android Oreo without Root

Once done, you can easily download the theme of your choice from the list mentioned below and use them to tweak your device’s visuals.

We have compiled this list of Android Oreo Substratum themes that work without any problems with Oreo. The themes have been thoroughly tested and officially support Android Oreo.

It is wise noting that any themes available on the Google Play store that explicitly state “RRO” or “Legacy” will not work on Android Oreo. The RRO project is now depreciated and Overlay Manager Service is its new face in the market, thanks to Sony. Again, we do not recommend you to install any old theme that uses RRO.

Please make sure that you read the app description on the Play Store and keep yourself informed about any do’s and don’ts that the theme developer mentions. So let’s get on with the complete list of Android Oreo Substratum themes.

The theme is pretty popular among the Substratum community and is highly rated on the Play Store. It offers 41 accent colors and 16 background colors that could allow you to create different combinations as per your choice. The theme not only works out the SystemUI and Navigation bar but also adds supports for all major Google Apps and several other third-party apps including Greenify, Facebook, Saavn, Tumblr, WhatsApp and much more.

Get Compound for Substratum on Google Play

The theme has been developed by “Archangel apps”. It focuses on using the current wallpaper as a background for the complete system interface and every app that it supports. So you theoretically have a different theme every time you change a wallpaper. It targets a large list of Google Apps and major third-party apps that you would use including Nova Launcher, Instagram, Twitter, Dropbox, WhatsApp, and more.

Belo is one of my favorite of all Android Oreo Substratum themes. It offers a white and a clean minimalistic interface for those who don’t like much colors all over the screen. The theme has been developed by “De Jan” and is also highly rated on the Play Store. It pays more attention to the SystemUI and majorly used Google Apps and also a few other third-party apps including DU Gallery and Stable WhatsApp releases. It has special instructions for those running Oreo, so make sure that you read the app description first-hand to avoid any troubles.

Get [Substratum]Belo on Google Play

This theme has also been brought to us by “Archangel apps”. Onyx aims at bringing inverted and dark scheme to the Oreo interface. The theme will work its magic on a large list of apps including AOSP and Google Apps, and other apps including Twitter, WhatsApp, XDA, cLock, Dropbox, AdAway, etc. It offers filled-in navigation bar icons which pair best with the contrast black/dark colors of the theme. The one thing in this theme, that I personally don’t like is the battery icon in the status bar. However, you can selectively remove it from the overlays.

The theme is developed by “Piereligio”. It aims at bringing two ideas together. So if you want to use a dark theme without losing the stock approach, this is the best one available for you. It has been recently updated to be used on rootless Oreo devices. The theme embeds your Android with the Pixel boot animation and also injects the default Pixel/Nexus ringtones and sounds. There are 14 different wallpapers available that could be used with 14 accent colors for the best dark visual experience. As for the apps that this theme can customize, includes AOSP apps, Google apps, Samsung apps, and other third-party apps including XDA Labs, Telegram, Pixel Launcher, etc.

Stock Dark Substratum theme could be purchased from the Play Store at $1.49 (INR 95).

One of the very few FREE Android Oreo Substratum themes available. Just because this theme is FREE, doesn’t make it any less. It still offers complete customization. The theme only aims at one thing – customizing your stock Oreo appearance with a dark scheme with various accent colors. The theme also offers four different navigation bar styles to match. However, if you feel they are less, you can follow our tutorial to install and enjoy 22 different NavBars on Oreo.

Sai’s Android Oreo Black theme is available for FREE on the Play Store.

Another one of Android Oreo Substratum themes that offer a clean interface with material-style colors. Focus pairs 35 different accent colors and 9 background colors to create one of the best minimalistic interfaces. It uses self-made icons by the developer that makes the experience more personalized and a bit different from the stock. Apart from the SystemUI and framework, the theme covers all major Google apps, and third-party apps like Instagram, Facebook, Pixel Launcher, Adaway, SuperSU, Yahoo Weather, PowerAMP, etc. It gives a refresh to your basic app experience including messages and dialer.

The theme is developed by “Gianluca Spadazzi” and brings the transparent glass-like outlook to your phone. If you really like your stock appearance, you can keep it and modify it further using this theme. The best part about this theme is that it’s highly customizable. Most aspects including accent/background colors and styles could be easily personalized. It works out most of the system elements to be transparent, including keyboard, navigation drawer/Quick Settings panel, messaging app, settings etc. It also offers 16 different toast menu styles and borders and customizable icons everywhere in the system. Now when I say it’s highly customizable, I really mean every inch of it. You wouldn’t know until you have tried this theme.

So there you have it, the list of Android Oreo Substratum themes that are currently available in the market. We are also constantly searching for more FREE themes for our readers.

If you think we have missed something, don’t hesitate to let us know through the comments. We will make sure to put it up on this list. Until then, stay tuned while we come up with more tutorials and lists.