BBK Electronics launched the world’s first phone with a rotating camera back in 2013. But that device, Oppo N1, failed to meet the expectations of the masses. Fast forward 6 years and Asus has launched the Zenfone 6 2019 along the same lines. This time though, things are more on the optimistic side and the camera has a major role to play. It boasts of a Sony IMX586 48 MP sensor combined with a 13MP ultra-wide lens. and has an eye-catchy rotating motorized flip camera.

Although the Asus ZenFone 6 (2019) is capable of clicking more than decent pictures with its swiveled rotating camera, yet it seems the team over at Asus has decided that this camera could further be optimized by incorporating some extra features. Keeping this in mind, the Taiwanese OEM manufacturer decided to help third-party developers. This led to the development of the Google Camera Port for ASUS Zenfone 6/ASUS 6z (2019). If you are interested in installing this port on your phone, then follow the below tutorial.

Arnova has released the Google Camera V2.2.190716.1800. This port is based on version 6.2.030 of the Google Camera app. Refer to the ‘Downloads’ section for the link. Changelogs for this version could be found here. 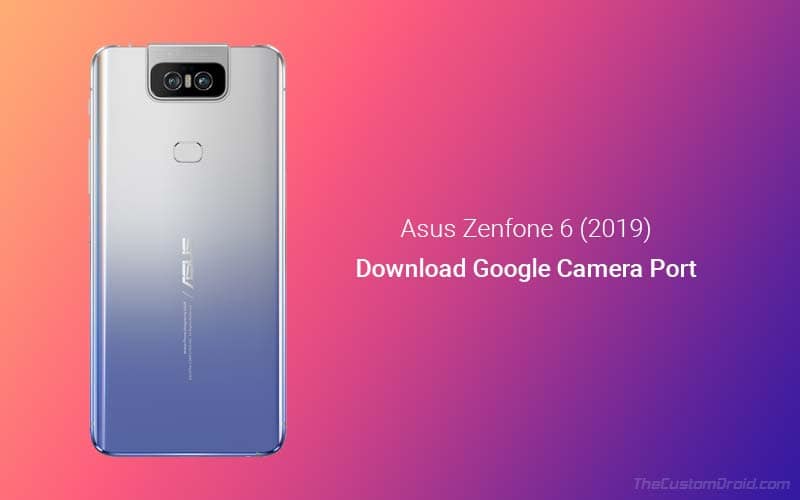 Asus ZenFone 6 (6z) is among the most talked-about device in the market, owing to its unique motorized flip-camera design. But that is not the only domain where it has managed to impress everyone. This time Asus also took a step further towards the development front. To further speed up this process, they distributed few units of ZenFone 6 (2019) to the developers, teaming up with XDA in the process.

One among them is a senior developer over at XDA, known as Arnova8G2. He is well-known for porting Google Cameras for various devices, and this time he has done the same for Asus ZenFone 6 (ZS630KL). He also confirmed that this device is the first ever to capture HDR+ enhanced photos with its 48MP camera using the Google Camera port, something that even OnePlus 7 Google Camera port is yet to achieve.

Also, as is the case with most of the flagship devices nowadays, the ASUS ZenFone 6/ASUS 6z (ZS630KL) too has a straight-forward method of installing Google Camera port. The device comes with Camera2API enabled out-of-the-box, hence there is no need to unlock the bootloader or root for this.

With that said, have a look at the below for the comparison between the photos captured by the stock camera versus those taken from GCam Port on Asus Zenfone 6 (2019).

Have a look at some of the photos clicked by the stock camera (on the left) and by the Google Camera port on Asus Zenfone 6 2019 (on the right). Thanks to peterunderwood for sharing these photos.

What do you think? Does the device really needs a GCam or is the stock camera just fine enough? Do share your views in the comments section.

All the ports provided above are being developed and maintained by Arnova8G2. So, huge kudos to him and also to Asus for providing him an Asus Zenfone 6 2019 for aiding the development.

How to Install Google Camera Port on Asus ZenFone 6 (2019)

Installing the GCam port on ASUS ZenFone 6/ASUS 6z (2019) is a pretty easy procedure, just follow the instructions below. Note that not all versions of the Google Camera port require an XML config file. In those cases, you will just need to install the GCam Port APK and skip the steps to restore the XML config file.

That’s it! Google Camera should now be set up and ready to use with the provided configuration. However, if you aren’t satisfied with the results, go ahead and make the desired changes from the ‘Settings’ menu of the Google Camera port you just installed.

GCam Port is also available for:

You have now successfully installed the Google Camera port on your ASUS ZenFone 6/ASUS 6z (2019). If you have any queries about this article, do ask them in the comments section below. Also if you want to join the discussion forum, troubleshoot problems or support its development, then head over to the XDA support page.