Although an unofficial build of TWRP recovery is available for the Zenfone 6, it doesn’t work well with the latest software currently. So, in this tutorial, we will show you how to root ASUS Zenfone 6 (ASUS 6Z) without TWRP, using Magisk.

Recently, we covered a detailed tutorial on how to install TWRP on Asus Zenfone 6 (ASUS 6z) and root it using Magisk. However, several of our readers and also users over at the XDA thread have reported that TWRP doesn’t work following the latest software update on the phone. As per the said users, using the ‘fastboot boot’ command to temporarily boot the TWRP recovery image fails. Once the command is executed, the phone reboots and enters the Bootloader Mode, instead of TWRP Recovery Mode.

XDA member mauronofrio, who compiled and built the unofficial TWRP for the Asus Zenfone 6 also responded to the reports. According to him, he doesn’t own the device himself, which makes debugging, fixing, and retesting the issue even harder. He also added that TWRP lead developer Dees_Troy and bigbiff have recently received the Zenfone 6 under the developer program. Which means that the device may gain official TWRP support in the near future. And so, he wouldn’t be releasing any updated for now.

Even if not for the given situation, rooting your Zenfone 6 without TWRP has its own advantages. For instance, you can easily install OTA updates on your rooted phone with the least amount of effort. 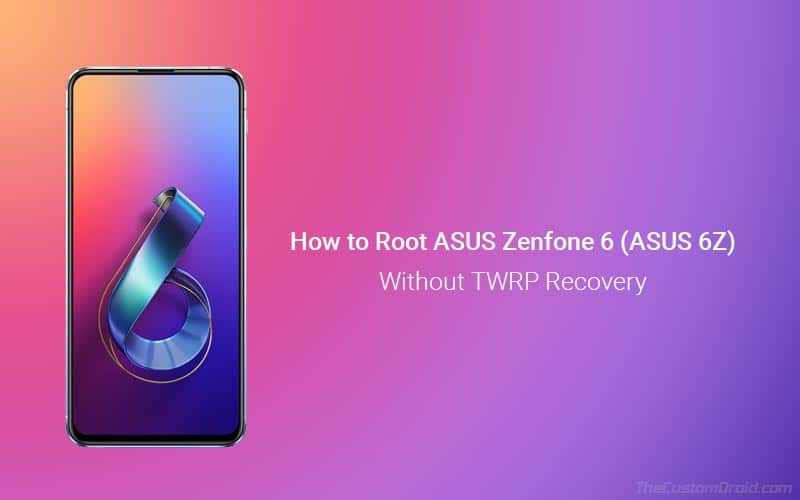 So, irrespective of the reason you are here, the instructions below will guide you on how to root ASUS Zenfone 6 (ASUS 6z) without TWRP. This could be easily done by patching the stock boot image with Magisk and then flashing the patched boot image to the device using fastboot to root it. The process is pretty easy and same as we’d had detailed for the OnePlus 7/OnePlus 7 Pro and many more devices. So, just go ahead and follow the instructions below to root your Asus Zenfone 6 (ASUZ 6z).

How to Root ASUS Zenfone 6 (ASUS 6z) without TWRP?

For your convenience and better understanding, we have split the instructions into three major steps.

Step 1: Get the Stock Boot Image

In order to get the stock boot image, you must download the official firmware update package corresponding to the software version installed on your Asus Zenfone 6/Aus 6Z. The firmware package could be downloaded from here. Once downloaded, you will need to extract the downloaded package for the Payload.bin file.

Once the process finishes, the patched boot image could be found in [internal storage]/Download as ‘magisk_patched.img‘ file.

Now that you have the Magisk Patched Boot Image, follow the instructions below to flash it and root your ASUS Zenfone 6 (ASUS 6z).

Your phone should now be rooted using Magisk. Once it boots into the OS, go the app drawer and launch the Magisk Manager app to confirm.

The instructions above flash the patched boot image to the active slot on your ASUS Zenfone 6 (ASUS 6z), leaving the secondary/inactive slot untouched. This means you can easily install future OTA updates on your phone easily while still maintaining root. For a more detailed explanation of how to do it, follow this link.

Now that your phone is rooted, you can go ahead and install Magisk Modules for third-party features or install audio mods like ViPER4Android. You can also use the MagiskHide feature to hide root from certain apps.

There you go! This was out detailed tutorial on how to root ASUS Zenfone 6 (ASUS 6z) without TWRP recovery. If you have any questions regarding the procedure, do let using know by commenting below.