Xiaomi has started rolling out another stable MIUI update for the supported devices. Through this post, you can download MIUI 9.5 Global Stable ROM for Xiaomi and Redmi devices. The detailed instructions will allow you to install latest Recovery ROM/Fastboot ROM on your device.

Along all other manufacturers, Xiaomi is also moving towards the Android Oreo update slowly. At the same time, the OEM is also releasing regular updates for all its devices as well. It was back in January when the last MIUI 9.2 Global Stable ROM was announced. Post which, we have seen several weekly Beta releases, to ensure that the end product delivered to the day-to-day user is stable enough for usage.

The update was first announced on 20th March and has already started reaching out to the users over-the-air. If you still haven’t received the OTA notification or want to install it manually, then you can easily download MIUI 9.5 Global Stable ROM from below. 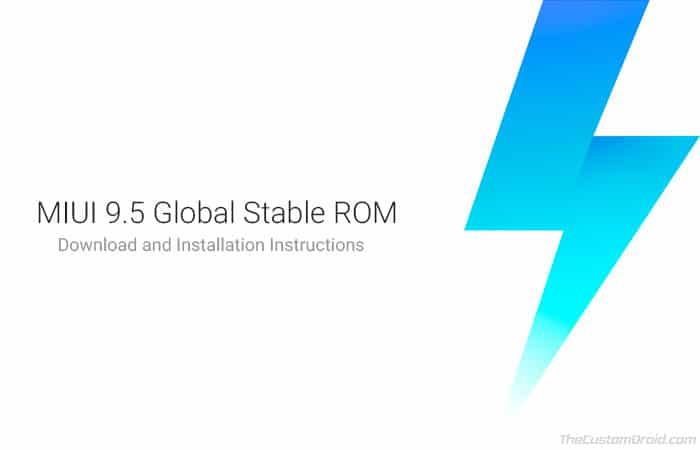 The release was made at the MIUI forums earlier in March. According to which, the OTA will be rolled out for a bunch of devices first, and will slowly be available for others in April. On a broader look, MIUI 9.5 brings some major changes, features, and improvements over the previous build. Which means you will get to enjoy a more stable and better performing software experience on your phone.

Being a stable update, the new build brings a considerable amount of changes and new features to the supported devices. So before you head down and download MIUI 9.5 Global Stable ROM for your device, take a look at the changelog below.

Since the company has announced the update for a long list of devices, chances are that it might take a few days, to weeks for the OTA to arrive. For more details, visit MIUI release thread. If you’re not that patient, then you can simply follow the steps below to install MIUI 9.5 Global Stable ROM on your Xiaomi/Redmi device.

The rollout has already begun and will be reaching out to the supported devices in phases. The community, on the other hand, has also provided links to download MIUI 9.5 Global Stable ROM. Users can grab the Recovery/Fastboot ROM for their device and follow the instructions below to install it.

Simply press Ctrl + F on your keyboard and search for your device name in the list below.

Now that you have attained the flashable ZIP file for your phone, you can easily update it to the latest MIUI stable ROM.

Once you have been able to download MIUI 9.5 Global Stable ROM for your device, you can follow the instructions below to install it. Flashing the recovery ROM could be easily done using the inbuilt updater app in device settings. However, if you wish to make a clean install, then install Fastboot ROM using the Mi Flash tool. Simply click on the tutorial link below for the ROM you have downloaded.

When your phone boots, it shall be running the latest Stable MIUI firmware. You may further explore the system for new features and enjoy the better software experience. Xiaomi is already working on the Oreo release and has already started with the Mi 6 and Mi Mix 2. It shouldn’t be long when other devices including the Redmi Note 5 Pro will start receiving it. In other news, the OEM also announced MIUI 8.3.29 Global Beta last week.

So this was our post to help you download MIUI 9.5 Global Stable ROM for Xiaomi devices. If you have any question in regards to the updates, files, or the procedure, drop a comment below.