Every passing week, more and more OEMs are pushing in the latest Oreo update starting from their top line of devices. And Nokia doesn’t seem to stay behind after all. The manufacturer seems to be gaining its grip back with its Android lineup, packing powerful hardware and close-AOSP software. Nokia has kept its end of the promise and has released regular monthly updates for the Nokia 6.

The first Oreo beta release for the device was made in December, last year. It didn’t take much longer until the stable rollout was announced in January 2018. Last week, the company pushed the Nokia 6 Android 8.1 Oreo update. The official OTA ZIP is now available and can be easily sideloaded using the stock recovery.

Updated on 20 January 2019: January 2019 Security Update for Nokia 6 is now available. Links have been updated!

To recap, the Nokia 6 was first released back in 2017, powered with Qualcomm Snapdragon 630 chipset, 5.5 inches full HD display, 16 MP rear camera with ZEISS, and more. Something commendable about the new Nokia-branded Android phones is their stock Android experience with support for consistent software updates. The phone has received a decent amount of attention in some major regions worldwide.

Before we get to the steps to install Nokia 6 Android 8.1 Oreo update, let us take a quick look at the changes.

The announcement came in, directly from HMD Global’s Cheif Product Manager – Juho Sarvikas through his Twitter account. It wasn’t much later that rollout began reaching the users of the said device over-the-air. The OTA weighed approximately 933.8 MB, bringing in a plethora of changes and new features to the devices. Android 8.1 Oreo for Nokia 6 offers some unique features. These include the regular features like automatic Google Dark theme, revamped settings, Bluetooth battery percentage, power saving navigation buttons and redesigned power menu for easier navigation. The update also includes the March 2018 security patches. 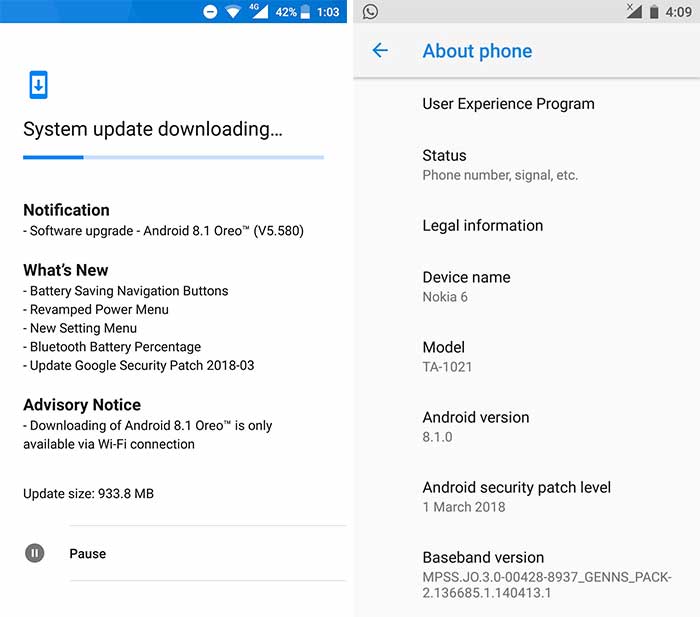 The update has started to roll out worldwide and will be reaching out to everybody gradually. To check if your phone has received the OTA notification, go to Settings -> System updates. In case you haven’t got it yet, you can follow the instructions below and manually install Nokia 6 Android 8.1 Oreo update right now.

Once you have fulfilled the requirements, you will be ready to install Nokia 6 Android 8.1 Oreo update.

Note that the Nokia 6 Android 8.1 OTA packages are incremental in nature. For example, in order to install the December Security Update, your Nokia 6 must be on the November Security Update. XDA senior member qwertysmerty captured the OTA URL and provided them on the original XDA thread. All the credits go to him!

You can also follow our guide on how to sideload OTA update ZIP using ADB.

Once your Nokia 6 boots, it shall be running the latest software running on Android 8.1 Oreo. Go ahead and explore all the new features. The update not only brings a version bump but also adds internal changes for better performance and battery life. It’s nice to see that new software also brings recent December 2018 security patches.

So this was our guide to download and install Nokia 6 Android 8.1 Oreo Update. If you have any questions regarding the procedure, then leave a comment below.