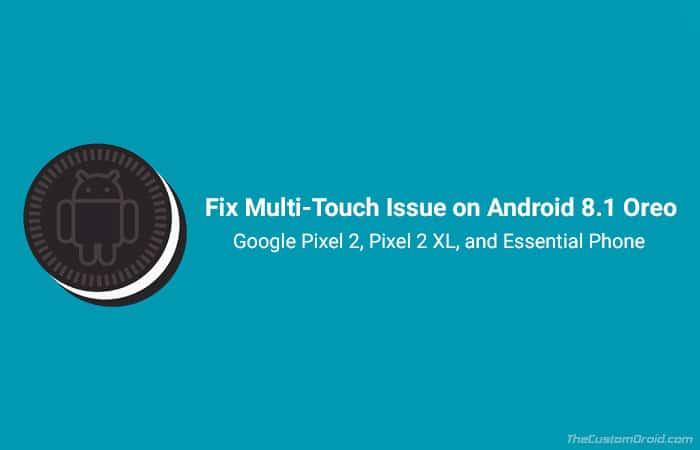 Are you facing multi-touch problems on your Google Pixel 2, Pixel 2 XL or Essential Phone? Then follow the steps in this guide to fix Android 8.1 Oreo multi-touch issue. Note that the solution will only work for devices with root using Magisk.

The Google Pixel 2 XL has been a pivot to a lot of issues ever since the launch. And as the time passed, we saw more and more of them affecting the device. The most recent one of which was the speaker distortion problem. Since the release of Android 8.1 Oreo in December 2017, users started reporting of another widely affecting problem related to the multi-touch. The bug isn’t device-related though and affects several devices running Android 8.1 Oreo. If you’re facing it too, then the steps below will help you fix Android 8.1 Oreo multi-touch issue using a Magisk module.

In the wake of December 2017, Google announced Android 8.1 Oreo for its own branded phones including the Google Pixel and Nexus series. While the software brought some interesting new features over 8.0, it also managed to bring a widespread bug that relates to the multi-touch usage on the smartphones. The issue, being related to the software didn’t stay limited to the Google devices and was also found on the Essential Phone (PH-1).

Before we head down to the steps and fix Android 8.1 Oreo Multi-Touch Issue, know what the problem exactly is and how it affects your phone’s functioning.

The reports started emerging from various online help groups and communities including Reddit and the Pixel user community. It wasn’t much later that the bug was submitted to Google Issue Tracker. According to the users, when you try and touch two different points on the screen (While playing FPS games like Dead Trigger 2, PUBG, etc) and move one of the fingers, the touch event will become erratic. You can also see the bug in action in the video below that was uploaded to YouTube. Courtesy of Bryan Candiliere.

Google took enough time to track down the bug and issued two commits (1 and 2) during mid-March. However, the fix wasn’t implemented in the latest April 2018 security patch. XDA senior member Freak07 took the advantage and compiled a Dirty Unicorns (custom ROM) build for his device, including the two commits. The test resulted positive and the issue was corrected. To help fellow users, he has now created a Magisk module that would help Magisk users to fix Android 8.1 Oreo multi-touch issue.

Users with the Google Pixel 2/Pixel 2 XL and Essential Phone running Android 8.1 Oreo can use this module to resolve the bug. Note that users with the OnePlus 5/5T running OxygenOS cannot use this. The problem pertains to Android P Developer Preview as well and the provided fix will work for it too.

Once your phone has booted, test the multi-touch functionality and it should be fixed now. It’s quite likely that Google will be including the commits in the next monthly update and hopefully in the Android P Dev Preview 2 as well. Until then, this solution would be your best bet to resolve the problem on your Google Pixel 2/Pixel 2 XL, and Essential Phone.

So this was our guide on how to fix Android 8.1 Oreo Multi-Touch issue. If you have any questions then kindly leave it in the comments section.