Trouble reaching out to your screen’s edge while your phone rests in one hand? This will solve it for you. Follow this guide to easily get One-Handed Mode on any Android device.

With increasing screen sizes, the reachability of our fingers starts to be a problem. Of course, right? Our fingers don’t grow along with the screen (ha!). If you have tried to hold phones like the Note 8, S8, or the Pixel 2 XL, you shall realize that it’s quite a discomfort to reach out to the status bar, while you are holding the phone in one hand. And that’s for an average sized hand, what about those who have a bit shorter fingers? Phones are not manufactured according to every customer’s hand measurements.

So how do we deal with this? By using a very specific feature that several OEMs have already implemented. If your phone doesn’t have this feature, like my Nexus 6P and OnePlus 5, then this guide will help you get One-Handed Mode on your device too, without root.

Get One-Handed Mode on Any Android Without Root

Manufacturers like Xiaomi, Samsung, Huawei, etc already have this functionality as a proprietary feature on their devices. Even Apple has it, known as iOS’ Reachability feature. And according to TheNextWeb, every smartphone should have it and I am completely in agreement.

But I guess Google is not, at least not yet. Google has already denied Huawei’s contribution to bringing One-Handed Mode to all Android devices. But that doesn’t stop us right and especially not the guys over at XDA. Those geniuses tend to work around anything, and this time, we are actually talking about the XDA team itself. Earlier yesterday, they have released an app that will help you get One-Handed Mode on your Android device right away.

XDA-Developers came up with the app in light of the new phones that are becoming taller. The taller phones are quite hard to operate with one hand and sometimes require you to overstretch over fingers to reach the status bar or top menu of an app. Unfortunately, not every app works with OHM, and that’s not something the app developers can control. Apart from this, it could be a very useful feature for those using taller or large-screen devices.

The app is operational on any Android device, rooted or non-rooted. However, setting it up on non-rooted devices requires access to a PC and ADB. This is because the app requires special permission (WRITE_SECURE_SETTINGS) that is normally given to system apps. If your phone is rooted, it is much simpler and can be set up directly from the device itself.

XDA’s One-Handed Mode could be installed on any Android phone or tablet that is running Android 4.0.3 or above (Uptill 8.1 Developer Preview). The app is FREE to install and test with the default settings. But you will have to make an in-app purchase if you wish to use the floating bubble feature.

Get One-Handed Mode – XDA App InterfaceThe payment is pretty nominal. It is $0.99 for this week and will be $1.99 after that! So now is the best time to install the app, try it, and make the purchase if you really want to get One-Handed Mode on your device.

If you wish to install the app manually, you can also grab the latest version from APKMirror.

Once you have downloaded and installed the ‘One-Handed Mode‘ app on your device, go to the app drawer and launch it. Now, the instructions will be a little different on rooted and non-rooted devices to get One-Handed Mode.

If your phone is rooted using Magisk or SuperSU, you can easily grant the required permissions to the app. 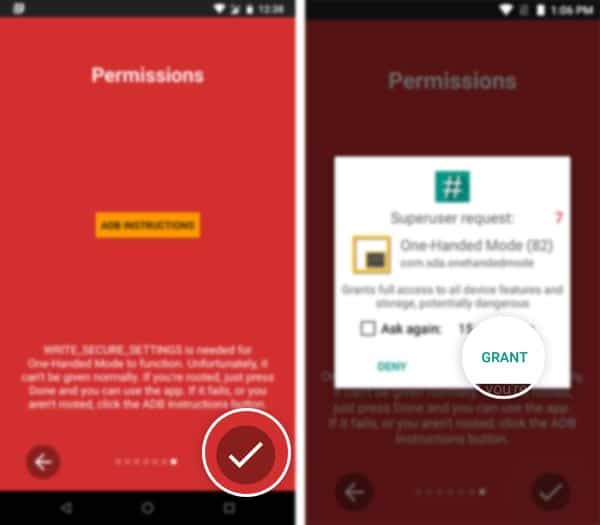 Once you open the app, go through the on-screen messages by swiping to the very right. Finally, on the ‘Permissions’ screen, tap on the Done (Check) icon on the bottom-right. As soon as you do it, the app will prompt for root permissions, so just tap on ‘GRANT’.

The app interface shall open for you now.

Now, if you have a non-rooted device, you can follow the instructions below to get One-Handed Mode set up on your phone.

First, make sure to enable USB debugging on your phone and set up ADB on your PC. We have an extensive guide, which shouldn’t take more than 5 minutes to set up. You should now have ADB access to your phone connected to the PC. Open the app and swipe right to the Permissions screen.

Now, enter the following command in the Command Prompt (CMD)/PowerShell/Terminal window on your Windows, Linux, or macOS PC. Remember, on Linux and macOS, you will need to add (./) just before every command mentioned below.

After you have done this, disconnect the phone and press on the rounded-check icon on the bottom-right of the app window.

You should now have access to the app options and settings.

Step 3: Use One-Handed Mode on Your Android

Now that you have been able to get One-Handed Mode, here’s how you can use it on your device.

In the app interface, you shall see that there are two options. First ‘Enable OHM Service’, which was enabled when you granted the permissions during step #2. Second ‘Enable Toggle Overlay’ which shall be greyed out. This is because it is a premium feature and requires you to pay a relatively small amount ($0.99 till Nov 3).

Now, if you choose to test drive the app for FREE, you can simply tap on the ‘OFF’ toggle on the bottom of the app. This will turn on One-Handed Mode on your device. You can try opening your favorite apps and see if they work well with this feature.

Further, if you like the app, you can make an in-app purchase by toggling ON THE ‘Enable Toggle Overlay’ option. Once done, you can switch it to ON and a circular toggle shall appear on the right edge of the screen. The toggle will stay persistent until you choose to turn it off.

Over to the app settings and different customization options that it offers. Tap on the cog (gear) icon on the top-right of the app window, and this is where all the app settings reside. Below, we have tried to explain each setting for your reference.

There you go! You have been able to get One-Handed Mode on your Android phone. Go ahead and try it for different apps on your device.

Note that the size settings are potentially dangerous and could break several apps like Google Photos or XDA Labs app itself.

We have a theory as to why and a potential workaround to force any app to work nicely, but implementing it will be complex – Mishaal Rahman, XDA

You could also share any bug reports or provide your input at onehandedmode@xda-developers.com.

Let us know your opinion on this app and how you would compare it to the feature on Huawei, Samsung, and Xiaomi devices. Kindly leave your feedback in the comments section below.