Samsung recently started rolling out Android Pie beta for its flagship lineup. According to Samsung, the One UI beta program is available for the users in China, France, Germany, India, Poland, South Korea, Spain, UK, and the USA. However, some of these regions have yet to actually get it. If you haven’t been able to update yet for some reason, then we have a guide on how to manually install One UI Beta on Samsung Galaxy S9/S9+. This could be easily done by sideloading the OTA package using stock recovery.

Android 9 Pie has been around the corner for a few months now. Several devices including the OnePlus 6, Nokia 7 Plus, Nokia 6.1/6.1 Plus, and the Essential Phone have already received the update. On the other hand, Samsung is lagging behind and has only yet started the Android Pie beta program for the S9/S9+. I believe the major reason for their delay is the on-going development of their new stock Android skin, which is now officially known as “One UI”.

With One UI, it feels like Samsung is finally ready to let go of their cluttered stock OS and focus on things that matter the most to the users. The design looks clean and has a lot of curves in the interface. We will have a lot of time to talk about the new Samsung skin in the coming months, as it evolves to the final version, which is predicted to be released in or around January 2019.

UPDATE: As of 11 December, One UI Beta 3 for Galaxy S9/S9+ (Exynos and Snapdragon) is available. Download links have been updated.

How to Opt for One UI Beta Program? 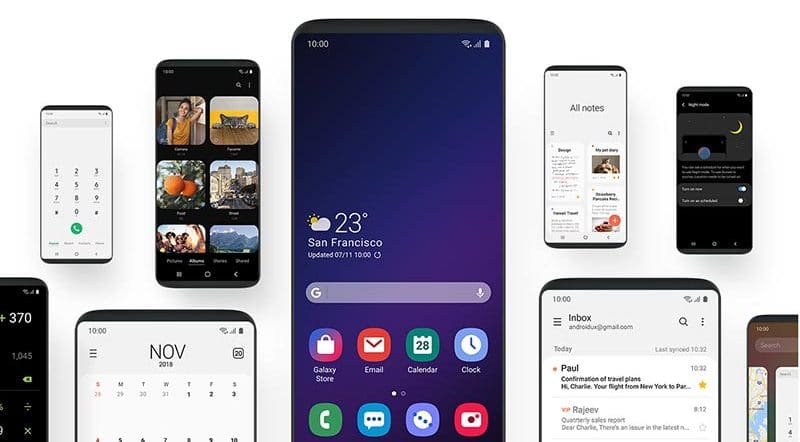 Opting for the official One UI Beta Program for Galaxy S9/S9+ is quite easy. The following steps will help you opt for the beta program and install it on your phone officially. However, if you are still not able to update or deliberately want to do it manually, then you can skip the steps and directly hop on to the instructions below to manually install One UI Beta on Samsung Galaxy S9/S9+.

We have been able to gather OTA packages of One UI Beta for the following model numbers. Please make sure to download the correct version for your device/model. Also note that since the OTA files are incremental, they will work in the following order: BRJ6/ARJ2 > Beta 1 > Beta 2 > Beta 2 Hotfix > Beta 3.

Thanks to XDA Senior Members suyash1629, geri005, and Forum Moderator murtaza02! Credit goes to them.

How to Install One UI Beta on Samsung Galaxy S9/S9+

Once you have made sure that your phone is on the required firmware, you can follow the steps below to sideload the OTA and manually install One UI Beta on Samsung Galaxy S9/S9+.

So you have just been able to install Android Pie-based One UI Beta on Samsung Galaxy S9/S9+. If you have any questions regarding the update process, leave a comment below.