Samsung has started testing Android Pie for the Galaxy Note 9 via the official beta program. According to which, users in China, France, Germany, India, Poland, South Korea, Spain, UK, and the USA can now opt for the Beta program and begin testing One UI Beta on their phones. If you haven’t been able to update yet for some reason, then we have a guide on how to manually install One UI Beta on Samsung Galaxy Note 9. Both the Exynos (N960F) and Snapdragon (N960U/U1) are supported. This could be easily done by sideloading the OTA package using stock recovery.

Android Pie is spreading quickly and is already available for several OEM devices. However, for Samsung devices, the company has only yet started beta testing the new Android version on selected devices including the Galaxy S9/S9+ and Note 9 which has only been added recently.

With Android Pie, Samsung has moved away to a new OEM skin, now known as “One UI”. The new software greatly improves over the predecessor “Samsung Experience” that was often blamed for being bloated with apps and features. With One UI, the OEM has moved its focus to two major things – (1) One-handed usage for taller displays and (2) a dark interface with a fancy Night Mode. Unlike SE, One UI brings features that are truly useful to the users and are not gimmicks that one would use and forget. The screenshots below will help you get a better idea of the visual changes. Thanks to Max Weinbach from XDA for the screenshots!

Initially, I too thought that Samsung is way behind the timeline as it always has been when it comes to software updates, despite the availability of Project Treble. However, if you ask me now, I think the complete overhaul of Samsung stock skin and development of One UI is the primary reason behind the delay. Which is acceptable, right?

So, while the development goes on, Samsung has released One UI to enthusiasts who want to voluntarily participate and provide feedback before the final release. Also, this is your chance to test out the new software and be familiar with the new features and changes that it brings.

How to Opt for One UI Beta Program? 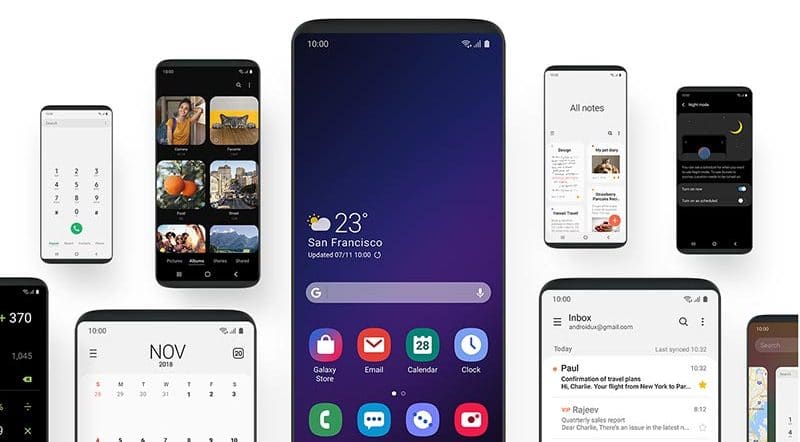 Opting for the official One UI Beta Program for Galaxy Note 9 is quite easy. The following steps will help you opt for the beta program and install it on your phone officially.

However, if you are still not able to update or deliberately want to do it manually, then you can skip the steps and directly hop on to the instructions below to manually install One UI Beta on Samsung Galaxy Note 9.

If you have opted for the beta program and have still not received the update, OR you want to get your hands dirty, then you can simply follow the instructions below to sideload the OTA and manually install One UI Beta on Galaxy Note 9.

We have been able to gather OTA packages of One UI Beta for the following model numbers. Please make sure to download the correct version for your device/model.

For Note 9 (N960F), the OTA files are incremental, they will work in the following order: ARK2 > Beta 1 > Beta 2 and so on. On the other hand, for the N960U/UI variant, you will always need to sideload the latest OTA package on ARJA/ARJ9 firmware.

The credits and our appreciations go to XDA senior members henklbr and geri005, Matriz_Usman (DroidModders), and Firmware Science for uploading and sharing the links.

How to Install One UI Beta on Samsung Galaxy Note 9

Once you have made sure that your phone is on the required firmware, you can follow the steps below to sideload the OTA and manually install One UI Beta on Samsung Galaxy Note 9.

So you have just been able to install Android Pie-based One UI Beta on Samsung Galaxy Note 9. If you have any questions regarding the update process, leave a comment below.