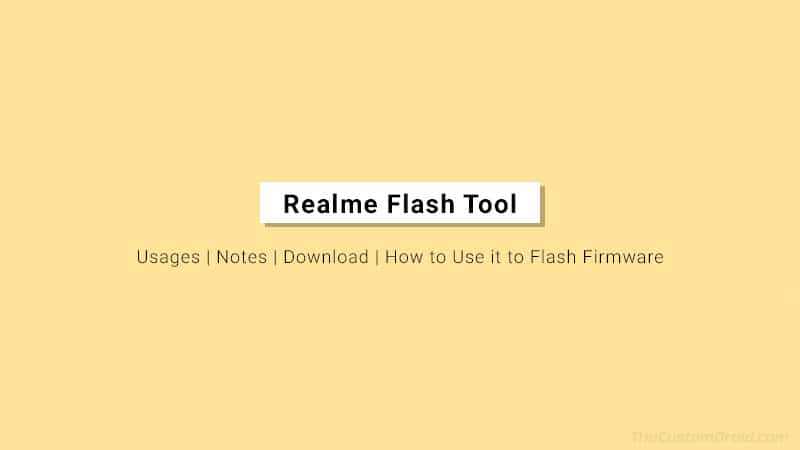 Realme has finally released their proprietary firmware flashing software for their phones. Through this page, you can download the official version of the Realme Flash Tool. Further, you will also learn how to use the tool to flash stock firmware (Realme UI OFP Package) on Realme devices to unbrick, update, or downgrade the software.

For the past 2 years, Realme smartphones have gained tremendous support for the custom development community. Well, majorly because the OEM is quick in releasing kernel source codes and also allows bootloader unlocking.

So, enthusiasts can play with their phone’s software and customize it to their own liking and needs. But things like installing TWRP, flashing custom ROMs/mods, or rooting via Magisk can some times land your phone into a soft-brick.

While Realme does provide its users with the stock firmware files through its official portal, But the files cannot be easily used by end-users to unbrick their phones. That’s because they are in the OZIP file format and one would need to properly decrypt and covert the OZIP firmware file to recovery-flashable ZIP, to be able to use it with custom recoveries like TWRP.

And so, without a proper flash tool, users would previously need to visit the customer service centers for merely unbricking their phone and restoring the stock firmware. But not anymore! With the availability of the official Realme Flash Tool, users can easily flash the stock Realme UI firmware to their devices.

What is Realme Flash Tool?

“Realme Flash Tool” is a Windows utility software that allows users to flash the stock firmware (Realme UI OFP Package) to their Realme smartphones. The tool was officially released by the manufacturer to help users install updates and/or repair/unbrick their phones in case of software bricks.

The flash tool supports the flashing of the official Realme UI OFP firmware packages over the Fastboot interface. Its graphical user interface holds a lot of similarity to Xiaomi’s Mi Flash Tool.

For a Realme smartphone owner, this tool can be used for a lot of different purposes. Below are some of the most common uses.

Before you head any further, take a look at some important information about this Flash Tool listed below.

Following is the list of Realme devices supported by the Realme Flash Tool:

As noted by the company, support for more devices will be added soon, and so we will update and maintain this list accordingly.

Click on the link below to download the latest version of the Realme Flash Tool. This has been provided directly by the official community.

This tool is a portable program, which means that it doesn’t need any installation. You can just download and run it on any Windows computer.

How to Use Realme Flash Tool to flash Stock Firmware?

The Realme Flash Tool flashes firmware on phones over the Fastboot interface. For the same reason, it is necessary to have your phone’s bootloader unlocked.

If you have done this already, you may skip to the next step. If not, then follow the bootloader unlocking guide for your Realme phone linked below. Note that unlocking the bootloader will erase all the data on your phone, so take a backup beforehand.

Step 2: Boot the phone into Fastboot Mode and Connect it to your PC

The second step is to boot your Realme smartphone into Fastboot Mode. The easiest and most direct way to get this done is to first power off the phone, and then press and hold the Volume Up and Power keys together. 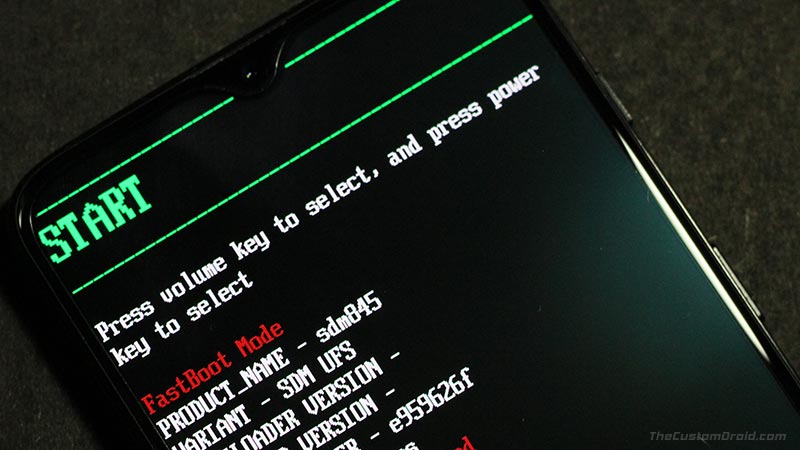 Once your phone is in Fastboot Mode, connect it to your PC via a USB cable.

Step 3: Download the Realme Flash Tool on your PC & Launch it

Now, download the latest version of the Realme Flash Tool and then extract the contents of the downloaded file (realme_Flash_Tool_V2.zip) on your PC. Like we mentioned earlier, the tool doesn’t need any installation and is a portable program.

So, open the extracted folder and double-click on the “realme flash.exe” executable file to launch the Realme Flash Tool on your PC.

Now, click on the “Loading device” button in the flash tool. When you do this, the tool should automatically recognize your Realme device over the fastboot interface and display its unique identifier (ID) under the device column (as shown in the figure below). 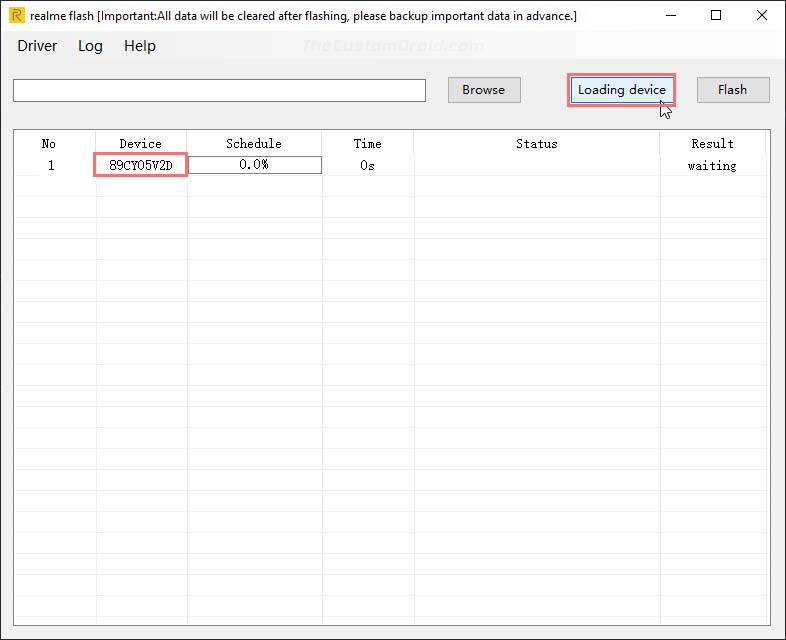 In some cases, the flash tool may also the “Device not recognized, please check your phone!” error message. It indicates that the proper USB drivers are either missing or not installed properly on your PC. And in such a case, you need to manually install the USB drivers for your Realme phone and the tool facilitates an option for the same.

To install the USB drivers, click on the “Driver” tab in the Realme Flash Tool and click on “Install”. Once the driver installation finishes, reboot your PC and try again. 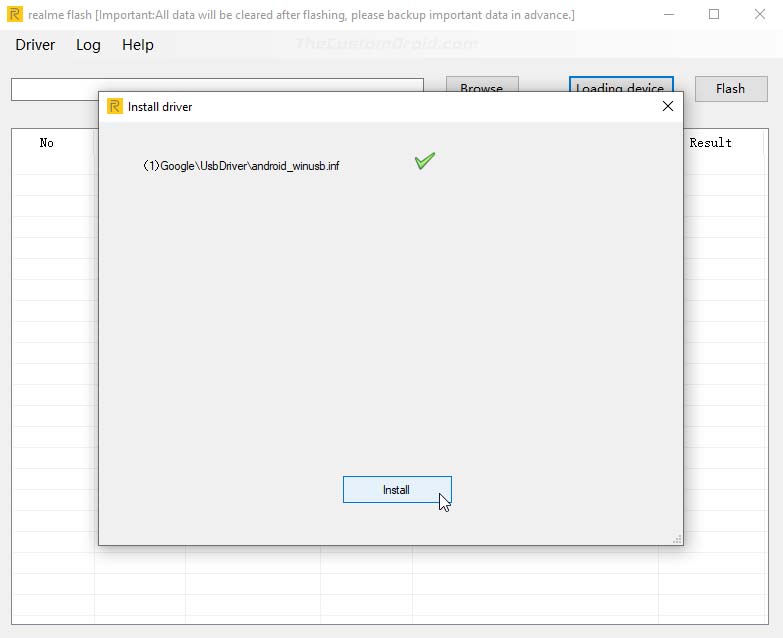 With an unlocked bootloader and proper fastboot connection, your Realme device is ready for flashing!

So, download the stock firmware (Realme UI OFP package) for your phone from the table below. Currently, OFP packages are only available for the Realme 3, Realme 3i, Realme X, Realme X2, Realme X2 Pro, and Realme X50 Pro.

Realme has stated that “we will release for more Realme smartphones in the future”. Once the OFP packages for other devices are released, we will be updating this post.

You can now flash the OFP Package to your Realme device using the Flash Tool. To do this, click on the ‘Browse’ button in the tool’s GUI and select the OFP firmware package you downloaded to your PC during the previous step.

Once the file has been successfully loaded in the tool, click the “Flash” button to initiate the flash. You should now see a prompt on the PC’s screen to confirm flashing, so click on “Confirm” to finally flash the stock firmware on your Realme device. 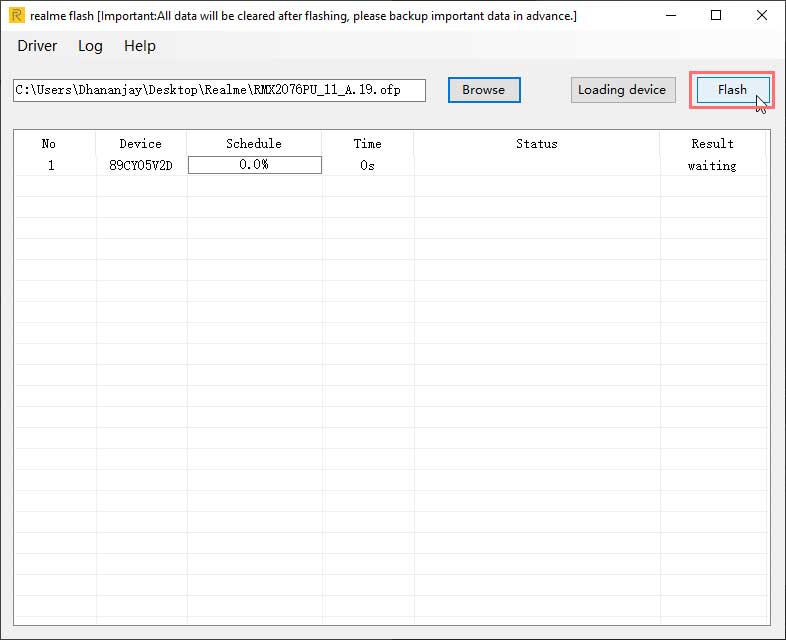 The flashing process could take a minute or more to finish, depending upon the firmware’s filesize and device. During this time, the progress will be shown under the “Schedule” column. Once finished, you should see the “Flashing completed” message on the screen and your Realme device will automatically reboot into the OS you just flashed. 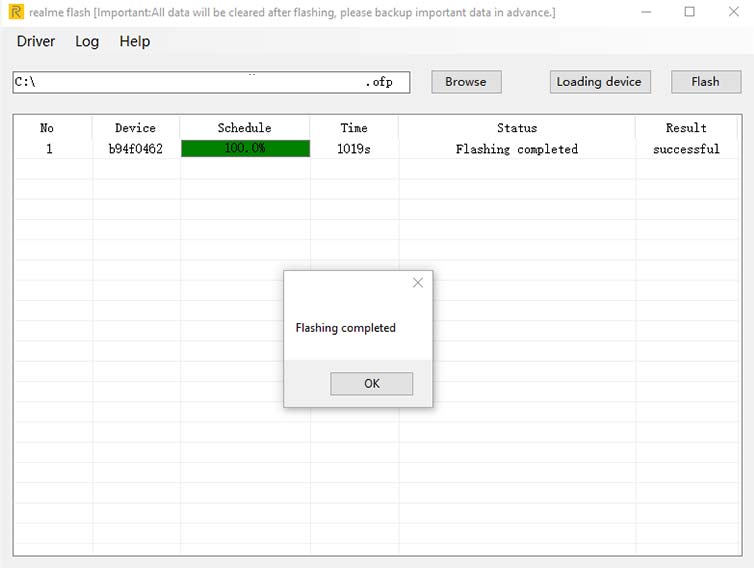 So, you have just downloaded the Realme Flash Tool and learned how to use it to flash stock firmware on Realme devices over fastboot mode. This should have allowed you to unbrick your phone if it was bricked, or manually upgrade/downgrade the Realme UI version.

If you have any questions about this newly-released flash tool or its usage or feel stuck anywhere while performing the instructions in this guide, then feel free to ask us.