Through this guide, you will learn how to unlock the bootloader on Realme X50 Pro (5G) using the official Unlock Tool (In-Depth Test) and fastboot commands. Further, we have also provided the instructions on how to relock the bootloader should you want to.

Realme has managed to capture a good portion of the smartphone market by offering its powerful phones at affordable price resolution. And it doesn’t stop there. The company has backed the custom development community by sending out phones to developers in the past. Plus it also provides an official way for bootloader unlocking for those who wish to play around with the software.

An unlocked bootloader is mandatory if you want to flash custom ROMs, install a custom recovery such as TWRP, or root your phone via Magisk.

When it comes down to Realme phones, the bootloader can easily be unlocked through fastboot. However, there’s an additional step that needs to be performed before that, which is to use the official Unlock Tool (Known as “In-Depth Test”) provided by Realme, to validate the bootloader. It is only after the bootloader is validated that you can finally unlock the bootloader on your Realme X50 Pro.

An unlocked bootloader will certainly give you more freedom and control over your phone’s software, but it also comes with some risks. So before you head down to the instructions, make sure to read the information listed below.

For your convenience and to provide a better understanding of the complete bootloader unlocking process, we have split the instructions into four (4) major steps below. So, let’s begin!

Step 1: Turn ON the ‘OEM Unlock’ Switch on your phone

The first step of the process is to turn ON the ‘OEM unlock’ toggle/switch on your Realme X50 Pro. To do this, go to “Settings” > “About phone” and continuously tap on the “Version” section for seven (7) times until you see the “You are now in Developer Mode!” message on the screen. By doing this, you should have enabled the hidden ‘Developer options’ menu.

Now, go to “Settings” > “Additional Settings” > “Developer options” on your phone and turn ON the “OEM Unlock” switch.

Now the second step is to validate the bootloader of your Realme X50 Pro for unlocking it. So, download the official Unlock Tool ( DeepTesting_X 50pro.apk; Extraction code: “l7n3”) and install the downloaded APK on your phone. 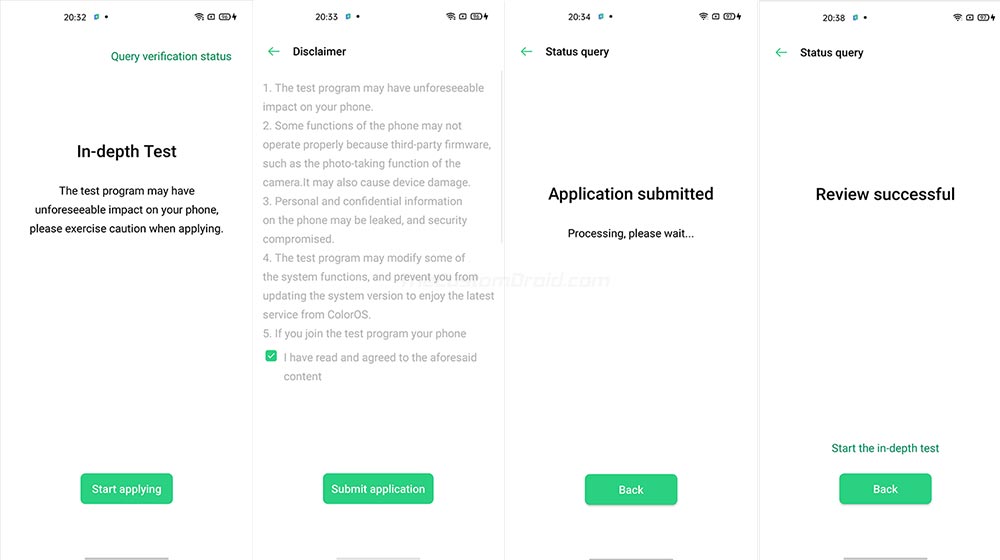 Once installed, launch the Unlock Tool application and tap on “Start Applying”. Then go through the Disclaimer shown on the screen, check the “I have I have read and agreed to the aforesaid content” and select “Submit application”.

Your application for bootloader unlocking will be sent and processed by the Realme servers. After about 15 minutes, the Unlock Tool will show the “Review Successful” message.

At this point, your bootloader unlocking request has been approved by Realme. So, you can now begin unlocking the bootloader. To do this, select the “Begin In-Depth Test” option in the Unlock Tool app. After you do this, your Realme X50 Pro will automatically reboot into Fastboot Mode as shown in the figure below. 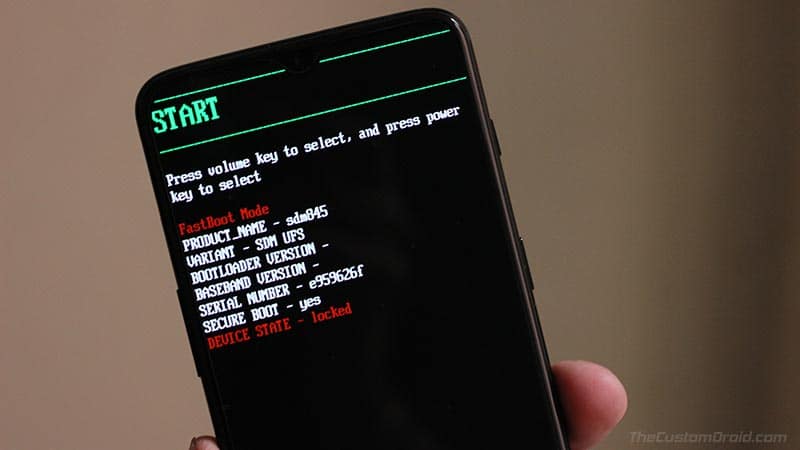 While your phone is in Fastboot Mode, connect it to the PC using a USB cable and then launch the command-line on your PC (Refer to pointer #5 of Prerequisites section).

Enter the command shown below to verify if your PC can communicate with your phone over the fastboot interface:

The command-line should return your phone’s unique ID along with the ‘fastboot’ message. If it doesn’t, then make sure that you have proper USB drivers installed or try using a different USB port on your PC.

Type in the following fastboot command in the command-line window and hit “Enter” to start the bootloader unlocking process:

As soon as you enter the command, a confirmation prompt will be displayed on the phone’s screen. Use the Volume keys to move the selector to “UNLOCK THE BOOTLOADER” and press the Power key to confirm and finally unlock the bootloader on your Realme X50 Pro. 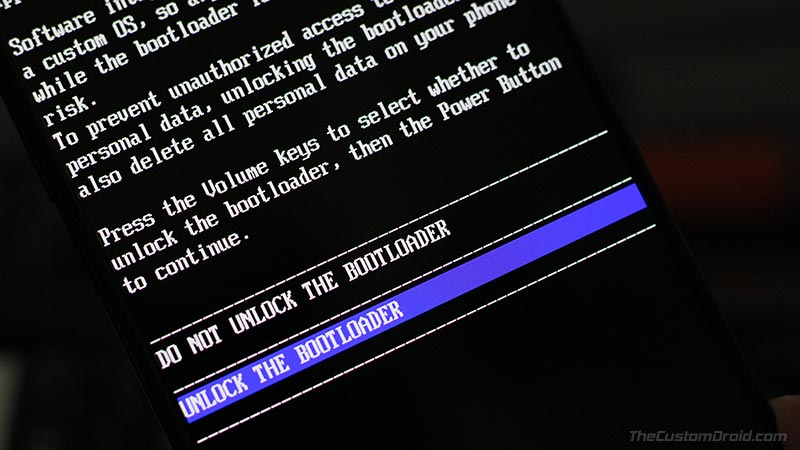 The phone will automatically reboot and all the data on it will be erased. Once it boots, you can re-setup the phone, log into your Google account, etc by following the on-screen instructions.

If any point you want to relock the bootloader because of security concerns or for fully restoring the device to its factory state, then you can do so by following the instructions below.

So, you have just learned how to unlock the bootloader on Realme X50 Pro. You may now go ahead and install TWRP recovery on your phone, and further use it flash Magisk for rooting. You can also keep an eye out on this XDA section for any custom ROMs that might be released for the X50 Pro.

If you are while performing the instructions or have any questions regarding bootloader unlocking, then feel free to ask us.