XDA Recognized Developer topjohnwu has recently announced another Beta update for Magisk, the universal systemless interface for Android devices. You can now download Magisk 16.7 Beta and Magisk Manager 5.8.3. The instructions below will also help newcomers to install Magisk and current users to easily update to the latest version.

If you have ever come around the word ‘Rooting’, there are strong chances that you have heard about ‘Magisk‘. It is basically a complete interface that not only offers a root solution for Android devices, but also allows the user to hide root from certain apps, and further provide the ability to easily inject additional features into the OS. Magisk is developed and maintained by XDA Recognized Developer topjohnwu.

Since the last update, which was about 2 months ago, the developer has finally released a new and improved build on July 7, 2018. Magisk 16.6 Beta aims at adding support for Treble-enabled devices and also fixes the mysterious root loss issue that has affected several phones. Below, you will be able to download Magisk 16.7 Beta and Magisk Manager 5.8.3 and also find the instructions on how to install/update it right now. 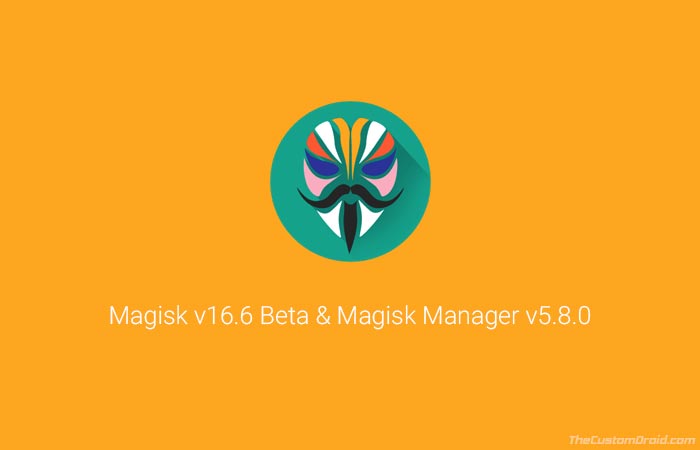 The latest version of Magisk is now finally available after almost 2 months of wait time, and we would like to tell you that ‘It was worth it!’. The developer (topjohnwu) was recently busy attending his military training. And despite all the engagements, he was still able to jump into the development and made some huge improvements to your favorite root solution.

Before you head over to download Magisk 16.7 Beta and Magisk Manager 5.8.3, let us learn more about the changes and new features in the said version.

The new build was announced over at John Wu’s Twitter account and the release notes were published at the official XDA thread. First and foremost, we would like to highlight the versioning. The developer has intentionally skipped version 16.5 since there were several major changes since the last release, that is version 16.4 Beta.

Hotfix Magisk v16.7 (1671) and Magisk Manager v5.8.3 is pushed to the public. Fix boot to fastboot on OP5/5T and detect ramdisk partitions on old Huawei devices.

With Magisk 16.6 Beta, the developer has highlighted two major changes/improvements, along with several other minor ones. The first is better support for Generic System Images (GSI) on Treble-enabled devices. In detail – Magisk relies on files that are stored in the /data partition of the device. So while a user switches to a different GSI and performs a factory reset, then he/she would need to re-install Magisk to gain root. In Magisk 16.6 Beta, a stub Magisk Manager APK is embedded in magiskinit. So, after a reset, if it detects that there is no Magisk Manager, then it will automatically inject the APK and host a full working Magisk environment for root.

Another major improvement that topjohnwu strained on was the abnormal root loss issue. According to him, the cause for this problem was the presence of multiple Zygote servers, which was not handled by MagiskHide and thus created the issue. The problem also affected the Magisk daemon and made it crash. To overcome this, the developer has added a new log monitoring daemon ‘magisklogd’, which works in hands with ‘magiskd’. He confirms that the internal testers who faced these crashes are no longer tackling them with Magisk 16.6 Beta.

Apart from the 2 major changes noted above, there are several additional improvements, as listed in the release notes and mentioned below.

It sure seems that the developer has utilized the given time to make several new and huge improvements. We appreciate him for his hard work and his contribution to the Android rooting community. Now that you know all about the changes, proceed down below to download Magisk 16.7 Beta and Magisk Manager 5.8.3 APK right now.

The Beta version has been provided as a flashable ZIP, that could be installed via TWRP or RedWolf Recovery Project. The Magisk Manager APK is also provided should you wish to update it manually.

If you’re new to the scene, then do not worry because you can easily install Magisk on your Android device to root it. Now, there are two direct methods to do this, either – with TWRP recovery or without. The former allows the user to flash the Magisk 16.7 Beta ZIP using TWRP recovery. On the other hand, the latter requires the user to patch the stock boot image and then flash it using fastboot.

In our own experience, the second method could be a bit confusing for new users. That’s often because getting the stock boot image for current firmware installed on the phone might not be that easy for every OEM device. Before all, we strongly recommend you to take a full backup of all your data on the device. This shall prevent any data loss situation should any issue arise after the installation.

In case you already have the previous version installed, then you can simply update Magisk 16.7 Beta via the simple set of instructions below.

When the phone boots, it shall be running the latest Magisk 16.6 Beta with Magisk Manager 5.8.3 installed. You can go ahead and install root-enabled apps, use mods like ViPER4Android/Dolby Atmos, hide root from apps like Pokemon Go, and install Magisk Modules to enable extra features on your phone. We highly value the efforts of topjohnwu for making it possible for enthusiasts like customization to a whole new level.

So, you have just been able to download Magisk 16.7 Beta and install/update it. If you have any questions, please leave them down in the comments.