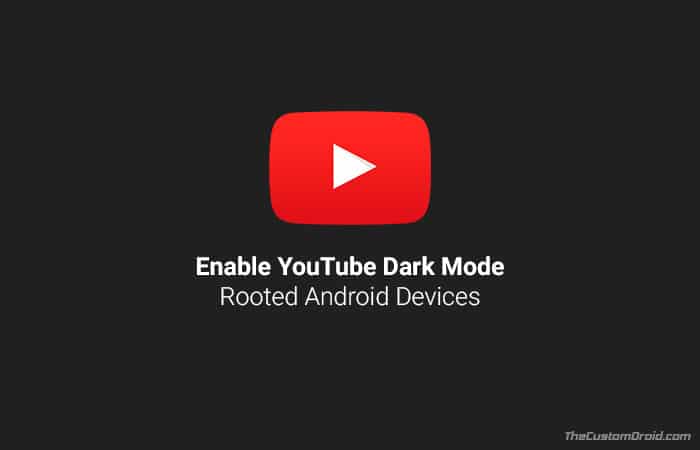 You can now get Dark Theme on YouTube Android app using a simple trick right now. In this article, we will show you how to enable YouTube Dark Mode on Android devices without root or modified APKs.

YouTube is a video sharing platform that is famous among the users, and also their go-to location for finding any sorts of videos. It is evidently one of the most renowned streaming services over the internet. Using YouTube on Android is fairly easy by operating the official YouTube app. It provides almost all basic to advanced features, so you can do almost everything that the standard desktop version offers. However, there is something that you still couldn’t do (Not yet at least). Google has already implemented a new feature to the desktop version, known as “Dark Mode“. Enabling which would switch the UI from light to dark theme.

APK teardown from Android Police indicated that Google is already working on the implementing the same feature to the mobile app. The feature is already rolling out to the users in stages, but it might take some time before everyone has it. If you’re not keen on waiting, then you can now easily enable YouTube Dark Mode on Android devices.

YouTube has both a website version and Application version for mobile devices. The dark theme on YouTube is the customization that many of the users were wishing for. This will provide a new look for the widely used video content platform. The new feature has already rolled out to YouTube for iOS. For now, Android users would have to wait until the final call is made. It was quite sad to see that Google didn’t roll out this features to Android first, considering the fact that they own the operating system. This led down many Android enthusiasts. But a simple solution to enable YouTube Dark Mode on Android was quickly found out by the passionate developers at XDA.

XDA’s Chief Editor Mishaal Rahman was able to enable Dark Theme on YouTube by modifying the youtube.xml preferences file located in /data/data/com.google.android.youtube. Unlike our previous method, we can now use the inbuilt ADB backup method to restore the modified youtube.xml file via ADB. If you are a fan of the new dark theme, then we have got you covered in this post.

Dark Mode on YouTube has its advantages as well. For instance, it will cause less strain on the eyes, especially when using in low-light environments. Somewhat similar to Night mode in phones and other apps. Go through the list of requirements before you head over to the steps and enable YouTube Dark Mode on Android.

Once you have fulfilled the requirements, go ahead and enable YouTube Dark Mode on Android using the steps below.

Simply open the YouTube app on your device. You will see that the bright white background in the app is replaced by the dark theme. It is not pure black as OLED users might have wished for. The dark theme available on the YouTube website has created a wave. This made a lot of users requesting the developers for a dark theme on the mobile platform as well.

To conclude, it is a good sign from the YouTube developers since they respond to the users’ wishes and update their preferences with respect to the customer demands. We hope that you will find this post useful to enable YouTube dark mode on Android. For queries drop a comment below.