Are you facing the missing OEM unlock issue on your Samsung Galaxy device? That’s because your phone has entered the Prenormal RMM/KG state. However, if you’d like to bypass it, then you can follow the instructions below and fix missing OEM unlock toggle on Samsung Galaxy devices. These include the Galaxy S8/S8+, Galaxy S9/S9+, Galaxy Note 8, Galaxy Note 9 and more. But before you get to the steps, take a look at the information below to know what RMM (KG) state actually is, how it affects the OEM unlock option, and how to turn it on again.

What is Prenormal RMM/KG State?

RMM (abbreviated for “Remote Mobile Manager”) or KG (abbreviated for “KNOX Guard“) state is a security functionality introduced to aid tighter theft protection by Samsung in Android Oreo. After the user finishes the Setup Wizard, the “RMM state“/”KG State” turns from ‘Normal‘ to ‘Prenormal‘ for a period of 7 days (168 hours). After the stated period a query is sent to Samsung, and if the phone is clean, the state will turn back to normal.

So, what does the RMM state have to do with OEM Unlock? – During the Prenormal RMM or KG state, the system automatically disables the OEM unlock toggle intentionally. The toggle is disabled to prevent flashing of any custom binaries like firmware, custom recoveries like TWRP, root packages, etc. 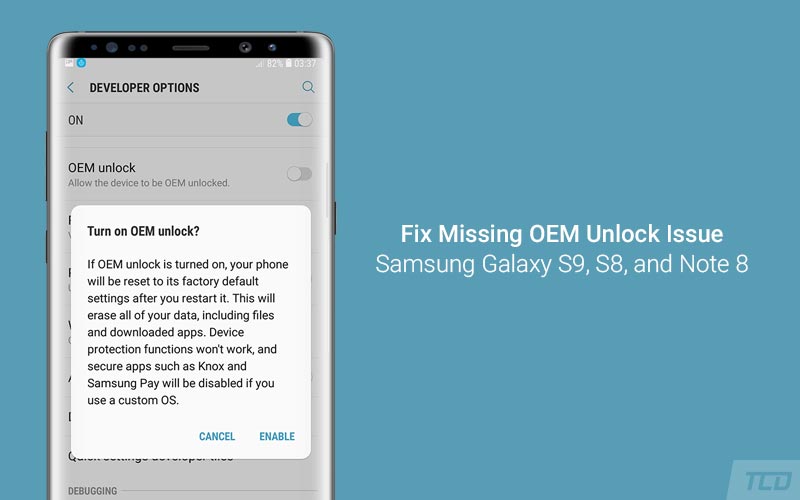 If you’re going to install TWRP recovery or root your phone, you will first need to turn ON the ‘OEM unlock’ toggle in Developer options. But since the toggle would be missing (Actually ‘disabled’) in Prenormal RMM/KG state, you would be forced to wait for a 7 days period. Thanks to XDA member altai1963 you can easily fix missing OEM unlock toggle on Samsung Galaxy devices including the S9, S8, Note 8, and Note 9.

One of our readers, Bill Bobbington was able to fix the missing OEM unlock toggle on his Galaxy Tab S3 (SM-T820). Please make sure that you go through his comment and let us know if it works for you. Thanks Bill! One of our readers – Sean Robertson has confirmed that this method works.

According to one of our our readers (PADDY186), flashing a compatible combination firmware on your device, then factory resetting it, and flashing the stock firmware again could allow you enable the OEM Unlock toggle. He has tested this twice on his Galaxy Note 9. Make sure to go through his comment.

According to one our readers (Username: Tonga; See his comment in the comments section), after completing all the steps in this guide, go to Settings > General Management > Date and Time and turn ON the ‘Automatic date and time’ option. Once done, revisit the ‘Developer options’ and see if the OEM unlock toggle has appeared again or not.

If this trick works for you, then please do share your phone’s model and software version with us. This will help other users who’re looking forward to fixing the Missing OEM Unlock problem.

The method below has stopped working on the newer firmware released in or after August 2018. In most situations, your device will be forcibly locked and the OEM Unlock toggle will be missing. Ensure that you insert a SIM card, connect to your network, and NOT REBOOT your Galaxy device for straight 7 Days (168 Hours).

Once the RMM State turns back to ‘Normal’, you’d be able to flash custom binaries like TWRP. However, before flashing, make sure to read our article on how to Prevent Prenormal RMM State and avoid your device from being locked again.

If your device is not mentioned above, you can still give the instructions a try. If it works, make sure to let us know so that we can add the device to the list.

After your phone boots, the OEM unlock toggle shall appear under ‘Developer options’.

To further avoid the RMM state from locking your device again, you can simply flash ‘RMM_Bypass_v3_corsicanu.zip‘ file (Credits: XDA Senior Member BlackMesa123 and corsicanu) right after flashing TWRP on your Samsung Galaxy device.

So there you go! You have just been able to bypass the Prenormal RMM state and fix missing OEM Unlock toggle on your Samsung Galaxy S9/S9+/S8/S8+ and Note 8. If you have any questions, please let us know through the comments.

Now that you have successfully enabled ‘OEM unlock’, you can go ahead and follow one of the tutorials linked below to root your corresponding Samsung Galaxy device.