Updated on 19 June 2019: RMM State is now known as “KG State” on Samsung Galaxy devices running Android Pie, where “KG” stands for “KnoxGuard”. Thanks to XDA Developer corsicanu, we now have KG/RMM Bypass v3 zip that will help you prevent your device running Android Pie or Oreo from getting locked again.

What is Prenormal KG/RMM State and How it Affects Custom Flashing?

In a nutshell, the problem arises when the KG/RMM State is set to ‘Prenormal’. In that case, it will prevent you from flashing custom binaries like TWRP or carrying out any other sort of modifications to the phone’s software.

There are three simple ways to check if your device is locked and has Prenormal KG/RMM State:

You can Bypass Prenormal KG/RMM State and Prevent Locking Again

A few months ago, we covered a simple trick to fix the Missing OEM Unlock Toggle. However, the method didn’t work for long and was patched by Samsung. So, it’s highly likely that you will be forced to experience the 7 days lock period for the first time. So, if the OEM Unlock toggle is missing on your Samsung Galaxy, you must have a SIM card inserted, connected to the network, and must not reboot your phone for straight 7 Days (168 Hours).

But what after the OEM Unlock toggle reappears? It doesn’t mean that your device won’t get locked again. A simple example of this situation is when you flash TWRP and reboot directly into the system (OS). In that case, your phone will be locked again and prevent you further from rooting or flashing a kernel/custom ROM.

So, to prevent Prenormal KG/RMM State on Samsung Galaxy devices, you must flash the KG/RMM State Bypass v3 zip file provided by XDA Recognized Developer corsicanu. The patch was initially developed by XDA Senior Member BlackMesa123, so a huge thanks to him.

As described by them in their respective detailed posts (1 & 2), the Prenormal KG/RMM State is triggered by a string in the services.jar file and an app (KnoxGuard.apk/RLC.apk) that comes pre-installed on the phone. The flashable zip file he provided will help you bypass Prenormal KG/RMM State and prevent your phone from getting locked again. Easy, right? 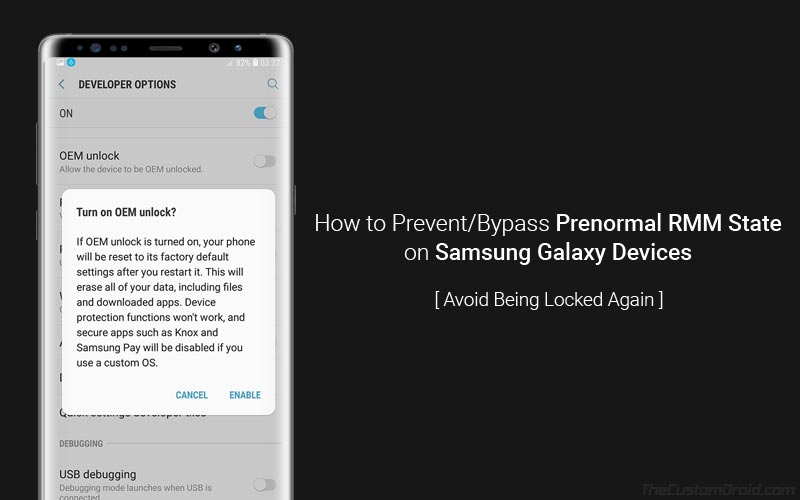 The new KG/RMM State security feature was rolled out to the current users via software updates initially. On the other hand, all new devices released in 2018 and further come with this new security feature enabled. Irrespective of the Samsung device you own or when it was purchased, this method should work if it suffers from the stated issue.

The method below will help you Prevent Prernormal KG/RMM State on the following Samsung Galaxy devices:

If you observe that your Galaxy device is affected by this issue, then please let us know, we’d update this list.

Once you have fulfilled the requirements, you can follow the instructions below to prevent Prenormal KG/RMM State on Samsung Galaxy devices. We will presume that you have already flashed TWRP and booted your phone directly into TWRP.

How to Bypass Prenormal KG/RMM State on Samsung Galaxy Devices?

Once the flashing process finishes, you can tap on the ‘Reboot System’ button. Your device should boot into the OS without being locked again and the ‘KG State’ or ‘RMM State’ should be shown as ‘Checking’ or ‘Normal’, respectively in Download Mode.

Note that you will need to repeat this process and install the KG/RMM State Bypass zip every time you flash a ROM. You can further root your phone as well, using the latest version of Magisk. Although we guide you to flash this bypass zip in our regular rooting tutorials, we still felt the need to create a dedicated post for it.

So, you have just learned how to Bypass Prenormal KG/RMM State on Samsung Galaxy devices and avoid being locked. We can end this post without thanking XDA developers corsicanu and BlackMesa123! If you have any questions regarding the process detailed here, please feel free to leave a comment below.