When it comes to smartphones, the Razer Phone stands out in a crowd due to its distinctive gaming drift. As new devices are released, users expect them to be updated with the latest software on time when they get their hands on it. The Razer Phone came with the Android 7.1.1 Nougat, that brought it down a notch. The company picked that point correctly and initiated to make it as good as possible. The device is packed with substantial hardware along with the software. It was back in March when the manufacturer announced Android 8.1 Oreo developer preview for the device. At that time, the OEM also promised to release the official update somewhere in April, to which it successfully stood on. The OTA is rolling out in stages, which means it could take some time before it reaches each and every device. In such a case, you can choose to manually install Razer Phone Android 8.1 Oreo update.

Razer Phone has indeed been a trendsetter for the Android market and for other manufacturers to follow up in the same direction. We recently saw the Black Shark, which is Xiaomi’s take on the mobile gaming market.

The Razer Phone is powered by a Snapdragon 835 processor, 8 GB RAM, dual 12MP+12MP camera lens setup, a 5.7-inches IGZO IPS LCD display with 120 Hz refresh rate and wide color gamut. Even though the device was announced after the arrival of Android Oreo, it still came with AOSP-based Android 7.1.1 Nougat firmware, which was sort of a downfall at first. However, a few months later, back in March, the OEM announced the Android 8.1 Oreo developer preview for the device. Just like Essential, Razer also made a jump directly to 8.1, skipping 8.0 Oreo, which sounds pretty logical at this time.

Before you even head over to the steps to install Razer Phone Android 8.1 Oreo update, let us discuss some details about the changes that the new software brings.

As the device has entered into the Oreo community, it has its own benefits now. Which means, your Razer Phone will receive all the standard Oreo features like Autofill Framework, Notification Categories, Instant Apps, Picture-in-Picture mode and more.  There are several under-the-hood changes that you wouldn’t see in the official changelog. These include Project Treble support, Dolby Atmos app, new display profile, and February 2018 security patches. 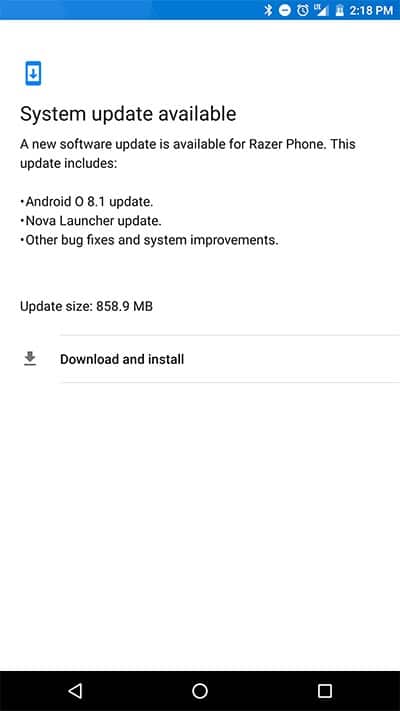 According to the official announcement, the rollout will occur in stages and could take up to 10 days to reach out to everybody. If you’re not the patient kind, you can simply follow the steps below to manually install Razer Phone Android 8.1 Oreo update by sideloading the OTA using stock recovery. Make sure to go to Settings > About Phone > System updates and check for the OTA notification.

Make sure to fulfill the requirements below before you read the instructions and install Razer Phone Android 8.1 Oreo update.

Again, thanks to XDA senior member Exelios for capturing the OTA link and sharing it with the public.

When your phone boots, it shall be running the latest Android 8.1 Oreo firmware. You can simply browse around and check out all the new Oreo-specific features like Picture-in-Picture mode, Autofill Framework, Adaptive Icons, and more. The only down part about this update is security patches from February 2018. Razer could have merged the latest April 2018 security patches instead, which would mean a more secure platform for the users.

So this was our guide on how to install Razer Phone Android 8.1 Oreo update by sideloading the OTA ZIP. If you have any questions regarding the process, leave a comment below.