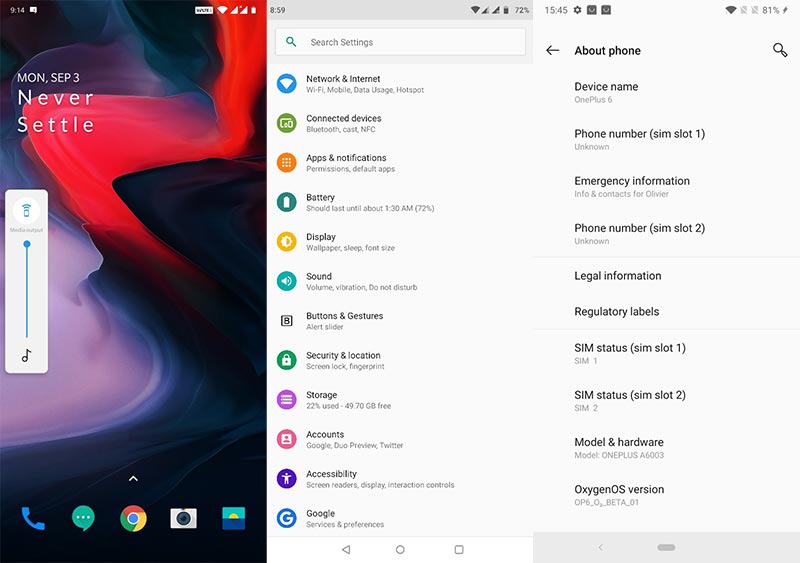 OnePlus 6 OxygenOS Open Beta 1 mostly concentrates on the Android Pie system upgrade. Also, other upgrades follow the software update as well. Here we have a look at the official changelog of the Oneplus 6 Open Beta 1.

There’s something else that hasn’t been mentioned in this changelog and this is the September 2018 security patches, even ahead of the Pixel devices.

This is a beta software, so it may have some bugs. The authorities from the OnePlus mention that Google Pay service is not working as of now and Play Store may show “device not certified by Google”. Some other may show glitches, but that’s it. These glitches can be overcome in upcoming updates.

Being the first Open Beta update, this will not be available via OTA and users will need to manually install it. To upgrade from Stable official version to Android P Beta version, download the ROM here. If you upgrading from Developer Preview version to Android P Beta version then you can download the specified ROM here. All instructions for upgrading your OnePlus 6 can be found here.

So, that’s it. If you want to have a bite of the Pie, then do not miss the OnePlus 6 OxygenOS Open Beta 1 update. However, since it’s the numero uno beta watch out for bugs and glitches.