The OnePlus 8T packs quite a powerful camera, with a quad-lens setup on the rear. This comprises the 48 MP primary wide-angle lens, a 16MP ultrawide lens, a 5 MP macro lens, and a 2 MP depth sensor, along with dual-LED flash. On the front is a 16 MP wide-angle selfie camera that’s capable of shooting some decent portraits.

Why would you want to use the Google Camera?

There’s no doubt that the specs for the camera hardware look quite impressive on paper, but the same couldn’t be said when it comes down to real-time camera usage. It’s not like the hardware isn’t powerful or capable, but the OnePlus camera app often lacks the ability to fully utilize the available hardware.

I feel that the photos captured with the stock camera app on the OnePlus 8T are processed with a punchy pre-applied filter effect. This makes the images sometimes provide excessive contrast and brightness, and often miss the details where they matter.

Personally, I prefer my photos to look as natural as possible and close to how my own eyes interpret the scene. And that’s when installing the Google Camera port (often referred to as “GCam Port” or “GCam Mod”) can help. It is nothing but a modded version of the official Google Camera app ported to work on non-Pixel devices, like the OnePlus 8T in this case.

Installing the Google Camera mod on the OnePlus 8T generally provides more neutral and realistic photos, and also gives a nice bump to the overall camera performance of the phone. Its application and benefits are not just limited to that. The GCam Port also allows you to use Google Pixel camera features like Astrophotography mode, Portrait mode, HDR+, Night Sight, Playground (AR Stickers), and more on your OnePlus phone.

Let’s take a look at some photos taken by the Google Camera Port on the OnePlus 8T. The images below illustrate a mix of scenes like landscape, portrait, low-light, and a couple of close-ups captured using corresponding modes like Night Sight, Astrophotography, Portrait, etc in the Google Camera app.

These images were shared by Tefzors, Jouni Varjonen, Spikydoc, and Joaquin on the Telegram group and belong to their respective owners. So a huge thanks to them!

There’s no denying that the images are quite impressive. Google Camera on the OnePlus 8T incorporates the right amount of exposure, saturation, details/sharpness, and shadows. This makes them look more realistic and very close to what you’d see from your eyes.

This also doesn’t mean that the photos taken by the stock OnePlus camera app are essentially bad. It all depends on your taste and how you want your photos to look at the end.

If you prefer punchier photos with strong colors that probably wouldn’t need any post-filters, then the OnePlus camera app is quite good as well. But if you do prefer more realistic images (like me), then I am sure you’d be very happy with using the Google Camera.

There are a lot of developers who voluntarily port the Google Camera app on this website. While some of these are built specifically for a certain device, there are others that are more generic and work across different OEM devices.

So, while there are several ports that will work on the OnePlus 8T, but they might not be as stable or support every camera feature and give you the best results. And that’s why we came up with this post, to help you get the latest and most stable Google Camera port for your OnePlus 8T, without having to go through the trouble of trying and testing every other GCam port available out there.

At the time of publishing this post, the ports of Google Camera v8.1.101, v7.3.018, and v7.4.014 from developers Arnova8G2, Nikita, and Wichaya are the ones that are optimized for the OP8T and provide the best results. These have been thoroughly tested and according to the users on the Telegram group, these are the most stable GCam ports available for OnePlus 8T.

Information about these ports

Once you have gone through the info above, download the GCam Port APK and the corresponding XML config by using the links below.

First, download the APK file of the specific Google Camera port that you wish to install on your OnePlus 8T. If you have downloaded the APK to your computer, make sure to copy it over to your phone’s internal storage.

Next, open the File Manager application on your phone and navigate to the folder where the APK file was downloaded/transferred. Then tap on the APK file (e.g. ) to launch Android’s built-in package installer. Finally, press “Install” to install the GCam Port on your OnePlus 8T. Once the installation finishes, select “Done”. 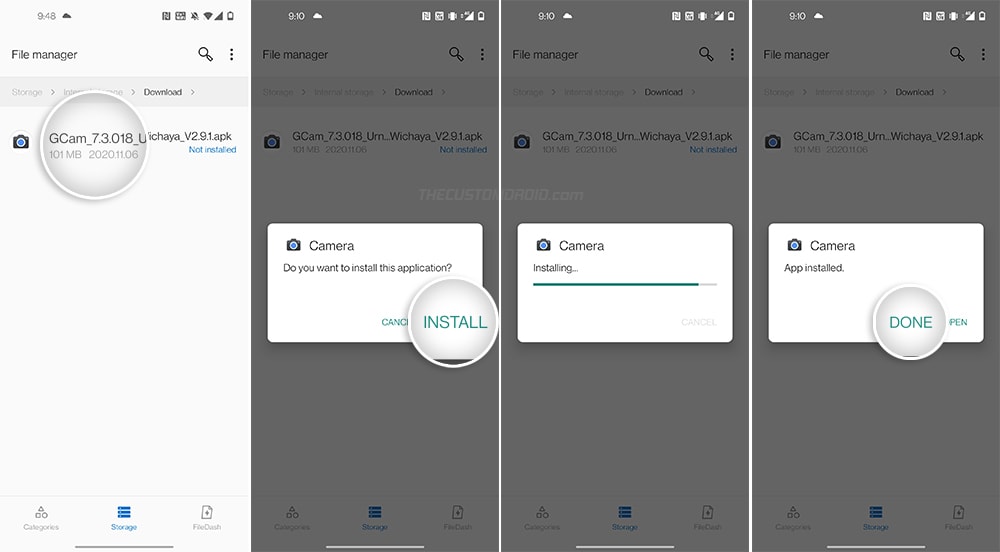 Note: When installing/updating the GCam port, make sure that you uninstall the previous version first and perform a fresh install. Ports by Wichaya and Urnyx05 using varying package name, so they could be installed alongside other ports.

Now that the Google Camera port is installed on your phone, you’re can import the configuration file for the best camera settings.

To do this, first, download the config file for the port you’re using. Then open the file manager, create a new folder in your phone’s internal storage and name it “GCam”. Next, create a new folder named “Configs7” inside the “GCam” folder. Copy the downloaded config XML file inside <internal storage>/GCam/Configs7/. The Google Camera app loads its configuration files from this location.

Note: If your downloaded GCam uses a different location to load XML files, make sure to create the folders accordingly and copy the XML file inside. 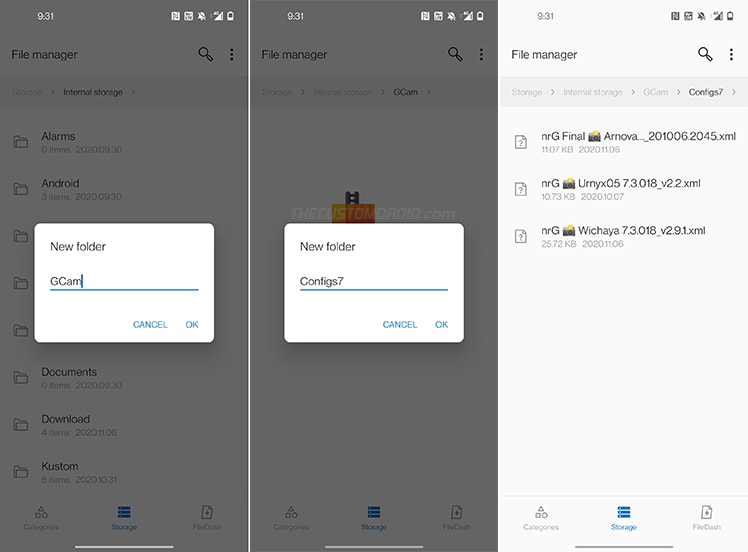 With the config file in place, go to the app drawer on your OnePlus 8T and launch the Google Camera app. If you’re launching the app for the first time, it will prompt you to grant the required permissions, so grant them.

Now to load the config file, double-tap on the area between the shutter button and the preview icon. The config loader window should now open up on your phone’s screen. Simply choose the config XML file that you want to import and press the “Restore” button. The camera app will automatically restart after the config file is loaded. 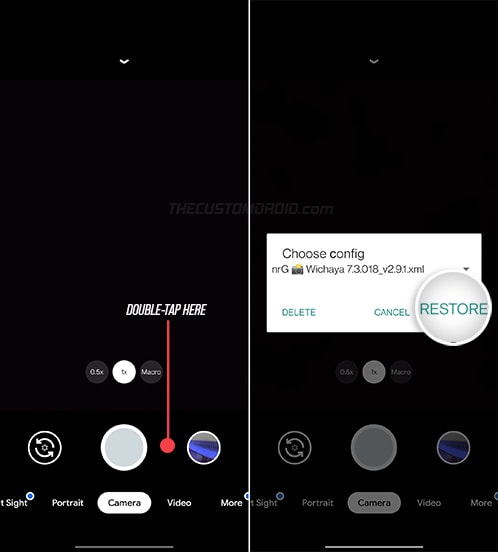 Step 3: Test out the new camera & tweak as you need

Now launch the camera app and start capturing photos/videos with the new Google Camera app on your OnePlus 8T.

There you go! You have just been able to download and install the Google Camera port on your OnePlus 8T. If you have got any questions regarding the installation or usage of the GCam port, feel free to ask. We will keep this page updated as newer versions of the ports are released.

How to Factory Reset the OnePlus 8T using 2 Different Ways

How to Enable Developer Options & USB Debugging on OnePlus 8T

Credits: The ports were provided by their respective developers on this website and on the OnePlus 8T’s Telegram group. A huge thanks to the developers and to the members of the Telegram group for collecting the ports in one place.