Through this post, you can download the latest and most stable Google Camera Ports for Redmi Note 8 Pro running MIUI 12 (Android 10) and MIUI 11 (Android Pie). Further, we will also guide you on how to install the GCam APK on the Redmi Note 8 Pro and load the config XML file for the best camera settings.

Xiaomi is quite popular with its entry-level phones, especially the Note series that offer some very powerful hardware specs at an affordable price. And the Redmi Note 8 Pro that was released by the company last year is no different. The phone is powered by an octa-core Mediatek Helio G90T chipset, supports up to 256 GB of UFS 2.1 storage, 8 GB RAM, and a 6.53 inches IPS LCD display with HDR.

When it comes to the camera department, the phone features a powerful AI quad-camera setup on the rear. A 64 MP primary lens, an 8 MP ultrawide lens, and 2 MP macro and depth sensors, respectively. Despite all the great camera hardware, the stock camera on the Redmi Note 8 Pro still fails to do complete justice when it comes to photo quality.

And that’s where the Google Camera Port (Also known as “GCam Port” or “GCam Mod“) comes into play. Installing Google Camera on your Redmi Note 8 Pro can significantly improve the overall camera quality and also allow you to use Pixel-specific camera features like Astrophotography mode, Portrait mode, Night Sight, HDR+, and much more. So, if you’re really looking forward to giving a nice boost to your phone’s camera experience, then you should give it a try. 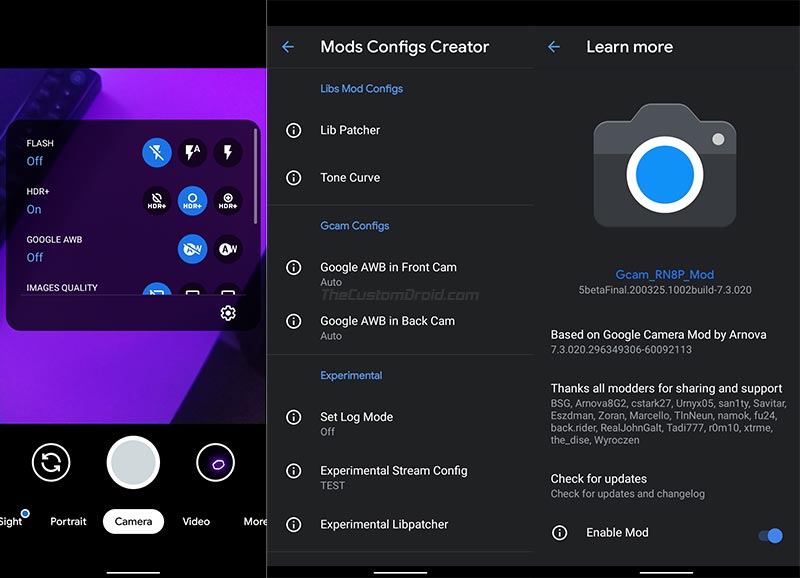 Google Camera ports are generally available for devices with Qualcomm chipset. However, the Note 8 Pro, despite running a MediaTek chipset has managed to receive tremendous support from the developers.

Popular GCam port developer Wyroczen has released ports of Google Camera 8.0, 7.4, 7.3, and 6.1 for the Redmi Note 8 Pro. His ports are considered among the best and most stable ones for daily use. Further, there are some other ports from developers like Wichaya and Nikita that have been tested and are known to be stable for the device.

Almost all major camera features, including Night Sight, Portrait Mode, Astrophotography Mode, etc are fully working in these ports. While all the provided ports are stable and considered the best, we’d recommend that you try and test every available port to decide which one works the best for you.

Below, you will find the links to download the GCam APK for the Redmi Note 8 Pro. These ports have been listed in decreasing order of the Google camera version, so the latest version is at the top, while the older version at the bottom of the downloads list. All of these ports support the Redmi Note 8 Pro running MIUI 12 (Android 10) and MIUI 11 (Android Pie).

The first working port of the latest Google Camera 8.0 app for the Note 8 Pro is in the Alpha stage. That is, it is being tested by the developer and contains bugs. It is also worth noting that this port will not work on MIUI, but only on certain AOSP-based custom ROMs.

Installing Google Camera on the Redmi Note 8 Pro is very easy. The best part is that this phone natively supports camera2 API out-of-the-box.

So, all you have to do is install the APK file on your phone, launch the camera app, and import the config file to load pre-defined camera settings to get the best results out-of-the-box. If you’re still not sure, follow the steps below.

Note: When updating/switching the GCam port, always make sure that you uninstall the existing version first and perform a fresh install. Ports by Wichaya and Urnyx05 use varying package names, so they could be installed alongside other ports.

Now, you can either explore the available settings in the camera app or use a config XML file. A config file allows you to load pre-defined camera settings within the GCam port for the best results.

To do this, first, download the config file corresponding to the port you have installed and copy it to /GCam/Configs7 folder for GCam 7+ ports or /GCam/Configs folder for GCam 6.x ports (Create the folders if not already present). Then open the camera app and tap on the empty space near the shutter button. Finally, select the config XML file and tap on the ‘Restore’ button. 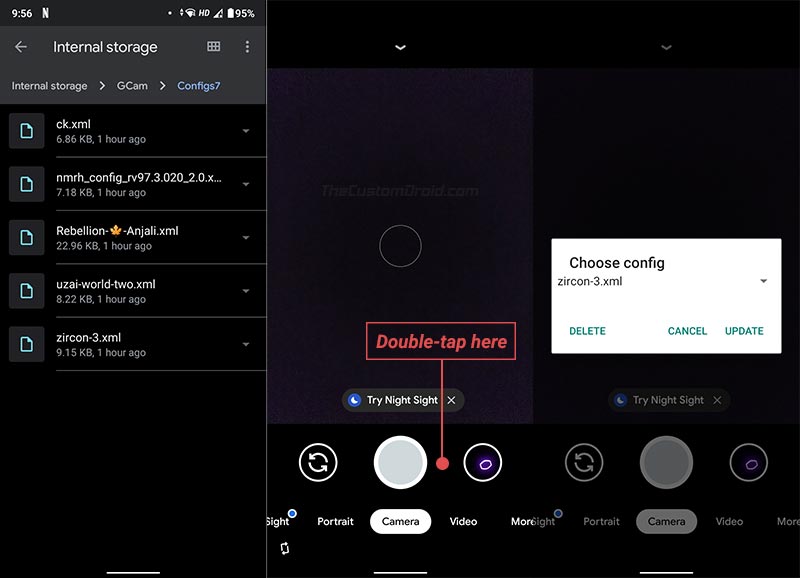 Step 3: Test the Camera and Tweak the Settings as You Need

That’s it! Now that you have the Google Camera app installed on your Redmi Note 8 Pro, go ahead and check out all the Pixel camera features like Night Sight, HDR+, Portrait Mode, and Astrophotography Mode.

Some of the ports and their configuration files were sourced from the Redmi Note 8 Pro Telegram group. A huge thanks to everybody there!