HMD Global recently announced Android Pie update for the Nokia 5. If you still haven’t got the OTA notification, then you can download and manually install Nokia 5 Android Pie OTA Update using this guide.

Up until now, several Nokia Android smartphones have been updated to Android 9 Pie, with the Nokia 8 and Nokia 8 Sirocco being the lastest. And now, HMD has released the update for the Nokia 5 too. The mid-range phone was released back in 2017 with Android 7.1.1 Nougat, and after about two years it is finally being upgraded to Android Pie. This might also be the last major OS upgrade for the phone, considering that the Nokia 5 has already experienced three major Android versions including Android Pie now.

Android Pie update for Nokia 5 started rolling out over-the-air more than a week ago and has already reached several users in various regions. But, if you have not yet received the OTA notification, then you can follow the instructions below to manually install Nokia 5 Android Pie update.

Like any other phone, Android Pie on Nokia 5 brings features including App Actions & Slices, Adaptive Battery and Brightness, new intuitive Gesture Navigation, and major overhaul to the user interface.

The latest Android Pie-based software comes as v6.18B and the OTA weighs 396.1 MB. The update brings July 2019 security patch, which is not the latest, but is still better than what most other competing devices have.

According to the OTA notification screenshot, the latest Nokia 5 Android Pie update brings the following changes:

Below are changelogs for the older updates, should you need to know what is or has been changed.

As we already mentioned, over-the-air (OTA) updates roll out in phases, which means there could be some time before you get the update. To force-check for the OTA notification, go to ‘Settings‘ → ‘System‘ → ‘System updates‘ on your phone. If you haven’t got it yet, then you can follow the instructions below to install Nokia 5 Android Pie OTA update manually. 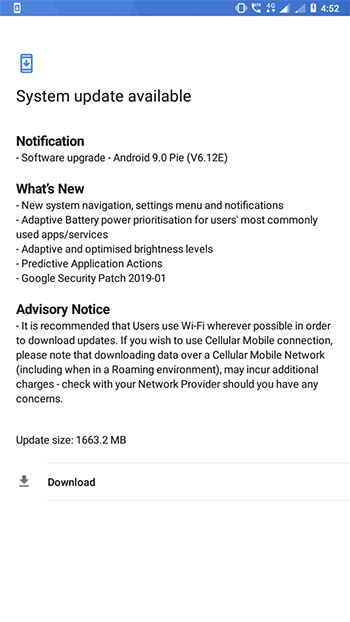 Below we have provided direct links to download all the Android Pie-based OTA packages for the Nokia 5.

The OTA packages were captured and shared by XDA member majason, so a huge thanks to him first.

Note: If you have received a more recent software update than the latest one provided above, then please consider capturing the URL of the OTA and share it with us. This would help a lot of our readers to manually update their Nokia 5.

The first Android Pie OTA for the Nokia 5 is a full OTA package and can be installed from any previous Nougat firmware.

However, after that, every OTA package provided below is an incremental OTA update. Which means, you will need first sideload the V6.12E OTA, followed by V6.16C, then V6.17D and so on.

Your Nokia 5 should reboot into the upgraded Android Pie OS with latest July 2019 security patches. Go ahead and enjoy all the latest features on your phone now.

There’s no denying that HMD Global has made a good effort in pushing regular monthly and major OS updates to its devices. According to the published roadmap, HMD has also released Android Pie for Nokia 3.1/3.1 Plus, Nokia 5.1, and Nokia 6 (2017), Nokia 6/6.1 Plus, and Nokia 7 Plus. It’s great to see so many Nokia phones being upgraded to Pie in a timely manner.

So there you go! You have just been able to manually install the Android Pie update on your Nokia 5. If you have any questions about this procedure, please feel free to drop a comment below.