Xiaomi has finally released Android 8.1 Oreo for the Mi A1. You can now download Xiaomi Mi A1 9.6.3.0 Oreo update with June 2018 security patches. Follow the instructions below to install the TWRP flashable ZIP or Fastboot ROM right now.

The phone, also the first one from Xiaomi to be based on the Android One program has always received constant software updates every month. The first Oreo firmware was available for the device during late December, in 2017. And now, after months of rumors and patience, users can now install Android 8.1 Oreo on Xiaomi Mi A1. The new update carries June 2018 Android security patch and is now rolling out over-the-air. But like any other software upgrade, it will be reaching out to the devices gradually. If you’re keen on upgrading your phone right now, then we are here to help. The tutorial below will help you download and install Xiaomi Mi A1 9.6.3.0 Oreo update right now. 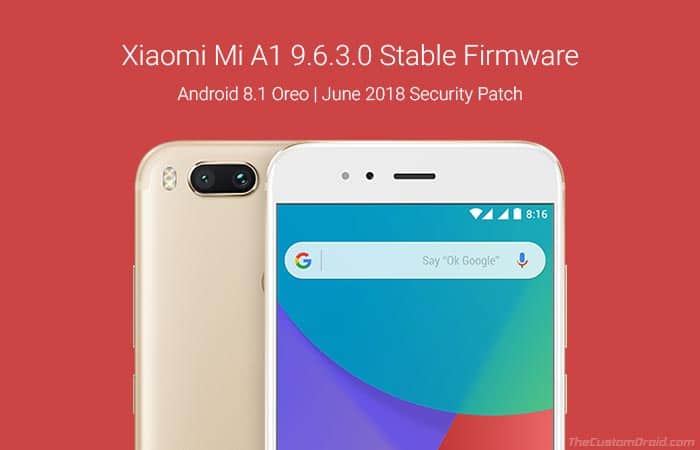 Update (1 July 2018): The update was pulled back due to some major bugs. More information here. The bug fix release should be live in the coming time and we shall update this post with the corresponding links and instructions.

Other than that, the OTA notification doesn’t mention any major changes, officially. However, since the update is based on Android 8.1 Oreo, you shall see several visual changes and internal performance upgrades, along with bug fixes. We have managed to gather almost all the visible major changes that can expect from this new firmware, all of which are listed below.

The new update doesn’t bring Project Treble support for Xiaomi Mi A1, as previously speculated. Also, there’s still no camer2 API support present yet. Which means, you will still need to go through unofficial ways to enable it.

Thanks to XDA Senior Member Displax, you can now download Xiaomi Mi A1 9.6.3.0 Oreo update based on Android 8.1 Oreo. You can either install the flashable ZIP using TWRP or use the Mi Flash tool to install the fastboot image.

Update: Unofficial TWRP and Fastboot links have been removed by the uploader since the official Fastboot Image is now available. So, download the Xiaomi Mi A1 9.6.3.0 Fastboot image and install it using the Mi Flash tool.

As always, there are two different methods to install Android 8.1 Oreo on Xiaomi Mi A1. Method 1 will help you install the flashable ZIP using TWRP. Or, you can use Method 2 to flash the fastboot image.

When the phone boots, it shall be running the latest stable 9.6.3.0 firmware with June 2018 Android security patch. Overall, the system should now be more fluent with performance and battery life. After a lot of patience, users can finally install Android 8.1 Oreo on Xiaomi Mi A1 and enjoy all the latest features. The update might have arrived pretty late, at the end of the month of July, but was still worth the wait since it arrived with a major Android version bump.

So, you have finally been able to download and install Xiaomi Mi A1 9.6.3.0 Oreo update. If you have any queries regarding the process, please leave a comment below to let us know.